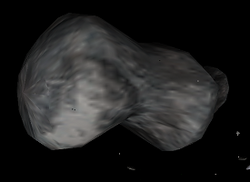 This OXP adds more models and textures for asteroids to the game. The graphics for the new types of asteroids are based upon asteroids in the Real Life Sol System.

Some of the new types of rocks are really big, requiring a sustained laser volley to pulverize and are marked by your ID computer as a "Large Asteroid". In the native game there are two types of asteroid. If you play with this OXP installed then more variety is added to the shapes and sizes of the asteroids you encounter as they have 15 different textures and models. The chance and number of boulders being formed when an asteroid is destroyed also varies for each type of asteroid.

The OXP also adds an asteroid related mission, well suited to a novice commander in Galaxy 1. You are docked at a station near Lave, in a system well known to suffer from asteroid storms. Sure enough, as you drop off your cargo, you hear the sound of small asteroids glancing off the Station's shields. Suddenly all hell breaks loose, Commanders running for their ships leaving their cargo behind!

A vast asteroid has been detected approaching the Station. It is so massive that if it strikes, destruction of the mighty Dodec is certain. Will you stay and help or get out of Dodge? The mission has three possible endings depending on your actions. The mission will trigger when you are docked at a certain system within 7 light years of Lave and are ranked at least "Above Average". Checking your F7 screen will give you a clue as to where the mission takes place.

The OXP was scripted by LittleBear, featuring new asteroid models and textures by Charlie.

An asteroid can be destroyed with any weapon and a small bounty is paid by GalCop for ridding the space lanes of a navigational hazard. When an asteroid is destroyed it often splits into chunks of rock, identified by your ID computer as a “boulder”. These boulders are too large to fit through the mouth of a Fuel & Matter Scoop. Commanders who merely vaporise boulders are however missing out on a potential source of wealth. Canny Commanders cut "boulders" into “splinters” and scoop them!

This is where a Mining Laser comes into its own. Fire on a boulder with a combat laser and you are likely to vaporise it. A Mining Laser will however cut the boulder into “splinters”, which are small enough to be scooped with a Fuel & Matter Scoop. An Ore Processor is highly recommended to extract the most valuable materials from the splinters scooped.

Standard Mining Guild procedure is to fit a Mining Laser to the starboard or port view. First fire on the asteroid with your fore mounted combat weapon to weaken it. Then use your Mining Laser to split the asteroid into boulders. Cut the boulders into splinters with your Mining Laser, and these small chunks of rock can be dredged aboard with a Fuel & Matter Scoop. If you have an Ore Processor fitted, the materials from the splinter can be further refined.

"Noob". The new asteroids are no more a threat to the player than standard asteroids; the OXP just adds a greater variety to the graphics and makes some asteroids more valuable to mine. The mission featured by the OXP should not put a young Jameson in any great danger, although to complete the mission you would probably need a Beam Laser or better and a couple of Standard Missiles.

If you are updating from an old version of Asteroid Storm OXP, then the first time you load up Oolite after installing hold down the SHIFT key until you see the rotating Cobra Mk III on the start screen. This ensures that Oolite’s cache is updated.

With 1.79's populator it's quite possible to put a station near the to-be destroyed station, so that it will be the main station after the disaster and ever after. I've done it with a SuperHub and it seems to work ok.

If the Superhub.oxp is installed, this hack will put one of them in Leesti. If the worst happens, the system is not wiped clean, but instead the Superhub nearby will be promoted to be the main station.

Here's the modified AsteroidStorm.js. Just replace the one in the original with this one. You also need the Superhub oxp by PAGroove.

Since in its current form this OXP breaks stuff, this simple solution might be something to consider for a new version. (Spara, 2014)

Reference: How to tweak OXZ's