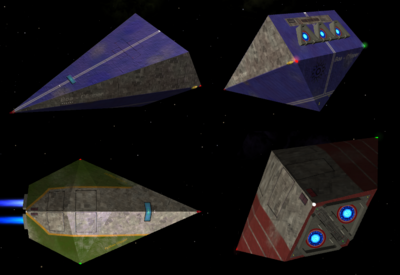 From the one style of expression, Smivs chose to cultivate the simplistic retro style

The acronyms RELOP and PROHIP compress the concepts of Retro Low Poly and Progressive High Poly, referring to the low or high number of polygons used in the polygon mesh of a computer graphics model, and whether the style of its use looks back to nostalgic ideals, or forward to push technical and creative boundaries.

While the defining threshold of what is a high or low poly count is a subjective one, – and this has increased greatly with time and advancement in technology – in terms of Elite and Oolite, there may be found a relative scale considering the very seminal wire-frame 3D graphics from which Elite came, to the possibilities that are now available in Oolite. 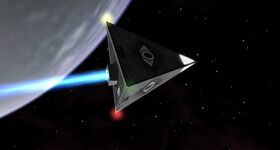 The Skink has 4 faces; can the envelope be pushed further?

Elite gave birth to the stylised low poly space ship. Exactly to what degree the technical limitations of the times dictated the visual choices that were made, we just don't know, but in any event it gave birth to a style.

The famous classical Elite ship shapes average around a dozen polygons, and with time, these recognisable geometric shapes came to have meaning. The sight of a particular shape and one's ability to define the significance of that shape was central to the experience of Elite, and continued with Oolite from the beginning.

Now, although the possibilities of creating shapes have considerably fewer limits, some enthusiasts opt to look back in reverence to the original simplistic form, as an essential part of what makes Elite/Oolite unique. This is the RELOPy school. 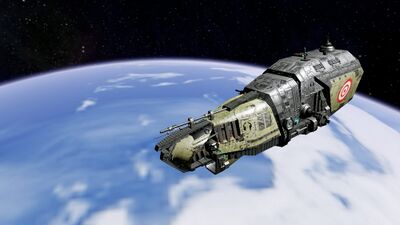 At the other end of the spectrum –the Griff Boa, famously featured in the "Oolite - It's not just for triangles anymore" thread 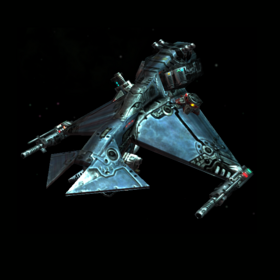 The Griff Krait, another demonstration of the pinnacle of high-poly visual pleasure.

What amounted to prudent use of polygons in the early 2000s isn't the case decades on. With a larger polygon budget, the possibilities for detail are expanded.

The use of the term "high poly" is here exaggerated, because in another context, even a smoothly detailed object like the Griff Boa may be considered low poly. This isn't a case of Pixar models using supercomputers to render images, but it is a stylistic difference.

The smartly designed PROHIPy object isn't indiscriminately high poly but still made a with modest polygon budget while making shrewd use of the mapping tools available to complete the illusion.

Nevertheless, this is a stylistic choice of pushing forward to shape objects with more ornamentation, greater detail and realism, which is the essence of the PROHIPy school, or as the French would call it, École Griff.