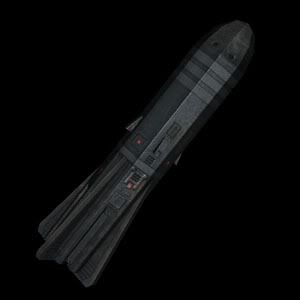 Missiles are a powerful (and often underrated) addition to a ship's armaments. They are flexible, and can be used for either offensive or defensive measures. There are two kind of missiles that can be purchased - the standard missile, which costs 30 credits and is available from almost anywhere, and the ECM Hardened Missile, which costs 350 credits and is only available from star systems that are tech level 9 or greater. In today's combat environment, standard missiles are of limited use.

Missiles are augmented greatly by some items of extra hardware. To make the most of missiles, the following equipment is required:

Missiles can still be used without these - however, you are giving up a great deal of the missile's usefulness without this equipment. Tactical advice contained within this article generally assumes you have the equipment listed above.

As stated earlier, standard missiles are of limited use in today's combat environment, when virtually any ship prepared for combat will carry an ECM. Standard missiles are almost always destroyed by an ECM. However, they are not entirely useless.
Note that kinetic damage is also relevant - a missile fired at you from a facing ship will do more damage than one fired from a ship behind you while you are fleeing it.

Since they are so vulnerable to the ECM, the advised method of firing standard missiles is to target the enemy ship, and fire a single missile. If the enemy ship does not ECM the missile within a few seconds, you are probably safe to launch further missiles at this target. ECM-less ships are likely to either be small or damaged, and can probably be dispatched with a single missile. Use this missile to allow you to concentrate on other targets. Avoid firing missiles at other ships until the first missile has detonated - if your next target carries an ECM, it is likely that his ECM will destroy the missile you already have in flight. While your first missile is flying, it reduces the number of combatants that are attacking you by one since the ship you launched the missile against will be engaged in avoiding the missile rather than shooting at you.

Standard missiles are cheap, and can be used almost as 'chaff'. If another ship launches a missile at you, and you are either going to take heavy damage (or not survive at all) if this missile hits you, launch a missile at your attacker. If your attacker carries an ECM and launched a standard missile at you, when he ECMs your missile - he will also destroy his own missile. If the other ship does not have an ECM and there are other enemies, fire missiles at the other enemies too in case they carry an ECM.

It's a matter of economics whether you use these or not. Unlike standard missiles, these almost always get the job done - it is rare that an ECM can destroy a hardened missile. Whether you use these pre-emptively or only in desperation is largely dependent on what you can afford and the risk posed by your current enemies. One thing is for certain - a hardened missile will occupy an enemy for at least a minute (the usual maximum flight time), and will often make witchfuel injector equipped enemies flee.

If your ship is a large and cumbersome cargo carrier, the profit made on each trade run may be sufficient that if you fire all your hardened missiles, you still make a reasonable profit. In this case, it's often best to use the missiles pre-emptively rather than risk hull and equipment damage (which could make you vulnerable to further attacks). If your intention is battle with cost as no object (such as military or mission use) then pre-emptive use makes sense. If you are a bounty hunter or a small trader, it is best to keep hardened missiles in hand until you really need them - or you'll end up just losing money. A full rack of missiles for a typical small trade ship or fighter is 1400cr - more than an energy bomb!

Since you can be confident that your missiles will survive for their full fuel burn time, it is often advantageous to fire several hardened missiles at once. It's not recommended to use more than one missile on a single target (except in desperation) - this is a huge waste of resources. For better shielded targets it is not a bad idea to fire a hardened missile, wait for the target to use their ECM, then follow up with a standard missile. It's quite likely that the target won't bother firing its ECM again, and will be hit by both missiles. Don't bother doing this if the target flees - even cheap standard missiles shouldn't be wasted. If you do follow up with a standard missile, the advice about not firing any more missiles at other targets applies since they may ECM your standard missile.

If you are carrying nothing but hardened missiles, and are attacked by several ships (a typical pirate attack), it may be to your advantage to fire several missiles at several targets. This will immediately free you up to attack further enemies. How many missiles you fire really depends on the situation. Use your multi-targeting system to line up a target for each of your missiles, and then fire off a couple. This will immediately stop or seriously degrade attacks from two of your enemies. Concentrate on another enemy with your lasers. If it is still 'too hot', fire off an additional missile (or two, depending on how many enemies there are) which you have pre-targeted. Missiles can take out a Cobra Mk.3 in one hit, or seriously damage larger ships such as a Python.

Using the multi-targeter and hardened missiles is also a good tactic to employ when you are ambushed by Thargoids. The missile is strong enough to seriously damage a Thargoid warship. Since Thargoid warships will spew Thargons (which also will attack you), line up the motherships with the multi targeting system and fire all your missiles. Thargoids do not break off their attacks when a missile is pursuing them - but it will seriously weaken the motherships allowing you to destroy them before they destroy you.