One shot hyperdrive engines, used to make one jump to another level galaxy of which there are eight.

A Galactic Hyperdrive doesn't use any fuel (all the fuel is contained in the device) and can be purchased for 5,000₢ at any planet with a tech level of 11 or over. Due to difficulties in long-range communication, criminal records are not shared between the galactic sectors: so regardless of your criminal rating, you come out Clean when you emerge into a new galaxy. Thus the Galactic Hyperdrive is sometimes used by mobsterpilots to escape prosecution.

In Oolite, the Galactic Hyperdrive warps you to the nearest chart location that matches your previous one. That means, if you are at the corner of the galaxy in Galaxy 1, you will end up at the same corner of Galaxy 2 after the jump. If your arrival would leave you in a very isolated region (for example systems like Oresrati in Galaxy 8, the lower left hand cluster of systems in Galaxy 7, the two islands of isolated systems in Galaxy 6 etc.) then your arrival point is moved to the main cluster.

For "all systems reachable" the default relocation behaviour of Oolite is disabled and your arrival system will not be changed if you arrived in an isolated region of the chart.

For "fixed coordinates" the engine will look in planetinfo.plist for a key named "galactic_hyperspace_fixed_coords", from which it will read the actual coordinates that will be used as arrival point in the next galaxy. If none is found, then coordinates (96,96) will be used, as in the Classic version. 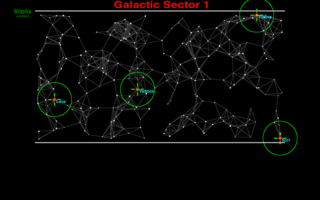 For the BBC Micro version of Classic Elite, the Galactic Hyperdrive entry points are fixed for each galaxy:

The system chosen is the one encompassed by the smallest rectangular search box centred on (96,96). The choice of '96' was driven by the desire to generate an '0x60' Op-code in this vicinity of the 6502 machine code, an RTS command that could be reached by nearby branch instructions. The observation that the system government is either Anarchy or Confederacy appears unrelated as the connection to the coordinate calculations is indirect.

In a text-only trading version of Elite coded by Ian Bell in C around 1999 the planet number is conserved across a galactic hyperdrive jump. These are listed in the planet list but are not visible to the player. This choice gives the appearance of random, but predictable, entry points (determined by your departure planet). This choice allows access to the large isolated island of systems in Galaxy 7 and is responsible for the the ancient warning "If you leave Galaxy 7 from Rainza you will end up at Oresrati in Galaxy 8".

This choice was implemented in some post-classic versions of Elite, including ArcElite.

Why only one-way travel? See the discussion of Cody's theory in The Eight.

Some older fanfiction/technobabble on Elite's engine drives can be found here .