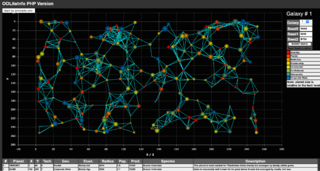 Although this list was taken from Oolite the data applies well to the BBC Micro version of Classic Elite, and some other versions.

The format of the entries is:

Where do these crazy names come from?

If you read through the source code and/or binary for either Elite or Oolite, you will not find any text containing the list of planets and their properties. The entire universe (including the famous edible poet) is constructed programmatically (using a truncated Fibonacci function) from a handful of seed numbers and the strings "ABOUSEITILETSTONLONUTHNOAL" (used by the planet description string) and " ' 'LEXEGEZACEBISOUSESARMAINDIREA'ERATENBERALAVETIEDORQUANTEISRION" which is used both by the planet description string and to generate all the system names in the 8 Galaxies (the single quotes indicate placeholders where the planet name generation can be terminated early). The algorithm was reverse-engineered from the original BBC disk by Christian Pinder, and implemented in Objective-C for Oolite. Further details are given in the discussion of Elite's random number generators.

Zipped set of all 8 Vector Maps

Zipped pack of simplified version of "The New Galaxy Guide" in HTML format (all sectors, for offline usage). Requires a browser that handles HTML5.