Archimedes Elite - or ArcElite as it's commonly known - is an implementation of Elite for the Acorn Archimedes platform. It is a bottom-up rewrite of Elite for the Acorn platform developed by Warren Burch and Clive Gringras, and based roughly on Elite-A, although it contains a number of alterations and additions from the original Elite series so that many people don't consider it part of classical Elite canon. Additions and changes include the Asp II custom edition (note the original Asp MkII is still in play), Boa II (the original Boa has been removed), Bushmaster, Caiman, Copperhead, Hognose, Moccasin (at least two clearly distinct variants exist), Racer, Urutu. The Urutu is often considered to be the same as the original Elite Constrictor, although visually it is similar to the Bushmaster. Despite these, Archimedes Elite is, however, widely regarded as one of the best implementations of Elite.

ArcElite is perhaps most famous for being the first non-player-centric version - meaning that the AI would fight amongst itself and pursue its own interest. The player was no longer the centre of the universe. From the AFE FAQ: "Now you can encounter pirate packs battling it out for dominance of their private patches, traders under attack, Bushmaster mining vessels smashing asteroids into chunks and scooping up the pieces, vipers towing disabled ships back to the station, vipers flying along in formation looking for some lawbreaker to fight. There are even other ships like yourself - Cobras armed to the teeth looking for pirates to fight, to boost their Elite rating. A considerable range of new ships, all with their own unique characters. And then there's the oddities."

To quote from Mark Rowan:

"Archimedes Élite for the Acorn range of computers is probably the best conversion of the original BBC Elite ever seen. It has full-colour solid 3D graphics, excellent sound effects, and gripping gameplay. There are many different types of spaceships - lots of pirates, traders, bounty hunters and, of course, police in their powerful Viper ships - all with their own different characteristics. Game play is enhanced in many ways over the original BBC Micro version, for example pirates and police have their own skirmishes in the distance which you are welcome to join in, rather than your ship constantly being the centre of attention as it is in the BBC version!"

There are four scripted missions for ArcElite:

Mission: You get hired by GalFam to drop an ecology seed capsule on a starving world to revitalise its economy. To succeed, simply jettison it while facing the planet at very low altitude. First, of course, you have to go and pick it up...

Mission: A respected member of the Tri-Alliance (Note for TEP members - in those days, the Thargoids were the baddies) has been running plans to the enemy. Find him and kill him. You are told where he was last seen. Zartid flies blue gullwing-like ship, and is escorted by a small fleet of Mambas. If you take too long to kill him he gets reinforcements.

Reward: Yaw boosters. These turn a good pilot into a deadly pilot. In the right hands they can improve laser accuracy by as much as 50%. Best used with mouse control - right hand on the mouse, left on the cursors.

Mission: You have killed Zurid‘s father, the infamous pirate Rantan Pino. Zurid has stolen a top-secret Cobra with a cloaking device and missile autolock and is coming to get you. Zurid flies a red-brown cobra which does not appear on scanners and has 8 missiles. Another difficult fight.

Reward: Missile Autolock. A little cross on your current missile target and a lot of pose value.

Mission: Travel around the galaxy gathering components for a medical cure. The chemicals may have various side effects - one makes you likely to explode if you get too hot sun-scooping, another seems to increase the damage of enemy lasers to your shields and energy, and a third reacts with any of the others if your shields are reduced to nil while it‘s in the hold. Advice: As soon as you find the mixing centre, drop off the more troublesome ones!

Other features unique to ArcElite

(Mostly taken from the AFE FAQ)

Navigational aids for the lost spacer, these are a feature of ArcElite only. Brightly coloured tetrahedrons registering as cargo on the scanner, no benefit is gained from shooting them, and they do not appear on the hold contents register when scooped. They do take up 1t of storage, however, and cannot be shifted short of using an escape capsule. Space beacons do not stop you jumping. 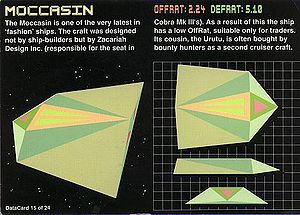 Mentioned on the Moccasin card in ArcElite Gold, this is the name frequently associated with the yellow ship with a grey underside and green nose border and triangles on its back. This ship is rectangular with a rounded nose and may be pirate or trader. It is almost as fast as a Cobra and very manouverable.

Notes released on an Acorn Computing cover disk pertaining to be documentation of the state of the game, however, suggest otherwise, recording that dredgers may have been included in some of the jump-emergence event possibilities. Maybe these ships are dredgers. They certainly seem meaner than your run-of-the-mill bad guy. However, dredgers are apparently huge. This ship just doesn't seem big enough.

On the other hand, there are two very distinct forms of Moccasin and it is possible that the one not on the card is the Urutu and that the green and yellow ship is a dredger. After all, the Urutu is described as a close cousin of the Moccasin. For convenience I refer to them as the Moccasin, Special Moccasin and Urutu.

ArcElite only. These ships fly in erratic circles. They are mentioned in the handbook. From the game's perspective, they are in fact trying to shoot themselves!

ArcElite only. Harmless weak unarmed ships originally created for target practice by the navy and bought up en masse by a religious sect who fly around dangerous planets spreading the word. Darwin in action.

Sometimes, the unexpected can flash up on the bottom of your screen. Watch out for:

REPENT, SINNER! REPENT! - cried occasionally over the radio by missionaries in hognoses.

MEGAWEED!!! - displayed occasionally upon scooping a cargo cannister. A particularly potent narcotic. Sells as normal though.

WHY DID THE GROIGAN DANCE? / WHY WAS THE KANGAROO HAPPY? - Thargoids ambushing an unlucky pilot in witch-space.

If you bring up the info window in desktop and leave your pointer on the copyright message, you get a scrolltext. Apparently one of the names credited is that of the Mad Hatter, of Micro User Elite column fame.

If you attack a ship with escorts, it does a runner while you fight them.

At Tech Level 8+ if you have no docking computer, you can press C anyhow and pay a charge of 50CR for use of the remote Rentadock. This puts rather a dint in the income.

There are a number of worthwhile expansion modules for Elite and one such gives you a pair of fluffy green dice hanging in your front viewscreen, which swing when you bank left or right. You also get a customisable rear-screen sticker which reads (in reverse), "My other ship is a Thargoid". You can edit this for whatever you wish. Other expansion modules simply include cheat modes and functions. You can find all of the cheat and expansion modules on Gold Edition's ArcElite download page. Also there you can find an enlarged version of the rear window sticker, which has also been used to print an ArcElite t-shirt.

You can find more information (including technical information) relating to ArcElite and also to the missions at Jason Togneri's site, Gold Edition - the technical information is kept in SparkFS (Acorn archive format) archives at this location. Note however that the SparkFS archives have been appended with the .zip extension so you can play with them in Windows a bit if you like.

Other sites hosting useful information on ArcElite include Simon Challands' Acorn Elite Pages, and Mark Rowan's Elite Pages. Sadly the AFE FAQ is no longer available on Rob Pfeifer's site, but a copy of it can be found here on the Elite Wiki.