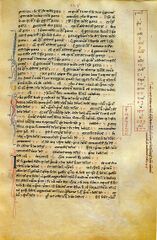 Apart from the New Cathedral and the Doges' Palace (entrance can be negotiated with the Ducal Guard for a price), the Guild Hall of the Society of Orphans is on every visitors list. A minor guild, it harboured Francesco della Rindola, a famous sculptor whose works grace many of the palaces in The Eight. He carved twenty-seven of the doges from polished sandstone, with a breath-taking command of fine details and nuance. One can almost see the whiskers of Doge Alberto III quiver in the icy winds above! The Guild Hall contains all of della Rindola's ducal originals, which can be viewed for a modest sum which goes to the upkeep of the current orphans.