Oolite is an Elite-like space sim game, originally written for Mac OS X. Stable ports for *NIX and Windows (XP, 2000 and Vista only) exist, and ports are also available for SGI IRIX and FreeBSD on Intel architectures..

It was written by Giles Williams as response to the withdrawal of Elite: The New Kind from the internet. Although inspired by the work of Christian Pinder, following David Braben and Ian Bell, the work is an independent interpretation and expansion of the original game.

Oolite is designed as a small game that is easy for users to pick up and expand upon. Almost every aspect of the game can be modified using simple, free graphics packages and text-editors.

The game and source-code are offered for free under a Creative Commons License. One of Giles' priorities for development was to separate the game engine from the game materials (graphics, models, AI, text-strings etc.) 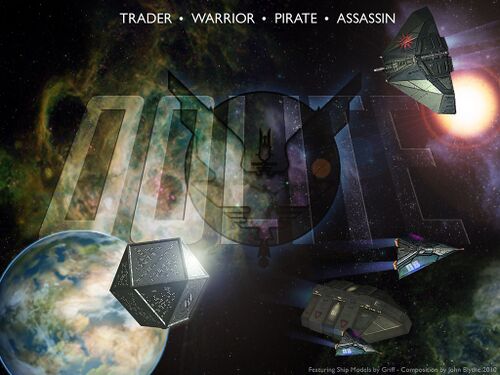 Oolite follows the original Elite rather than Frontier: Elite II or Frontier: First Encounters. It is set in the Classic Elite universe, with the features found in the classic Elite universe (systems and the descriptions of systems generated by an algorithm, rather than text that the author has written). Like classic Elite, there is a single planet per system - although the game allows authors of add-ons to add multiple planets to a star system. Like classic Elite, the flight model is non-Newtonian - meaning the spacecraft handles like an "aeroplane in space". However, this can be thought of as a complex flight computer helping the pilot as the game engine itself allows for real-world physics, for example, during collisions. This can lead to some interesting flight characteristics when the player survives a collision (especially with a Hognose Tugship).

The game can be expanded in a number of ways with an OXP (Oolite eXpansion Pack). This takes the form of a directory with the extension '.oxp' that is placed in the AddOns folder. The Expansions Manager adds in '.oxz' expansions which are stored in the Managed AddOns folder. When Oolite is launched, it scans these folders for expansions, and loads them.

An OXP can contain new ships with custom AI and textures as well as new missions. Some notable OXPs have been to replace the space stations in Tech Level 13+ planets with a "2001-style" Torus station, and the Tionisla Orbital Graveyard from the novella, The Dark Wheel.

Portability to other operating systems

The game was originally written to use OpenGL and Cocoa (the Mac OS X toolkit) in Objective C. In April 2005 a porting project was started by David Taylor and Dylan Smith. The port uses OpenGL and the GNUstep Objective-C library. The first stable version was 1.52, released on 24th September 2005. Substantial parts of the graphics output were changed to use SDL (Simple Directmedia Layer), a cross platform game library. This is portable to any Unix-like operating system that supports OpenGL and GNUstep, including back to Mac OS X as a Cocoa/SDL application. The game has been run on the PowerPC, Intel x86, AMD 64 and MIPS processor architectures.

Getting and installing Oolite

The following articles contain detailed information about where to get and how to run the game. There is also an additional section in these pages on how to build from source for those who are inclined to explore the technicalities of the game. 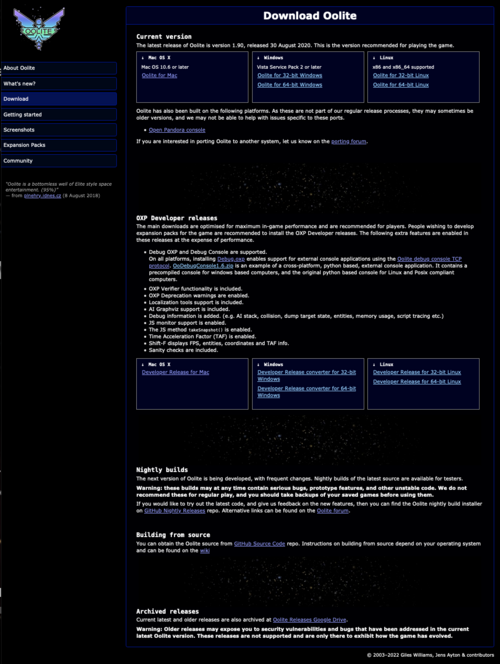 The three varieties of Oolite are produced for each of the 3 platforms/operating systems. See here for the Downloads.

These contain extra facilities for OXP developers: they slow the game down a little but help track down errors in the OXP code. See, for example, Debug OXP.

These are the current experimental versions of Oolite - as they are updated and bugs are fixed, new nightlies are generated. While no longer true for AppleMac/Linux, for windows a new GitHub code commit will generate a new windows nightly in some 8 minutes or so.

Note that there is also "An alternative binary distribution" for windows: this is based on a nightly and contains a handful of the more visually attractive oxp's - it is a display version of the game, designed to be run from a memory stick. This has been published approximately yearly since 2017.

The following article contains information about what to do to get started on Oolite development: Developing Oolite.

The original Oolite was created by Aegidian, or Giles Williams, who began logging his early programming in April 2004, releasing the first of a series of alpha test versions on May 23 while simultaneously launching the Oolite Bulletin Board. Quite instantly he was met with enthusiasm and willing testers. The Beta 1.0 was released on July 2, and the new website was up on July 12.

He had rewritten it from scratch for the AppleMac. There were a number of changes from Classic Elite - the speed of the Cobra Mk.III & the Moray, and the introduction of the buoys at the witchpoint and the orbital station - for example. The crucial difference seems to have been the introduction of OXPs. These enabled the game to be modified to the player's wishes, as they still do today, and used Legacy Scripting. Giles rewrote the game code to allow new ships & stations to be introduced, new missions, new HUDs, new sounds etc. Some of the early .oxps were published on the various Oosat websites. The excitement this created in the old Elite gaming community was substantial, and soon others using different platforms started to adapt the AppleMac version for Windows & Linux.

The first stable release was v1.65 in October 2006. See 2006 In Review. Giles then retired from the fray, passing the baton over to Ahruman/Jens Ayton in Sweden.

In 2006 there were no space dredgers, no famous planets, a half finished TOGY (Tionisla Orbital GraveYard), and the coolest ship to own was the SuperCobra. There was no fiction section in the forum, no maps, no ship guide, no oxp guide. There was a single piece of Oolite fan-fic - 'The Virtuous Misfortune' by Dylan Smith on the Oolite wiki. There were no shaders, no wireframe, no javascript... there were more bugs.
This had all changed by 2011.

Loss of History: There were two important events which led to loss of information/oxp's.

When Oosat2 disappeared some years ago (2006 & 2010), the old .oxp's on it were lost. All we have now is an archived first page with dead download links. LittleBear managed to save almost all of the oxp's - but not their ReadMe's.
Many early threads were lost due to the Great Deletion where threads would be deleted after a period of inactivity. (See: We are losing our collective memory Aug 2008)

Jens spent these years reformulating nearly all of Oolite's code and he effectively redesigned the game's entire architecture, making it 21st century ready. This caused massive improvements in pretty much everything from performance to graphics to gameplay and so on. Jens wasn't just another programmer in the project, he was THE programmer in the project. This included introducing shaders, for better visual effects (v.1.67/1.68: 2007). Jens also brought in JavaScript for OXPs (with v.1.68), allowing more sophistication. And he was a fearsome partisan for Yaw in the Roll vs Yaw crusades‎, introducing it into Oolite.

As well as the emergence of Jens, other people starting doing things too. Such as the dream team ship modellers who started rejigging the basic ship set for Oolite (as shaders were being introduced), and the rise of Lestradae around 2009. Lestradae] caused much excitement in proposing a mega-OXP unifying all the ship oxps Realistic Shipyards (RS) and another unifying all OXPs The Oolite Extended Project (OE). He pushed for the rejigging of elements of the Ooniverse - such as the upgrading of Sector1/Sori (TL9 Dictatorship) to Ascension - a TL16 Anarchy (and similar tweaks for other Galaxies!). He was hailed as second only to Aegidian & Ahruman in his impact on the game. Alas, ...

Version 1.76 was an important release, coming out in Dec 2011, with a tweak (v1.76.1) the following May. Jens had nick-named it "the MNSR" (Mythical Next Stable Release (after 1.65)), during the long years of development. Some of the then development team at that time (Aegidian, Kaks, Micha and another_commander) even met up in a pub in London with some members of the community, fully equipped with laptops and stuff and did the release from inside the pub in full celebration. Versions 1.77/1.771 (2013) were the last of the 'old-style' versions.

The baton was then taken up by Cim/Chris Morris whose v1.80 debuted in June 2014 (v1.79 was the "nightly" precursor, the earliest versions coming out at the end of 2013). This introduced the Expansions Manager & the .oxz format - which on the one hand made life much easier for newcomers wishing to add expansions - but deterred the less adept from learning how to modify them! Earlier sustained debate about the feebleness of pirates led to the Great AI Revolution where the pirates were greatly 'beefed-up'. A lot of the core of today's Oolite is cim's work, including the Expansions Manager, the Tutorial, the new Javascript based AI, the incorporation of the new ship models by Griff / Captain Solo, the OpenAL sound support, the multiple lasers, lots of the scripting one finds today and more.

Verson 1.82 came out in May 2015 with slightly easier pirates due to the continuance of the sustained debate. Around this time cim developed another game using the Oolite mechanics - Song of the Labyrinth - which worked with v1.83.

Cim's term of office coincided with the emergence of E:D which naturally siphoned off a large proportion of the Oolite community. You can see how many people pledged support to E:D (often mentioned on their BB tags) - and the fervent discussions on the BB about whether Oolite would survive and whether E:D was any good. And also the appearance of .oxp's emulating aspects of E:D (and other games too) - Dertien's Cobra with retractable lasers and landing gear, the various E:D HUDs and keyboard configurations.

Cim faded away from being lead maintainer back into the joys of real life around 2015, leaving Another_commander, getafix & phkb as the surviving designers. Most of the recent work has been improvements in the field of graphics, although there have been other improvements too.

A synopsis of thinking about the future of Oolite is to be found on Oolite 2.0 or II

One of the interesting themes in the history of the development of Oolite is just how open and responsive the various Lead Developers - Aegidian, Jens & Cim - were to criticism of what they were doing. A number of the very early threads on the Bulletin Board make this point quite forcefully.