If you are developing OXPs, the Debug Console is a tool that you should keep handy at all times, because it enables you to test things that normally are either impossible to test without it, or require substantial effort to generate the right conditions for testing. Debug.oxp enables JavaScript console support in Oolite (1.70 and later). It also adds a menu with various debug facilities under Mac OS X.

To run this OXP you need the OXP Developer release version of Oolite. There are subtle differences between the versions for each of the three platforms (AppleMac, Windows & Linux).

On all platforms, installing Debug.oxp enables support for external console applications using the Oolite debug console TCP protocol. By default, it will attempt to connect to a console running on the same computer, but this can be changed by specifying a different console-host (and, optionally, console-port) in debugConfig.plist. For external console support on the same computer under Mac OS X, console-host must be explicitly set to “127.0.0.1”; if this is not done, the integrated JavaScript console will be used instead. For information on using a console (integrated or external), see Using the JavaScript console below.

Note: A cross-platform, python based, external console application is available in the Oolite GitHub project area.

On Debian or Ubuntu Linux you will need python 2.6.x installed and (at least) the packages blt python-tk tk8.5 (or the equivalents in other distros.)

Under Mac OS X, the Debug OXP provides a menu with various debugging options and an integrated JavaScript console, as well as enabling external console support as on all platforms. This was originally written by Jens Ayton/Ahruman for version 1.69 (TR) back in 2007. To use this you need the Debug OXP in your AddOns folder and the Test Release version of Oolite. 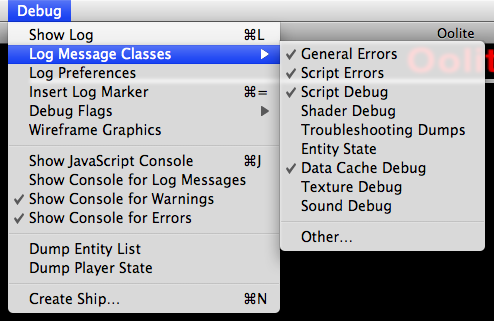 The Debug menu provides options to

Note: some of these features are implemented by sending JavaScript messages to the console script. If the script has been modified, some features may not work properly.

The Log Message Classes submenu can be modified by editing debugLogMessageClassesMenu.plist, found inside the OXP. This is merged from Config directories in the usual fashion. 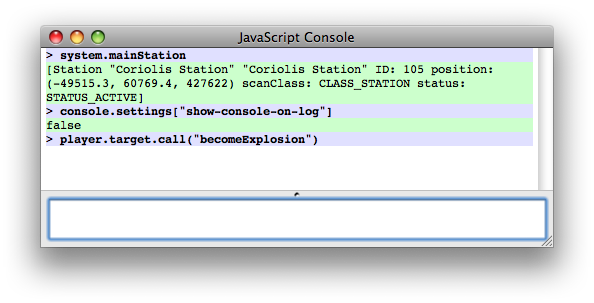 The integrated JavaScript console provides a window within Oolite which acts as a JavaScript console. It can be shown using the Show JavaScript Console command in the Debug menu, unless external console mode has been enabled by setting console-host in debugConfig.plist.

The integrated console has a 100-line memory. To see previous commands, press ⇞ (Page Up) or ⌥↑ (Option-Up Arrow). You can go the other way in the obvious manner.

Macros are a special type of command prefixed with a colon. Instead of being interpreted as a JavaScript command, a macro is looked up in a dictionary, and the result is used as the “real” command. For instance, if you enter the command :listM (short for “list macros”), the macro dictionary is queried for the string “listM”, and (by default) the code for (let prop in macros) { ConsoleMessage('macro-list', ':' + prop) } is found and executed. This code is called the expansion of the macro. The result is a list of macros being printed:

As you can see in the example, To see the expansion of a macro without executing it, use :showM:

When a macro with the word PARAM is executed, PARAM is replaced with any text following the macro name, surrounded in quotation marks. This is how :showM functions, for example; the string “:showM :delM” is expanded to “showMacro(":delM")”, causing the JavaScript function showMacro(), which is part of the console script, to be called. You can see the implementation of showMacro() by entering showMacro – without any parentheses – into the console.

An initial set of macros is loaded from debugConfig.plist. If you edit any macros, using :setM or :delM, all macros are saved in Oolite’s preferences from that point forwards. This means that you don’t have to re-enter any macros you write with :setM after restarting Oolite.

If you then type:

The macro will be expanded, and you'll see “Hello World” on the console. However, macros are not functions, so you cannot use macros in the middle of javascript, or as part of another macro.

The console has several properties. They are accessible with "console.Foo":

This means that the console’s behaviour can be extensively customized, for instance, by replacing the macro system with something more powerful. There are two basic approaches to doing this:

The latter approach has the advantage that it can continue to work with future versions of the console script, and multiple patches can coexist. For example, a modification to supplement the macro system with a better one might look as follows:

This same patching technique, incidentally, can be used to modify scripts at runtime, either from the console or from other scripts.