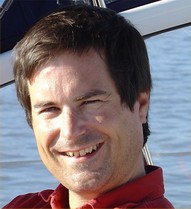 David Braben, co-author of Elite and owner of Frontier Developments

David Braben is the co-author of classic Elite (along with Ian Bell) and the author of Frontier: Elite II and Frontier: First Encounters. He is currently the head of the Cambridge company he founded, Frontier Developments, which has developed Elite Dangerous.

Braben met Ian Bell at Cambridge University while he was reading Natural Sciences (a Cambridge tripos ranging from Astronomy to Biology). David Braben pushed for more realism against Ian Bell's push for more playability. Developing Elite they were both constrained by the minute amount of computer memory available in those days.

With the development of Frontier, David Braben was able to introduce Newtonian modelling and a map of the universe in which we actually live (rather than the 8 galaxies of Elite). There were also no references to the non-human races such as the felines and the lobstoids. This has led to all sorts of fun for the people trying to work out a history linking Elite to Frontier (and then to Oolite and then to Elite:Dangerous) - see Lore & History.

In 2014 he was created an Officer of the British Empire (OBE).

David Braben got his nickname "The Breadbin" in the Elite community thanks to a publicity photograph of himself in his kitchen, in which the breadbin particularly stood out. (The original alt.fan.elite Usenet article that originated the "Breadbin" nickname was started by Rob Pfeifer on June 12th 1999 [1] )