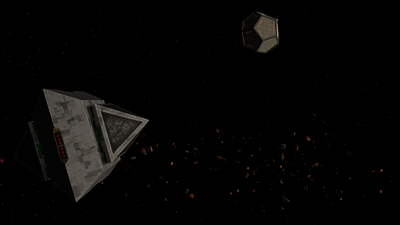 A view of the graveyard plus station...

"The best way to see the wreckplace at Tionisla is to approach it from the Sun (a reasonably safe thing to do since Tionisla, being a Democracy has few pirates in its system). Tionisla itself is a bright yellow world, and the cemetery is always between the planet and its star. As you fly close, the whole strange graveyard seems to be expanding from the circle of the world behind.

The first thing you see is a shimmering, silver disc, a double spiral of tiny bright points. It slowly turns: it's a galaxy in miniature, with the same intense blur of light at its centre, because here is where the biggest tombs are to be found.

Come closer and soon you can see that the stars in this galaxy are markers, great lumps of metal, heavily inscribed with the words and symbols of a thousand religions. The cemetery is a bizarre and moving sight. The markers are rarely less than a thousand feet across. There are chrome-alloy crosses, titanium Stars of David, duralium henges, and all the strange symbolic shapes of the worlds, and the minds and the faiths that have come to die in this star traveller's special place.

Tethered below this vast, rotating mausoleum is the dodecahedral shape of a 'Dodo' class space station, the home of the Cemetery Authorites. Here you go through security checks and get your visitor's visa. And as you stand in the queue, staring up through the translucent ceiling of the Customs Hall, you can see the battered, broken ships of many of the dead, still attached to the silent tomb that contains the body."

from Robert Holdstock's The Dark Wheel.

in the earlier versions there is no beacon at TOGY or at the dodecahedron station there (which would show up on an ASC), so it must be located by sight.

This OXP adds the Graveyard to the Galaxy 1 system of Tionisla, as described in “The Dark Wheel” novella.

As in The Dark Wheel, the Orbital Graveyard is positioned between the planet and the sun. The Graveyard features long dead Commanders buried in their rusting ships, monuments, Crucifixes, Stars of David and other religious symbols. A Dodecahedron station is positioned nearby.

Naturally, Krait patrols will make short work of any Commander desecrating the monuments!

This is a fourth TOGY oxp, adding memorials to deceased Commanders (much as Lave's Monument.oxp claims to). The memorials take the form of a golden Starbird. Written by Smivs (2013), it is available here. BB Thread is here. It was written for the 1st edition of TOGY.

To give the player a choice, the oxp is split in 3 parts. 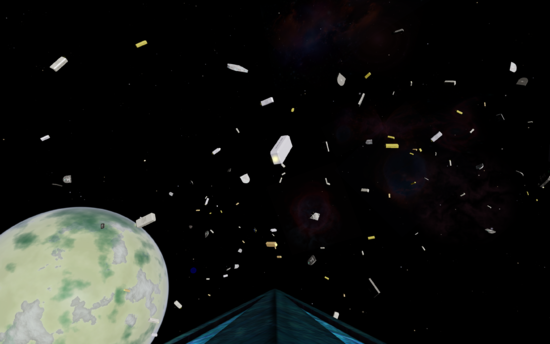 Basic TOGY without Monuments or Shipwrecks - for slower computers 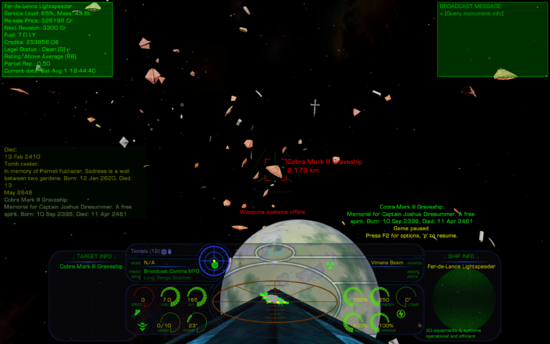