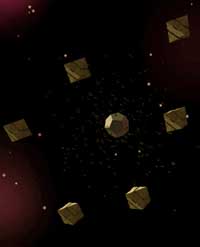 A view on the Graveyard

As described in the novella The Dark Wheel, the Tionisla system features a unique installation: the Tionisla Orbital Graveyard.

In this system, numerous tombs of famous and probably rich spacers, many of them with the ships attached to the ex-owners mausoleum, float in a shimmering disk around a Dodecahedron class space station, the home of the Cemetery Authorities.

Tionisla is well known in the region. In the past it was the scene of some of the most massive battles the galaxy has ever seen. The result? The huge Tionisla Orbital Graveyard, now the final resting place of the super-rich and famous. Due to their ingrained shyness all Tionislans wear masks in public, their heads completely encased in baroque constructions. If you like good company, noise, fun, excitement - go elsewhere. (Famous Planets OXP)

Tionisla Reporter is a starting mission for a new player

There are plenty of legends about Tionisla space station's orbit being boosted several hundred kilometers by a careless Hognose pilot, although the Tionisla authorities deny the event ever occurred.

The Dark Wheel is a novella by Robert Holdstock. It was included with the original game Elite. The novella tells us about Tionisla: 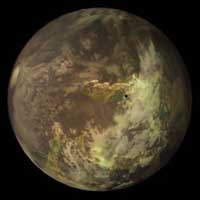 The Rough Guide to the Ooniverse has an entry on Tionisla.

The Dragon was originally designed by Pteradyne Tech, Aerospace Division for the Galactic Navy to serve in a niche role, somewhere between heavy strike fighter and light bomber, and as close-cover escort for heavy bombers and logistics details. However, due to more and more high performance attack craft and military grade kit being released on the civilian market and landing in the hands of aggressive outlaws, Pteradyne licenced Sirrane Starworks of Tionisla to begin limited production of a civilian version marketed to the bounty hunter community, to be sold only with proper background checks.

Nonetheless, a few Dragons have been reported stolen off the showroom floors. (Not to mention dealers that may be a little crooked and got paid extra to let the ships go sans security checks.) Though lacking the armor, enhanced performance, and exclusive military technology of the Naval version, the civilian models are reliable, rugged, and formidable ships, and with a skilled crew, is able to survive duels in the most lawless of anarchy systems.