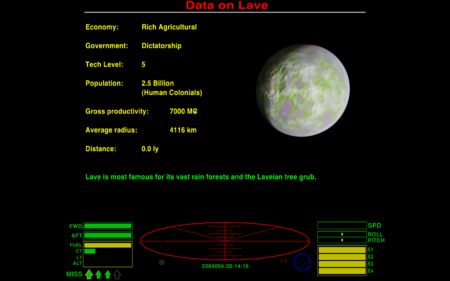 F7 screen from the Vanilla game 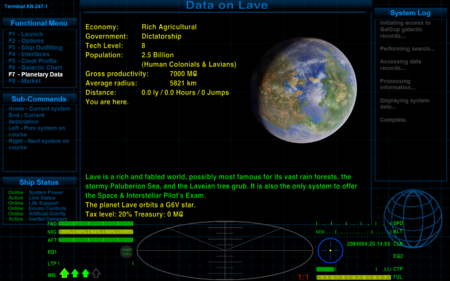 F7 screen after being OXP'd!
*FPO Lave not only changes the look of the planet in the viewscreens, but also here.
*System Data Config compresses the text at the top, leaving room for more data beneath
*Lave OXP bumps the Tech Level from 5 up to 8(!) and adds the extra green text description
*Sun Gear adds the first yellow star text description
*Diplomancy adds the second yellow text taxes description
*XenonUI adds the text in the margins - the helpful functional menu & sub-commands
*The HUD shown is the CRR-HUD (Coluber Red Racer): see Guide to Unlisted OXPs
*Smugglers would add details of trade embargoes (not shown)
*Bugs, glorious bugs would a bug purely to systems populated with insects (not shown)
The early HUD (2012) does not fit well with the later XenonUI, as can be seen

This page is accessible both while docked and in flight. It gives you information about a star system. The left and right arrow keys toggle between the current system you are in, and whichever other system you have selected on the F6 Galactic map screen.

The keys will also toggle between other systems on your route if you have bought and have just used the ANA (Advanced Navigational Array) to select more than just two systems.

This screen is primarily an information screen, rather than one where you make decisions.

There are a range of OXPs which change the look of individual planets: the older Lave OXP & Riredi OXP; and also the newer OXPs exploring the graphics changes with Version 1.90: FPO Lave, FPO Zaonce... and the rather more eccentric Lave is Earth 8k, Tionisla Is Mars 8k, Zaonce is Venus 8k, Diso is Jupiter 8k & Leesti is Moon 8k!

Adding to the page

There is no such page. Various proposals have been put forwards over the years (including a page of information about the system - planets, moons etc.), but ... nothing yet!

This sort of information is currently available on the F4 page (ship and system interfaces) - provided by OXPs such as LittleBear's Galactic Almanac and Spara's Market Inquirer.