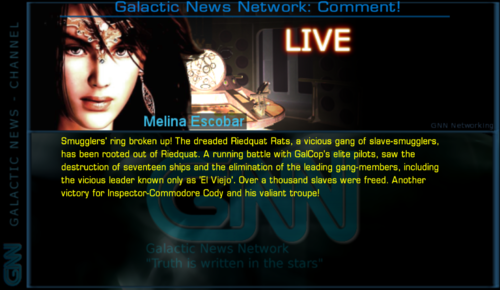 Historically, in both the original Elite and therefore in Oolite, there were three illegal goods: slaves, narcotics and firearms. These were illegal to export from all GalCop stations, and there was no variation or flexibility in those items. This OXP aims to expand what goods are illegal, making it far more variable. There are new interface screens to show what items are illegal and where, a new Black Market available from Rock Hermits and other stations, and new equipment items to aid in smuggling cargo.

It started with a single system.

Ceedra, an insignificant confederacy in an unfrequented arm of galactic sector 1. They had been receiving some contaminated imported food from the nearby Anarchy system Isdibi, possibly random or possibly intentional as a way to destabilise the government, it was difficult to tell. But a request was made to GalCop to put an import ban on food and force any traders that bring food to the station to hand it over for destruction.

The impact was almost immediate. Traders were outraged that their harmless cargo of wheat and grains were being taken away, which had never before happened in GalCop history, plus they received a bounty for doing so, doubling the pain. Messages were sent, trade delegations made an outward show of force, but GalCop's hands were tied. This was the decision of the planet in question, and under GalCop law they were perfectly entitled to impose import restrictions, beyond the export restrictions that had long been in place for slaves or narcotics.

Suddenly the floodgates were opened. System after system found reason to ban goods, from basic staples like food or textiles, up to the traders standard fare of computers, furs and liquor. Even precious metals were banned in some systems, often for rather obscure reasons. And always, once a ban was in place, the price would hit the roof.

Some commentators have suggested there is evidence that certain systems were requesting a good to be made illegal purely for the jump in price that naturally follows and the bump in traffic that accompanies extra profits. While GalCop have been sought for comment, none has been forthcoming, and nothing appears to be able to bring a halt to the practice. If systems are indeed creating spurious trade legalities, GalCop is not preventing them.

Somewhat inevitably, at almost the same time, an entirely new market emerged, beneath the radar of GalCop's far-seeing eyes. As soon as a good was declared illegal to import the price of that good sky-rocketed, and the temptation to circumvent the restrictions GalCop was forced to impose was too great. Dock masters became a particular target, being offered high sums to fiddle manifest registries. Shadier stations began to offer customised smuggling compartments that provided a way to hide cargo from the customs scanning equipment. Contracts to move illicit cargo were also available from these locations.

While it was always present in some form or another, now the Galactic Underworld became almost mainstream. The galaxy had changed.

This OXP aims to broaden the scope and appeal of illegal goods in a number of ways.

Illegal goods can now be any of the 17 different commodity types. So food might be declared illegal on one planet, computers on another. These things might change as well, so computers might be illegal for a few months, and then conditions are lifted and they are back to normal again.

Also, illegal trade goods will now be illegal to import(*). If you arrive at a GalCop station with visible illegal goods in your hold, you will be fined and your cargo will be confiscated. See also the section below on Bribing Officials.

Even if you plan to stay on the right side to the law, this OXP can add variety to the way illegal goods are handled by the game, and make the process of shipping cargo across the galaxy more interesting.

(*) Slaves remain illegal to export, and they are the only commodity that is illegal to export. The reason for this is that some escape capsules end up being transported as slaves, and it's unfair to penalise the player for potentially rescuing downed pilots. It is recommended the Illegal Goods Tweak OXP be installed so that captured slaves can be released. For other fixes see Escape Pod.

To help traders to work around these import restrictions a new piece of equipment, the smuggling compartment, can be purchased at non-GalCop stations (Rock Hermits in particular, but also other docking ports) in TL4 or greater systems.

This chance improves slightly once the "Phase Adjustment" equipment (available at TL7 or greater systems) is installed. With the phase adjustment equipment installed the phase setting of the hold to be adjusted, which can improve the chance of being undetected considerably. Phase settings can be picked up at black market noticeboard (which might be unreliable), or they can be purchased for a considerable cost. See also the Phase Scanner (below).

** Phase Scanner **
TL8 or greater Anarchy systems will sometimes have a Phase Scanner available for purchase. The scanner can, when aimed at GalCop main stations, detect what phase setting the manifest scanners will be susceptible to. Once you know what the phase setting is for a particular government and tech level they can set the phase of their smuggling compartment and it will be almost undetectable to GalCop manifest scanners.

The Phase scanner is used by targeting the main station, priming the equipment and then activating it. It will take a few seconds to perform its job, and will consume a large amount of energy in the process - a naval energy unit is required. If you are too close to the station, or you are moving too slowly, the station will detect the scan and a bounty will be placed on you. If you then dock at the station the scanner will be removed. If you are too far away from the main station the scanner will not operate. If a police vessel catches you performing a scan you will receive a bounty and may find yourself under fire.

If your scanner is damaged you must get it repaired at a non-GalCop station, otherwise the equipment will be confiscated and you will receive a bounty. If you have a ship overhaul performed at a GalCop station while the equipment is on board, it will be removed as part of the overhaul and you will receive a bounty. But see also "Bribing Officials" below.

** Import Permits **
While some goods might be declared illegal, you can still purchase a permit to import that good from the planet in question. Usually these permits are quite expensive.

Permits can only be used once, and will automatically be removed after use.

If your smuggling compartment is discovered during a renovation or when damaged, or you dock with illegal cargo in your hold, you can attempt to bribe the station officials. You will be asked to enter the amount of the bribe. If you pay attention to what the official says you can get an idea on whether a smaller amount will be required, but larger amounts will have a greater chance of being successful. If you are successful you will be able to keep all your cargo and equipment. If you are unsuccessful you will lose all smuggling-related equipment and may end up increasing the bounty on your head.

The Black Market noticeboard (see below) can be useful in finding systems where the dock master and other customs officials can be bribed for a reasonable amount.

** Black market **
When docked at most non-GalCop stations, and GalCop stations in some systems, you will find a new interface screen called "Black Market". This interface provides access to a number of options:
a. Noticeboard: View some of the messages from the black market news boards. Some are good, some aren't.
b. Smuggling contracts: These contracts will be smaller cargo quantities (less than 20t), and they will all be illegal at the destination system, so there will be a high degree of risk with each one. However, the rewards will be substantial, more than double what the cargo would be worth at the destination.
c. Purchase fake import permits: You can purchase fake import permits that may or may not work at the destination system. The chance is only a slightly better than 50%.
d. Purchase Rock Hermit waypoints: Finding Rock Hermits is important, as they are the primary location to access the Black Market. Waypoints can help you find a Rock Hermit in a given system.
e. Purchase phase scan settings: Not always available but occasionally a trader will offer their settings for a price.
f. Sell phase scan settings: If you have discovered a phase scan setting, you can sell it for some real coin! This will only be available once you have purchased a phase scanner.

** Dock master **
When docked at a main station, and when the dock master is available (he doesn't work 24/7!) from this interface you can ask him about any good milk runs he/she is aware of, or you can try to bribe them into changing your cargo manifest for you.

Additional commodities can be added to the system by doing the following:

This enables the legal/illegal flags to be set for each commodity.

In the commodity definition in your "trade-goods.plist" file, add the following line:

Note: If your commodity definition already has a "market_script" defined, you will need to copy the code from the updateGeneralCommodityDefinition function into yours, to perform the same function as the Smugglers version.

Because of the complex nature of this OXP, the possibility for conflicts is great, so please report any bugs or unexpected outcomes. Don't assume someone else has noticed it - if two people report a bug it makes tracking the bug down so much easier!

And it goes without saying that I'd like to hear from you if you have any suggestions on how the OXP could be improved.

At present, this OXP is incompatible with the following OXPs:

This conflict has been recorded in the manifest file, so if you have New Cargoes installed the "Smugglers" OXP will not load.

Place the 'Smugglers.oxz' or 'Smugglers.oxp' (extracted from the ZIP file download) into your 'AddOns' folder and when you start the game, hold down 'Shift' until you see the spinning Cobra.

With the help of:
Layne, Stormrider, Norby, cim, Diziet Sma, Cody, and all the people on the BB who offered suggestions and ideas to make this OXP as good as it could be. If the OXP fails in any way, is it because of my limitations as a programmer, not because of the paucity of your ideas and contributions!