Many times during exploration of the galaxies, commanders find themselves looking for a quick way to get to a certain destination planet. Route planning over long distances can be tedious and is often prone to trial and error: In some cases, distance between consecutive stops on the way to destination may be very close to the 7.0 LY fuel limit, creating uncertainty in regards to the feasibility of the trip. In other cases, destinations may simply be unreachable.

The Advanced Navigational Array (ANA) is a navigation computer software upgrade, designed to assist commanders in planning long routes on the galactic map. In its current implementation, it allows commanders to view the Interplanetary Connectivity Grid (ICG) for the galaxy they are currently in, plus an overlay of the shortest route to their selected destination. For versions of Oolite prior to 1.74, shortest route refers to minimum number of jumps required and not necessarily shortest journey time. Oolite versions from 1.74 onwards feature the shortest journey time route as well. The ANA allows in addition for a quick and easy way to spot unreachable destinations on the current galaxy.

The ANA is activated by pressing ‘^’ (Shift + 6) – or ‘!’ (Shift + 1) for Oolite versions before 1.69 – while on the galactic chart screen. The ICG and route to destination will be displayed for as long as ‘^’ remains pressed and will switch off upon key release. See images below for examples:

Selected destination is unreachable. Only ICG is plotted in this case.

Starting with Oolite version 1.74, it is possible to display also the shortest travel time route to the selected destination. To do this, press 'Shift+6' while the ANA is activated (from version 1.82; for versions 1.74 to 1.80, press 'Ctrl').

Starting with Oolite version 1.84, it is possible to display the different systems along a plotted route on the F7 screen by using the left/right arrow keys.

The Advanced Navigational Array is buyable equipment, available at any planet of Tech Level 7 or higher. Cost: 2250 ₢. This equipment is not supported in Oolite versions earlier than 1.67. 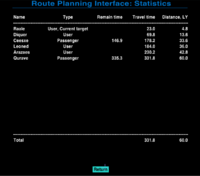