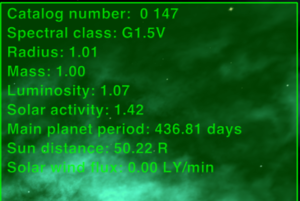 Advanced System Data MFD: Sun data
Solar wind flux currently reads as 0 due to occlusion from the nearby planet's magnetosphere

This OXP aims to make the suns in the solar systems more realistic. It also implements dynamic solar flares - and also a solar wind model allowing refueling with fuel scoops in space reasonably close to the sun (without needing to skim the sun)!

This project was initially inspired by Distant Suns (author Wildblood). The main reason to develop this alternative project was the rebalancing of the sun population and using the potential of more complex color spaces instead simple named colors for a more accurate simulation of solar spectra.

Another similar project is Distant Stars (author Rustem). It was presented later and had no such influence on my work with one exception (discussed later).

Let’s omit the long story of iterations such as “hot yellow suns for agricultural systems, red and orange dwarves for industrial ones” and outline the present state of project.

If you’ll inspect star population in Sun proximity (quite common region of Galaxy in terms of star population) and apply statistical data to Ooniverse, typical distribution of suns on regional map will be approximately:

And the rest of total 256 systems – 15...25 of brown dwarves (“failed” stars with mass too low to maintain ignition of thermonuclear synthesis in core). This is reality. Most of Galaxy star population belongs to low mass, relatively cold, dim red dwarves with extremely long life span. Well, now take statistical data for distribution of stars with confirmed exoplanets. This is rapidly expanding database and data for March 2015 are outdated, but tendency as whole remains actual. For Oolite 256 system map approximately:

Distribution of suns in Distant Suns reflects predominance of red dwarves in Galaxy:

Red dwarves are completely excluded from Rustem’s Ooniverse and remaining suns reflects above mentioned distribution of stars with exoplanets.

Sun Gear covers only four spectral classes, not six as in Distant Suns, but every spectral class is subdivided into spectral subclasses with unique color signatures. Spectral class G (yellow stars) for example is subdivided onto subclasses from G0 to G9. Moreover, every subclass is subdivided onto two steps with unique color too. Spectral subclass G2 for example is subdivided onto two steps – G2 and G2.5. This nomenclature is sometimes used in astronomy for more precise classification (star of spectral class G2.5 is a bit cooler than G2 but a bit hotter than G3). In total 28 spectral subclasses and 56 unique spectral signatures from F6 to M3. All suns in Sun Gear belongs to main sequence (luminosity class V), so you can see sun designations as G2V or K7V. Distribution of suns in Sun Gear is shifted to yellow suns of spectral class G – not for reasons based on real astronomy data, but for considerations of visual pleasure. Wildeblood’s Ooniverse with predominance of red suns seems a bit too biased to red. Nice for space battles, but I prefer more frequent yellow and white for illumination of planet textures. Color distribution of sun population for Sun Gear 4.3 for all eight sectors (total 2048 systems):

Hot B and A stars with bluish-white tint are completely excluded from my Ooniverse. It seems that life span of F5V star or hotter is too limited for planets with multicellular life and advanced biomes. Red dwarves cooler than M5V is another case: these suns has extremely long life span, but extremely violent solar flares too.

Since Sun Gear 4.0 I'm using RGB color space for sun colors instead HSB. In theory RGB colors based on real astrometric data can be simulated, but there are technical limitations in game, preventing such accurate simulation. Color of sun in Oolite is blended with 50% white, so you have no possibility to get saturated color. Moreover, real color space in Oolite is too restricted to simulate colors of real stars. M0V red dwarf, for example, has RGB color #ffcd90 or 255, 205, 144 in decimal notation, but you have no possibility to get value below 170 in any channel. Overriding this limitation needs some skill in redefining blending rules. So sun colors in Sun Gear enhanced to provide more visual diversity to game world.

In astronomy we usually know star magnitude and color. Well, star color and temperature are strongly correlated parameters (black body radiation approximation), so knowing star color you’ll know star temperature. For nearest stars you’ll also have distance measured directly with some error margins. Based on magnitude and distance you’ll calculate star luminosity. Based on star luminosity and temperature you’ll calculate star radius. In case of nearest binary stars with measurable orbital periods like Alpha Centauri you can estimate masses of components. In case of distant star you have only directly measured star magnitude and color, maybe sometimes distance with more wide error margins. You can estimate missing parameters based on known mean properties of stars of the same spectral class. This is how matters stand in real astronomy.

And this is how matters stand in Ooniverse: we have only sun radius in planetinfo.plist, not sun mass nor temperature per se. But we can estimate missing parameters based on known properties of stars of the same radius.

Just for historical reasons I am not using Sun analog as standard candle, but sun of spectral class G0V (temperature 6000 K).

This is simplified and slightly shifted data – you’ll see in astronomy handbooks temperature of M0V red dwarf color 3750 K, not 4000 K, and temperature of K0V orange dwarf 5240 K, not 5000 K. Sun Gear is not intended for generating publications in Astrophysical Journal. :-)

Search for logically motivated sun population distribution was maybe most informal part of project, and after experimenting I came to simple rule: Sun radius is proportional to main planet radius.

This project was started in epoch of Oolite 1.77, when sun_distance_modifier – parameter, measured in planet radius – was the only way to construct custom solar systems. Correlation between planet radius and sun radius is simplest way to generate population of systems with main planets near habitable zone – having large planet, you have large sun too, but more distant. All my systems has sun_distance_modifier in range from 450 to 700. Since Oolite 1.81 we have direct parameter sun_distance and above mentioned reason is obsolete. Sun Gear now using sun_distance parameter. But there are some reasons to maintain this rule “large planet – large sun”.

First, we have nav charts with large and small colored circles. Having large planets associated with large suns we have also cool sky chart with really looking color-coded stars! Just aesthetic reason, of course. But aesthetics is a vital component of good game. Second, function planet radius vs sun radius is a good reason to limit spectral class range to above mentioned values. Look, if your Earth twin (6400 km for simplicity) has sun with radius 960,000 km (15 planet radii in game units), small planet with radius 2800 km will have sun 420,000 km. This is M3V red dwarf in my scale. Again, planet radius 6900 km gives sun radius 1,035,000 km – this is F8V white star. Pure coincidence, honestly, but such fortunately! Third reason will be discussed a bit later.

Just one remark. I have another OXP – Habitable Main Planets (HMP). It redefines vanilla planet radii to more realistic values. Details are in relevant topic. Sun radii in Sun Gear are correlated with planet radii redefined in HMP, not in vanilla ones. It is not the case if you are using Sun Gear as pure ambience, but without HMP part of vanilla planet population vill be outside of habitable zones. So since Sun Gear 4.3 I decided to declare HMP as obligatory condition for Sun Gear.

A little more about habitable zones

Rustem’s Distant Stars has nice custom feature – dynamic solar flares. I borrowed this idea for Sun Gear (with my own realization of course).

Corona flare is controlled dynamically by script. Most of time sun of system is in quiet state (corona_flare random value in range 0.1…0.2), but sometimes solar flares occurs and corona_flare rises randomly up to 0.5 (yes, I know, in reality it is NOT linear correlation between solar corona size and solar flares!). As a rule flare frequency increases from yellow to red stars. Peculiar suns with "solar activity" in system description has more frequent flares with higher magnitudes (corona_flare rises up to 1.0 in case of "deadly solar activity").

Solar wind model is implemented. Solar wind allows to refuel ship without sunskimming (in some cases refuelling is possible en route from witchpoint to main planet). More detailed description of this feature will be found in the Hard Way OXP.

Magnetospheres of celestial bodies are simulated. Solar wind density is dropped to zero level near planets and moons. 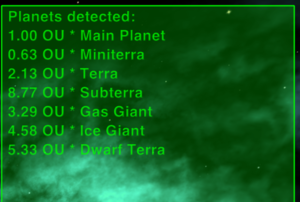 This provides list of additional planets in solar system. It displays only planet orbit radii in OU and planet class:

These data interfaces are only seen on landing and are generated by other oxp's in this suite. They are not MFDs and are accessed through the F4 screen.