After the unrivalled success of the Zero-Gravity Factories, many high Tech-Level Communist systems began collaborating in a project to advance this original scheme, to create a station that created original and unique technologies and devices, rather than simply copying systems already available from other companies. With this laudable aim, the Solar Laboratory and Production Unit was created with the aim of gathering together the cream of Communist scientific minds to design, create and advance the technological boundaries that currently restrict the rest of GalCop.

In every way, the SLAPU is as far removed from its predecessor as a Torus station is from a Coriolis. Where the Collective Factories were originally designed without artificial gravity, the SLAPU had specifically integrated graviton-field generation plates in every room and corridor, with highly accurate monitoring and adjustment functions that allowed a user to alter the gravity from zero to many hundreds of times the gravity of Lave. This function is highly focussed, allowing free movement and stress testing of the heaviest materials without affecting the station's structural integrity. A side-effect of this pin-point accuracy of gravitational field effects means that in the large outer bays of the station, massive objects can be lifted and moved around without any recourse to physical contact, either living or mechanical.

Another advancement from the Factories was the installation of high-efficiency solar panels and capacitance cells which did away with the highly volatile thermal power converters that had spelled doom for the Chernobol Factory and allowed a more direct and dependable source of energy to power the station's sectors.

The station itself is separated into four sectors, each one concerned with a different function. The first sector, Sector Green, is primarily concerned with power allocation from the capacitor cells to the other sectors, production of electronics and ship-board technologies and docking facilities for supply ships and other visiting vessels. The next sector, Sector Yellow, is allocated to bio-technological and bio-medical research and is the centre of the station's hydroponic food production. Sector Red is concerned with theoretical and experimental physics and Witchspace research. Sector Black's function is wholly taken up with propulsion technologies. 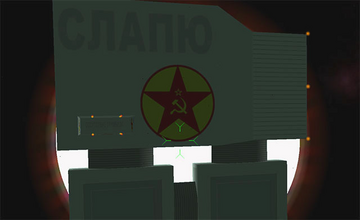 The Solar Laboratory and Production Units are the envy of almost every Corporate State and major electrical-technical company in the Galaxies, as the raw power of these Communist think-tanks produces novel means of overcoming the barriers that have held man-and-alienkind back for centuries. Since their inception, SLAPUs have been the subject of all means of corporate warfare, from espionage to outright physical attack with squadrons of paid mercenaries trying to destroy them. To this end, many SLAPUs are now equipped with enhanced shielding and concealed plasma defence turrets and, more often than not, they have their own squadrons of upgraded Military Rays permanently assigned to their protection. Aboard the stations, security is tight and every visitor and their vessel is subjected to a rigorous search before they are even allowed to exit the arrivals area in Sector Green. After this most visitors find they are only allowed within the environs of Sector Green. In the other sectors, the security troops most often will not hesitate to shoot intruders and, it is rumoured, any intruder caught after somehow managing to infiltrate Sector Black will be handed over the the Thought Police for interrogation and indoctrination before a lifetime sentence in the Astromines.

A great many rumours surround these facilities, some are obviously false, some simply Communist propaganda, but a few continue to pique the interest of outsiders and when mentioned in Communist systems tend to draw NeuroPol officers to the speaker like killer moths to a glow-lamp. These include:

This station is part of the Commies.oxp and is available here.