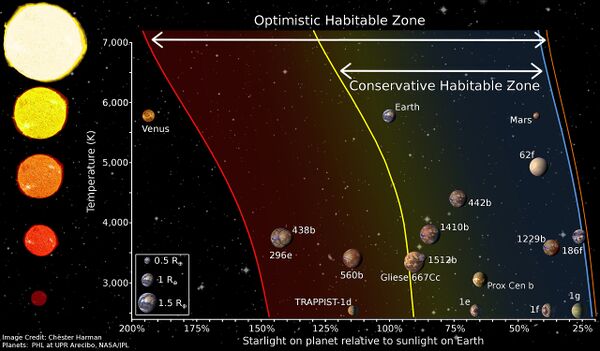 Can a planet with a radius of a pathetically tiny 3000 km possibly be an advanced agriculture world with a population of billions of residents? Definitely no way! Such a planet is far too small to maintain a dense and warm atmosphere. If it were located in the habitable zone of a solar system, then that small planet would have an extremely rarefied atmosphere with an atmospheric pressure of a few millibars - or less!

Habitable Main Planets was developed to adopt PlanetEngine, integrated with Planetary Systems from Strangers World, for the main planets of a solar system. PlanetEngine calculates atmospheric temperatures and pressures depending on the planet mass and the insolation/solar radiance level. But some of the vanilla game's main planets have unrealistically low radii to be able to be densely populated worlds. 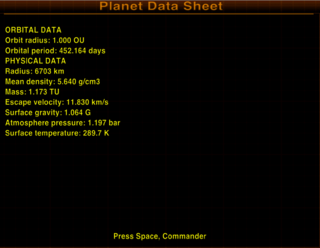 Unique Textures for every main planet

Habitable Main Planets provides a unique texture for every single main planet in the 2048 systems in the Eight Galaxies!

Habitable Main Planets OXP can be used per se as pure ambience, but it provides a more realistic background for the game's PlanetEngine. So Sun Gear and the Planetary System OXPs are recommended as well.

Unfortunately this readjusting did not completely eliminates conflicts with the vanilla Oolite descriptions such as The planet Atrare is cursed by vicious mountain monkeys (Atrare is a poor industrial planet with an insufficient radius of 3144 km). Procedural generation is so procedural :-)

Setting the minimal radius to 4250 km or above will partially solve the problem, but I prefer to allow more variation in the main planet physical conditions. If you plan terraforming missions for a planet with almost zero atmosphere pressure, it will be a rather poor target, won't it?

The distance between the witchpoint and the main planet in the vanilla game is a pseudo-random value in the range 10...14 times the main planet radius. Since Oolite 1.82 this distance has been defined as an absolute value – parameter planet_distance. Therefore increasing Lave's vanilla radius from 4116 km to 5821 km (for example) will only slightly affect the distance from the witchpoint to the main orbital station - and the corresponding travel time. The main orbital station is always positioned at a distance from the main planet surface equal to the main planet radius: so some OXPs using absolute coordinates for positioning additional objects will not function as intended after installing Habitable Main Planets (eg the Tionisla cemetery).

Improved visual appearance of all main planets is included with Habitable Main Planets since version 1.5. See my BB post of 25.10.2020 for more details.