This project was started as a tweaked version of Orbits. Good old Orbits (authors Ebi and Kaks‎) had textured planets and improved compatibility with large moons. Planetary Systems is a major modification of the original Orbits - but the original Orbits script, realizing the generation of the solar system and its orbital dynamics, remains as a crucial component of Planetary Systems. So let’s start our presentation from Orbits' script modifications.

The maximum additional number of planets in a system has been raised from 7 to 8.

These planets are divided onto classes based on radius:

It seems to be similar to our Solar system layout with exception of super-earth, but really Orbits generates wide range of possible layouts. You can see systems with only gas giants except main planet or with only terrestrial planets.

Discriminating borderline between large moon and small planet is raised from 1000 to 2500 km (from 10,000 to 25,000 m in game units). So you can simulate large moons such as Titan or Ganymede.

Original Orbits has fixed orbital period of main planet 300 days (standard year of canonic Lave). Modified script uses orbital period of main planet calculated on base of sun mass and distance (this part of work is provided by AstroLibrary external function in Sun Gear). So you’ll have not only unique planet layout for every system, you’ll have unique value of local year.

Like the original Orbits, Planetary Systems generates more compact systems than our real Solar system. Tionisla for example has almost all our planets except the Neptune analog, but with the following arrangement:


Planetary Systems like the original Orbits is not intended for simulation of elongated elliptical orbits, high inclination orbits, orbital resonances etc. All planets orbit in the same plane without any dynamic interaction. An extremely simplified model like that of a school astronomy handbook, of course.


It is possible to realize a technically more complex model by upgrading the code, but some crucial parts of the original code are too hard for me to clearly understand and to modify without risk of breaking it. So I focused on more obvious tasks.

Planet mass and chemical composition are two initial parameters, determining planet appearance. For moons and terrestrial planets you have such building materials as water ice (density 0.9), rock (density approx 2.5) and iron-nickel alloy (density approx 8.0). So for planets and moons composed mainly from these materials you’ll have mean density between these extreme values. In inner region of Solar system where solar irradiation is enough to sublimate volatiles you have mostly mix of rock and metal with only few volatiles and mean density of terrestrial planets are between 3.940 for Mars and 5.515 for Earth. In outer region of Solar system beyond frost line all three building materials are present so moons of gas and ice giants composed mainly from mix of water ice, rock and metal and mean density is from 0.98 (Tethys, composed mainly from water ice) to 3.53 (extremely dehydrated due to volcanic activity Io). There are also more exotic materials such as dry ice (solid carbon dioxide), nitrogen ice, water-ammonia brine, high pressure water ice modifications etc. But as rule of thumb: more distance from sun – less insolation – lower equilibrium temperature – less sublimation effects – more volatiles – lower mean density.


Situation with planet mass is more complex. Mean density of terrestrial planet depends not only from its bulk composition. More massive planet with same composition will be more dense due to gravitational compression. From a different standpoint, more massive planet in the same region of space can capture more volatiles, thus reducing mean density.

Having sufficient mass, planets can effectively capture hydrogen and helium from primordial nebula, so super-earth with critical mass above 10 Earth mass will develop extremely massive atmosphere and will transform onto ice giant or gas giant. Difference between ice giants like Uranus and Neptune and gas giants as Jupiter and Saturn lies mainly in their inner composition, not in their visual appearance. Uranus for example consists mainly from water, ammonia and methane ices (approx 9.3...13.5 Earth masses) and rocky core (0.5...3.7 Earth masses). Hydrogen and helium in Uranus atmosphere are only 0.5...1.5 Earth mass. Jupiter, for contrast, contains relatively small core – 12...45 Earth mass. Most of Jupiter’s 318 Earth mass consists from metallic, liquid and gaseous forms of hydrogen.


This is real astronomy. In Oolite we have no planet masses nor planet density simulated, so PlanetEngine deals with some retro-engineering: taking planet radius and planet density (calculated as function of insolation and radius) it calculates planet mass. There are really three functions for planet density in PlanetEngine: for terrestrial planet, for ice giants and for gas giants (in case of ice and gas planets located deeply outside frost line insolation is not taken into account, just planet radius). Having planet mass and radius, calculations of surface gravity and escape velocity are trivial tasks. Just one note. PlanetEngine uses planet with 6400 km radius as Earth analog for simplicity, not 6371 km real Earth mean radius (6378 km, mentioned in Sun Gear topic, is Earth equatorial radius), so calculated surface gravity and escape velocity will be slightly different from real values based on precise calculations using gravitational constant G.


Atmosphere parameters are less formalized data on project. Look on our Solar system. Extremely thin and cold Mars atmosphere (6 mbar pressure on “sea level”) is a present result of dissipation of more dense initial atmosphere. Extremely dense and hot Venus atmosphere (93 bar and 735 K on surface level) is a result of limestone degassing caused by runaway greenhouse effect. Extremely oxygen enriched Earth atmosphere (21% oxygen) is result of activity of life on planet. We have no (yet!) exact knowledge of initial atmosphere parameters for these planets nor accurate general model of atmosphere evolution during 4.6 billions years from formation of Solar System. So this part of PlanetEngine is a bit wild and, honestly, oversimplified speculation based on some assumptions.

That’s enough about the details of PlanetEngine's internal functions. How it will it be manifested in game?
If you have PlanetFall OXP (author Thargoid) or my PlanetLand (OXP with similar functionality, based on PlanetFall) installed, after docking with planet/moon surface port you’ll have access to new F4 screen Planet Data interface. It generates pages with slightly different output for planets and moons. 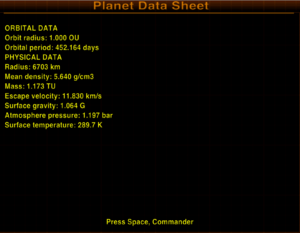 Accessed through the F4 page on landing

Output for the Moon Data Sheet is almost the same, but orbit radius is displayed in host planet radius units, not in OU.

There are two tricks in the case of super-earths, ice giants and gas giants.

Non-linear scale is implemented to large planets (super-earths, ice and gas giants). Being only 172,500 m radius in game really, largest gas giant is displayed in Planet Data Sheet page as gas giant of 72,500 km radius instead 17,250 km of default planet scale. Planet mass, escape velocity and surface gravity is displayed scaled too. This non-linear scale is used for display purposes only. Any calculation are based on internal scale. This is forced decision. Honest simulation of planet with 72,500 km radius (slightly more than Jupiter’s 71,500 km equatorial radius) will create too wide zone of mass-lock. Starting from surface port on Cobra Mk III, you’ll need 34.5 min on full throttle to leave mass-lock zone. Honest displaying of real 17,250 km radius of Jupiter analog will lead to too low mass of planet: having density 1.325 like real Jupiter its analog will have only 4.7 mass in Earth units, not real 318!

There is also bias in small planet parameters. Mercury and Pluto analogs in Planetary Systems are larger than prototypes. Initially it was implemented as simple way to avoid confusion between small planets and large moons.

There are two parameters, extremely important for a good sci-fi setting and completely missing in the PlanetEngine so far.

Typical value of rotation_speed parameter in planetinfo.plist included in game is between 0 and 0.005 radians/s. Having a rotation_speed of 0.0045 and a radius of 4116 km (the case of the vanilla Lave), you’ll have a rotation period only 23 min 16 s and linear rotation velocity on an equator of 18.5 km/s! Such a planet in reality will be ripped asunder by the centrifugal forces. Of course, this is a setting just for visual appearance. It seems a nice idea to give player opportunity to observe almost all the planet during the short trip from the witchpoint to the main station. But if you have PlanetFall and descend to low altitude, things seem to be wrong – the planet rotation looks too fast comparing with ship speed.

Setting rotation_speed to honest value 0.0001 or so (rotation period 17 hours 45 mins) will solve this problem, but at the cost of visual appearances – it is problematic to note subtle changes in planet details visibility during few minutes of flight. I have no idea how best to solve this conflict.

This parameter is crucial for climate modeling. But in Oolite planet orientation seems to work unpredictably – despite the same orientation declared for all additional planets in planetinfo.plist some of them are almost upright, some are lying on their sides. I have no idea how to fix it. Honestly.

Initially Planetary Systems has a predetermined set of textures for every planet class such as a Martian texture set for analogs of Mars, Venusian for analogs of Venus and so on. A Mercury analog orbit is always created between the sun and the orbit of the main planet, so it is safe to give Mercury analog texture of heavy cratered dry world such real Mercury or Moon. Terra-like planet in absence of Mercury analog will be be inside main planet orbit and looks like Venus, but if Mercury analog is present, Terra-like planet will be placed outside main planet orbit and looks like snowball Earth. Pluto analog is extreme case: in rare events of absence of other additional planets it occupies place of Mercury and looks like dry hot airless world, not icy cold airless one. These variations were implemented in next iteration of [b]Planetary Systems[/b].

Now textures for terrestrial planets selected using not planet positions per se but surface temperature and atmosphere pressure, calculated by PlanetEngine. So we have more possible variants in planet appearance: it may looks like Mars with polar ice caps or without ones, like cold windy rocky desert or hot sandy desert, like snowball Earth or volcanic world. I hope it will be fun to explore these variations.

There are five variants of every type of texture (60 in sum), selected for every system pseudo-randomly.

This OXP uses AstroLibrary functions in Sun Gear OXP to calculate properties of system planets and moons. So Sun Gear OXP is obligatory. Habitable Main Planets OXP is highly recommended to provide more reliable data for main planet. This is no way to match calculated atmosphere density and surface temperature for planet of 3000 km radius, for example, with vanilla game classification of such world as agricultural/tropical paradise. :-)

This is because Planetary Systems contains a tweaked copy of the Orbits script. Both OXZs will therefore instruct Oolite to move planets and moons to the positions each script has specified. As the two OXZs are telling Oolite to do different things, the completion conditions are never met. This can cause the game to become stuck in a loop until it runs out of memory and crashes.

To provide easy updating all planet textures have been repacked as separate texture packs.

The original planet textures were reprocessed. Reprocessing included converting the JPG file format into PNG, rescaling the image size to standard aspect for lat-long maps 2:1 with size 2 * 2^n width and 2^n height, using color saturation and lights/shadows level correction filters.
Texture size 4096x2048 was used as a compromise between file size and visual quality, but due to the shortage of high-res texture files, medium-res 2048x1024 textures were also used to complete the texture sets.

Stranger posted this on the Roolite forum in 2020 (English translation through Google Translate) in response to Another_commander's improvements to Oolite v.1.90 (Aug 2020).