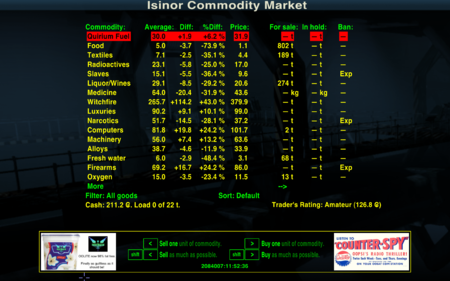 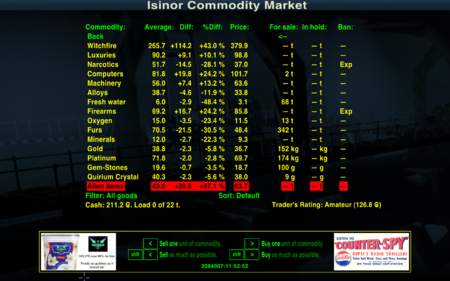 20 seconds later: prices of SW Economy commodities etc are not yet built into Phasted's oxp

Editor's Note: Why this OXP is so important

For me, one of the least satisfying elements of this game (going all the way back to the good ol' days playing Elite on my ancient Commodore 128) has always been the extremely unrealistic economic model. It's just laughable to think that one star system could have a commodity-price (for Computers, let's say...) of 101.2₢ per ton while another system just a short jump away sells the very same commodity for only 61.2₢ and that such a price disparity could persist indefinitely.

Suppose, for example, that Wal-Mart® were to set up shop right next door to Tiffany & Co.®, selling the exact same merchandise at substantially lower price. What do you think might happen to prices at Tiffany's? While there might be a small handful of snobs willing to pay higher prices for the Tiffany® name, enabling Tiffany's to cling to their existing prices, sooner or later, competition from Wal-Mart® would compel them to change their business model.

In Elite, the economic model is hard-coded into the game, beyond the reach of all but Mr. Bell and Mr. Braben. Oolite, however, thanks to Mr. Williams and Mr. Ayton (among others) allows any clumsy, talentless hack (like Yours Truly, for instance) to pop the hood and monkey around inside...

Every new player figures it out almost immediately: Computers are cheap and plentiful in Rich Industrial systems, and they can be sold for an enormous profit to the Poor and Agricultural. Liquor/Wines (and Furs, when they're available) are cheap in PoorAg systems and pricey on RichInd worlds.

"How brilliant of me to notice this!" The New Player might beam as he pats himself on the back. "I must be some kind of a genius! I'll just find a Rich Industrial/Poor Agricultural pair -- reasonably close to one another -- and make a killing hauling Computers one way and Liquor/Wines back... it's idiot-proof!"

As a result, traders most often head for RichInd and PoorAg worlds, robotically shuttling back and forth between them. There's no good reason to go to a PoorInd or RichAg system. The prices are "wrong."

Why the lazy-trader shuffle shouldn't work

What to do about it: Star Clusters and the Local Economic Balance

A star cluster is just what the name suggests... a group of stars arranged around a common center, called the hub. Every system in the Ooniverse is the hub of its own cluster. Any star within jump distance (7 light-years) of that system is a member of the cluster.

The unmodified economies are given a rating between -4 (rich industrial) and +4 (poor economical).

The EconBalance for any chosen system is then determined using a formula that takes a number of variables into account, including:

The local economic balance for a system will be detailed on its F7 page (data on "system") once that system has been arrived at. Again, the result ranges between industrial 4 through to agricultural 4. Just remember that industrial 4 is rich, while agricultural 4 is poor!

How this OXP works

While changes in quantities feed into changes in prices, the quantities do not seem to change other than when the player buys and sells.

Consequences for the player

Real-Life Economics will make it much more difficult to earn a living as a trader. You'll no longer be able to fill your hold with cargo and unload it for a huge profit at the system "next door." You may have to travel a long, long way to make a big score. You'll also find that, because movements in quantity are now directly (rather than inversely) related to changes in price, when prices are lowest, quantities available for sale will be pretty low, too.

Please note:   To make Phasted's oxp work you might need to edit it - see the Note below.

One can still make trading profits, but it is no longer as easy. Phasted's oxp does two things: it takes the obvious economic model behind Oolite trading and implements it properly. It also makes the terms Rich and Poor significant in terms of description of an economy.