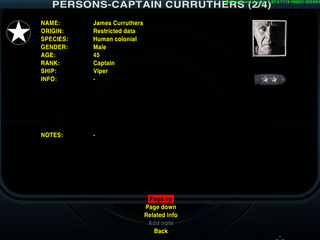 In Oolite, all characters other than you are NPC's. Unless you manage to connect with somebody else using Hiram's Nexus.

How do personalities exist within Oolite? Well, one either interacts with them when docked or as ships (in which case the AI of the ship is the relevant part - note that the AI's were rewritten for Oolite back in 2014 (v.1.80), breaking many AI's in older oxp's).

How NPC's react to you

The majority of randomness - with the JS AIs, anyway - is provided by the player role list. The player gets various roles (reputations, in intent) assigned to this list as they do stuff in the game, which then decay away again back to "player-unknown" (which is responded to roughly like the old "player" role was - pirates attack, everyone else ignores if Clean).

There is thus a local player reputation - which relates to local activities - and this is affected by one's elite rating.

The higher the player's Elite Rating, the slower their reputation decay is - some newish Mostly Harmless pilot you've never seen before could be anyone; some Deadly pilot you've never seen before you probably have at least vaguely heard the name and know what side they're on. Things which clear bounties - escape pods, galactic hyperspace - also clear out a good chunk of rep (though not all of it, especially not at Elite rank) ... normal jumping between systems clears down rep much faster if you're doing a cross-chart run than if you're hopping around the same A-B trade route for weeks.

Each AI then picks a random role from the list - so a player who does both trading and bounty hunting, some AIs will treat them as a trader, and some as a hunter, in rough proportion to how much they've done each activity lately. AIs in groups will take their lead from the group leader.

So, for example, a player who has been clobbering local pirates will gain a reputation for doing this, and other pirates will try and avoid that player. A player with a reputation as a pirate will on the other hand just be ignored.

This is also used by the police AIs if they stumble across a fight between two Clean ships: does the player have a better rep than the ship they're fighting? If so, it was probably the other one that started it, so they'll then start allocating bounties on that basis. (OXPs have a fair bit of flexibility to poke this so that the assassin pre-emptively attacking the player is the locally highly respected Earl of Tree Grubs, so clearly the scruffy outsider started it when the cops show up). Various other things like friendly fire forgiveness work in a similar way; traders are likely to run away from a "pirate" role player even if the player hasn't got anywhere near being hostile today; etc.

In general the idea is that your actions give you a reputation, AIs respond to that reputation, and escaping an established reputation can be done but takes some effort. (Cim 2022)

These OXP's introduce ships with NPC personalities into your game.
Many of these were crafted by Murgh
Note that some of these have been repackaged several times over the years - Missionaries, Boy Racer, Refugee Adder/Adder Xpat

These OXP's introduce (paid) allies into your game.

One of the issues is the Torus Drive which is not shared with NPC ships, and limits some interractions with them. See Torus Drive for workarounds

Many missions involve ships with personality. See Oolite Missions for a sortable list (you might wish to select your galaxy, for example).

Some of the Oolite players developed very characterful player versions: See Category:Profiles for an incomplete listing