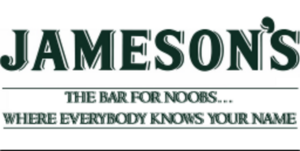 On delivery it is traditional for new Cobra command consoles to be set up with the default username Commander Jameson which is now universally recognized as slang for an inexperienced pilot. It is ironic that while Jameson is the slang for a newbie, the original Commander Jameson was the very first to be awarded the rank of "Elite".

Many new pilots have forgotten that when mooring a ship at a GalCop station they should alter the default filename used to manage the moorage facility to indicate who they themselves are, and thereby update their ships configuration. Experienced pilots sometimes hang around in the bars overlooking the admin section watching groups of young pilots trying to decide from the limited information provided which of the various Jamesons is them. In the worst cases, confusion of Jameson records has caused pilots to use incorrect or old ships, finding themselves stranded in the wrong place, on the wrong ship, with no idea how to recover. Although some of the old hands find this amusing, and offer small consolation in their advice to plan things better next time, it can cause serious frustration to inexperienced pilots, who just want to get in the ship as they left it and fly.

Of special amusement is the small group of experienced pilots from various humanoid systems who are actually named Jameson, and sometimes even have to adopt pseudonyms to avoid the embarrassment of declaring that Jameson is coming in to dock, or even worse to open communications with a Hognose Tugship, the commanders of which seem to live for the day they are hailed by Commander Jameson and will often tell the tale years later.

This is determined from Commander Jameson's life.

Elite is not given a date. Dates are published in The Space Traders Flight Training Manual, but for such things as the first production of the Cobra Mk III and not for the game itself. Due to Elite's Jameson being the grandfather of the player in Frontier, and the date in Frontier being set at 3200, Selezen calculated the date of the Classic Elite game as being 3125, and that of Oolite as 3147. See the discussion & links in Time.

Customising your Jameson in Oolite

Tales from the spacelanes...

This is my first post here, though I'm a veteran of the game. So grab a drink and gather round, I'm going to tell you about the first time I took a shot.

I was a peaceful Jameson back then, the pulse laser on the front of my Cobra 3 had never been fired in anger, guess I was just trying to raise enough creds to back bring back to Lave for the wife one day, buy a farm, raise some sprogs maybe.

Milk runs had taken me out to Onrira and I had a pretty good thing going, shuttling computers and food back and forth, back and forth. 100 credits had slowly become 200.

That life changed on my fourth run to Onrira, when I got jumped by an Asp near witchpoint. He was carving me up, I didn't stand a chance. Couldn't outrun him, couldn't hit him, shields were gone, when I saw the message that 2 tons of computers had been destroyed. Man, that was all the profit I'd ever made, gone. I never hit him once. I'm still here though! A cop showed up in the nick of time, saved my sorry soul and no mistake.

Not that I cared much - no cash, nothing much to live for now.

But that wasn't the biggest thing to happen to me that day. Halfway to the planet, the jump drive slammed shut and I rubbed my eyes to see I was mass locked by, I don't know, 15 or 20 ships all over the radar. Yellows, reds, purples. Flashing... Aliens? Yep, aliens. That asp should've killed me, now I'm going to die at the hands of filthy aliens.

If those computers hadn't blown out, I would've tried to skirt round the action unnoticed, but instead I found myself heading slowly into the action, and soon got my first glimpse of the navy in action, and my first sight if a Tharg.

Real close-by they were, trading blows, and there I was. Right there, watching. I targeted an alien, and almost froze as it swept right by me. As it passed, I squeezed the trigger for the first time in my life.

Is the first shot from a virgin laser the hardest shot it ever fires? Is it blessed by the gods, or maybe just lucky? All I know, is that Thargoid blew up. To be honest I thought it was me that had blown, the shock was that great. But no, I'd got my first kill, and it was a Thargoid! I didn't see the bounty message, didn't give it any thought, because soon something else happened that set me up for life. The navy turned their attention to more Thargs, two more I think, at least 10km away, and I was in my own. Just me. And a dozen little alien baby craft, spinning, missing their mother. What would you do?

Well, I shot em. And when the navy had polished off the rest of the mother craft, I found more of the little pups, and I shot them too. Bounty for nothing, a turkey shoot.

It wasn't heroic and it certainly wasn't skilful, but lady luck had smiled on me, bought me a drink, and handed me her number.

I arrived at Onrira a different man, no computers in the hold, but 500 credits in the bank. More than twice what I'd had before.

And I never looked back. I never did go back to Lave. So if you see my wife tell her her husband died at at Onrira, and in his place a lucky man was born. Zigson (2011)