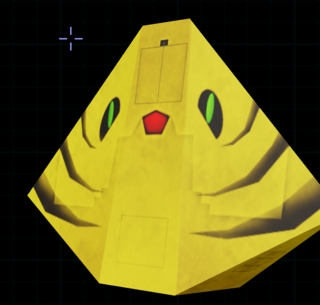 This Oolite expansion pack adds a collection of classic Elite ships with custom paint jobs. Includes also a large number of custom and standard racing vehicles, gang warfare and an anarchic gang of pirates with tiger stripes that somehow don't like the player.

There are ships from the Bloods, Jjaggeds & Grims gangs, but they do not yet operate as "gangs" in the way that the Tigers do.

This OXP requires version 1.65 of Oolite for the extra ships, or version 1.75+ for the scripted encounters.

- converted plists to openstep.
- scripts and descriptions entries given less generic names.
- discovered a couple of bugs, and updated js to Oolite v1.75+.

- better aligned textures for some of the racers
- corrected another texture / name mismatch
- made js script more compatible with 1.71 (as yet unreleased)

- bug inside abs2pwm corrected (function would not work correctly if witchpoint buoy was destroyed!)
- minor change to 'reinforcements' code.
- (added in 0.50) ships compatible with oolite 1.65 & will appear as pirates throughout the systems.(added in 0.50)

- added demoships.plist
- updated textures and names to match their ships.
- updated the script to make it a bit more challenging.
- includes abs2pwm function, for better ships placement in Oolite 1.70.

Add the Hotrods gang and get the player in the middle of a gang feud between the two.
The Hotrods - the Tigers fiercest rivals.
Storyline!

Cleanup of all the models inside CP&R & CPJ, about 30 ships between models and paint jobs, including 4 types of tiger ships and 12 '50s racetrack style adders. The internal names of the ships were kept the same, to update older, buggier models with these more recent ones. 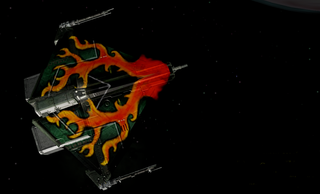 -No dependencies (unintended or otherwise) on other OXP's.
-Is written in legacy (pre-Javascript) style.
-graphic material and models based on G.Williams' redux set.
-several new models and associated textures designed by me, the author.
-a small test script.plist, that sets up an ambush for the player. This file is for exposition purposes only, take this out as soon as possible. Later versions will include a more involved script.

Note should be made that cbr has come up with some new textures for Hotrods (see opposite!)

Gang warfare info: After the player's kills score gets to 30, the gang warfare begins.

At the moment there's only one gang: the tiger gang, and it doesn't like the player. The tiger gang should show itself in numbers in about a third of the systems. They'll have a go at the player the next 5-10 times the player encounters them, then things will quiet down again. (but for how long?)

Individual tiger gang members can also - occasionally - be spotted just about anywhere, but they're not especially singling out the player. Keep this expansion in the AddOns folder to add variety to the Ooniverse.

The author is extremely prone to type, syntax, copy-paste, and other programming errors. My excuses in advance should you encounter the inevitable (non-thargoid) bugs. Please communicate these to me via the boards (http://aegidian.org/bb/index.php)

Notes on license from ReadMe:

Tougher - and the gang does not just hang out purely in the anarchies either... they travel! A good oxp.