Build up your escort fleet and hold on an external deck attached to your ship.

First you must buy Escort Deck equipment then you will see an attached platform in your aft view. 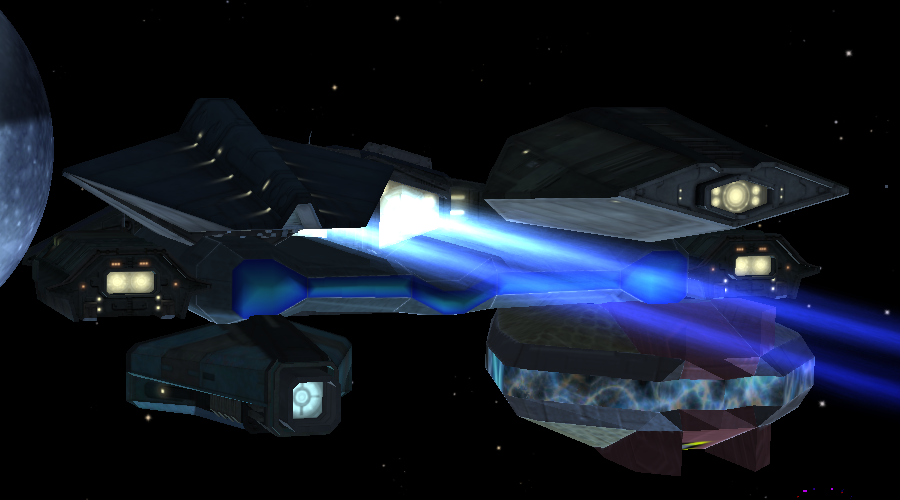 If your ship is over 130t mass like Cobra Mark III then can hold another two small ships like Adders (max. 15m height, 39m width and 65m length) on the sides of the deck.

The mass of your escort must be less than 40% of your ship's mass. For example an Asp (75t) can hold 4 small escorts below 30t: Adder, Gecko or Sidewinder. You should use a ship over 40t mass to be able to use Adders (16t) as escorts. Ships below 30t mass can not get Escort Deck.

Beware of replacing your large ship to a smaller one, all of your escorts will be salvaged which isn't fit into the smaller limits.

Ships over 260t like Python receive wider deck variant to hold escorts up to 95m width like Krait or Tiger Ray. 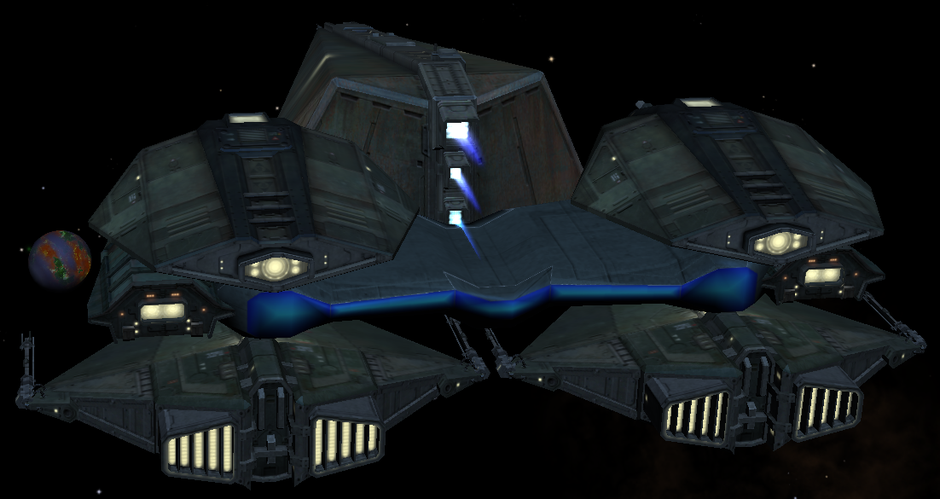 You can buy escorts in the ship outfitting (F3) screen. These are not available in the local shipyard but ordered from a remote owner so your time will forwarding a lot if you buy one, but in this way you can buy advanced ships in the low tech worlds also.

There are very good pirate escort ships (more if you install EscortPack) but these are not purchaseable in main stations: you must force to eject the pilot or find in the outfitting list in alternative stations.

There are rumors about ace sniper pilots in pirate stations with better ships than an Asp, but these surely costs more than 1MCr if you want to hire them into your escort fleet.

You can pick up derelict ships: put your target lock on, go nearer than 500m and with less than 100m/s speed difference. If you can not target it (due to the target has jamming device) then you can collide very slowly to trigger the pickup.

If an "usable" message shown in your console when target a derelict ship (Combat MFD show it also) then you can use this ship as your escort, else transfer it to a dock on your deck and you will get some money for the salvage.

If you have Towbar OXP then you will get reputation also for the delivered salvage. 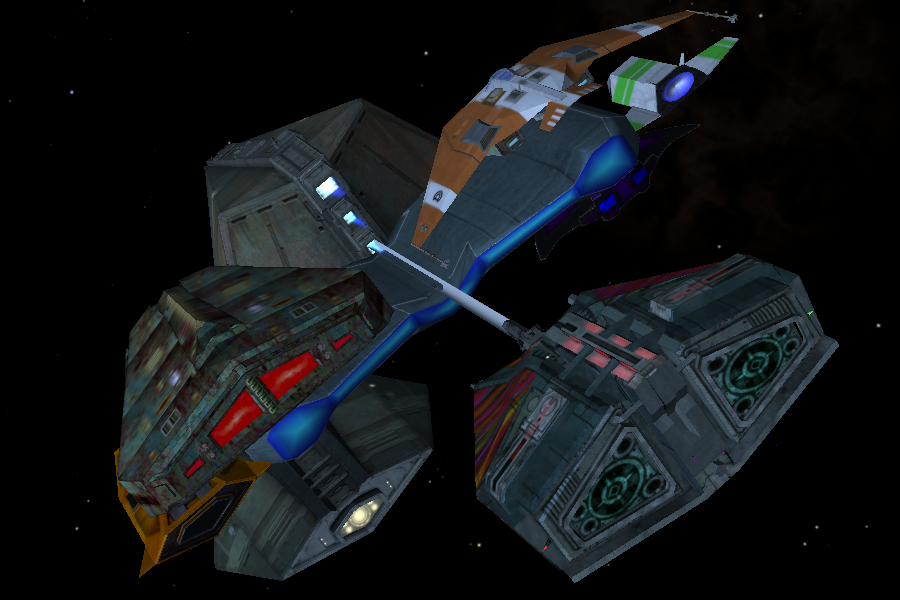 There are heavy escorts around 120t mass, these are multipurpose ships modified for escort jobs which mean removed cargo capacity and some bonuses (please install EscortPack OXP to get these).

You can prime Escort Deck with Shift+N then activate with "n" key to launch or call back your escorts. The mode key "b" select a single escort for launch or callback. There is an auto launch if you enter into red alert and auto callback when changed to green.

You can prevent the launch of any ship if you select it by the mode key then activate once only: the first press will change the status to "LOCKED". The second activate will remove the lock and launch it, but you can call back instantly with a third keypress if you want to stay on the deck without the lock.

There is an auto launch if you enter into red alert and auto callback when changed to green.

There is a Multi-Function Display of Escort Deck, you can turn it on using the ":" and ";" keys. 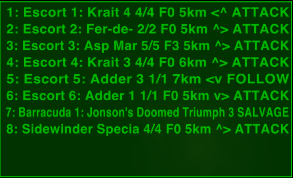 This show the list of current escorts, a "->" mark before the selected one, name, energy, fuel (if this escort has working Injectors), distance, bearing (^> mean up left) and activity:

You can pick up a new escort even if there is no more free landing pads listed on your MFD if you select a pad and maintain a target lock on the new ship when try to land or an escort is not in your deck. In these cases the old one will be replaced and you will find it bit farther behind your ship.

The released escort will follow you (if it is not derelict) while you stay within the same system and don't take a rest (reload the game), but will not defend you by itself. So you can pick up a derelict ship by replacing one of your escorts, transfer it into a station for payment, then leave the station and relock your old escort to the deck.

If you dock or enter into a wormhole while some of your escorts are not in your deck then those that is within your scanner range will be docked also. Others can be lost, especially if travelled far from you.

If you want to exchange the positions of two escorts on your deck then do these in order:

The MFD can show the ship on Towbar in the last line, maked as T: . You can release the towed ship by selecting and activating it in this MFD. If no ship on your Towbar then show the maximal mass which your ship can tow (1.6 times of the mass of your ship).

Your escorts will be refuelled when you buy fuel for your ship.

If your ship is over 400t like an Anaconda then you can buy XL deck instead of the common deck can hold 8 escorts behind you, but the mass limit is lower: max. 60t, so you can't use Asp and heavy escort ships.

If you have Towbar then you can't pick up any ship there due to the long XL deck occupy the same space behind you. The simple escort deck is shorter and Towbar compatible so if you plan to salvage larger ships than small escorts then you should choose the normal deck.

Warning: your ship can be "uber" if you use 8 escorts, so if you want limit yoursef then stick with the smaller deck and avoid the XL variant.

Carriers can hold 10 escorts on the internal XL deck (the "neck") and the mass limit is 130t as in the normal deck. Moreover the first two pads (on the top) can hold wider and heavier ships up to 378t (40% of Carriers' mass) and 130x35x95m including Cobra Mark III, Krait and other large ships also. This is even more "uber" but intentionally: a Carrier should be able to hold stronger fleet than others.

In F4 screen you can view, rename and salvage your current escorts. Moreover if Hyperspace Hangar is installed then you can buy esorts from the main shipyard (F3F3) using the following steps:

The hangar is usable as a temporary storage to rearrange your escorts as well as fix damaged equipments or buy new ones, just store your main ship into the hangar:

If you acquired an OXP escort ship which is not designed for player then you can not switch into. 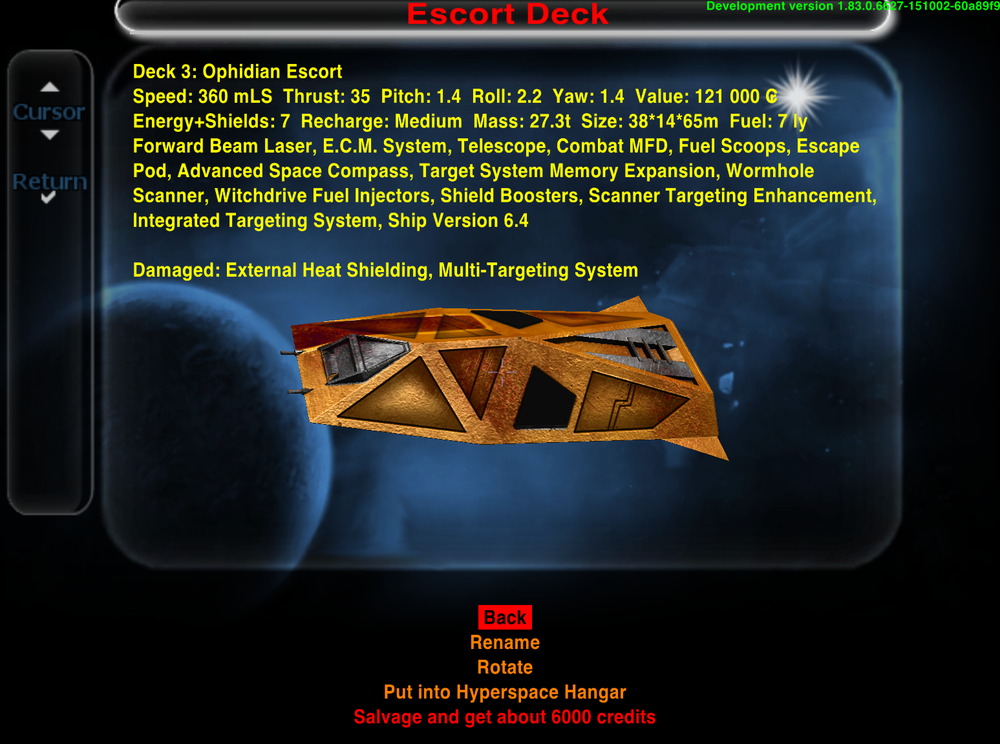 You can upgrade the whole escort if you buy another ship in shipyard (F3F3) while you are switched into an escort. The old ship will be counted into the cost of the new one, regardless of you found (or just forced to eject) in the deep space.

The trade-in value (75% of ship price) is displayed in the interface (see the top left corner in the screenshot above) due to this reason. But you are not able to sell an escort and get this big money directly (to keep up some balance).

You will get one of the following variants depending on the mass of your ship. 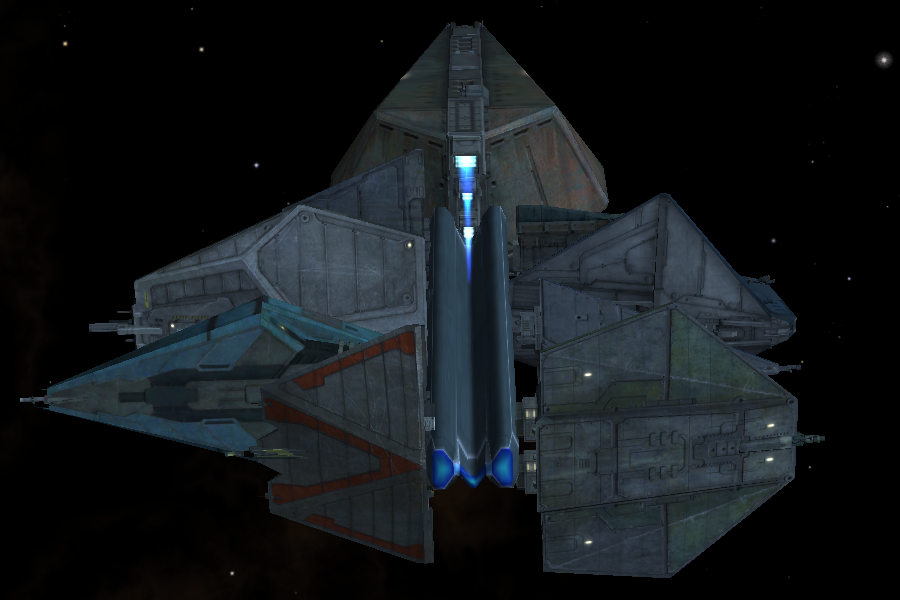 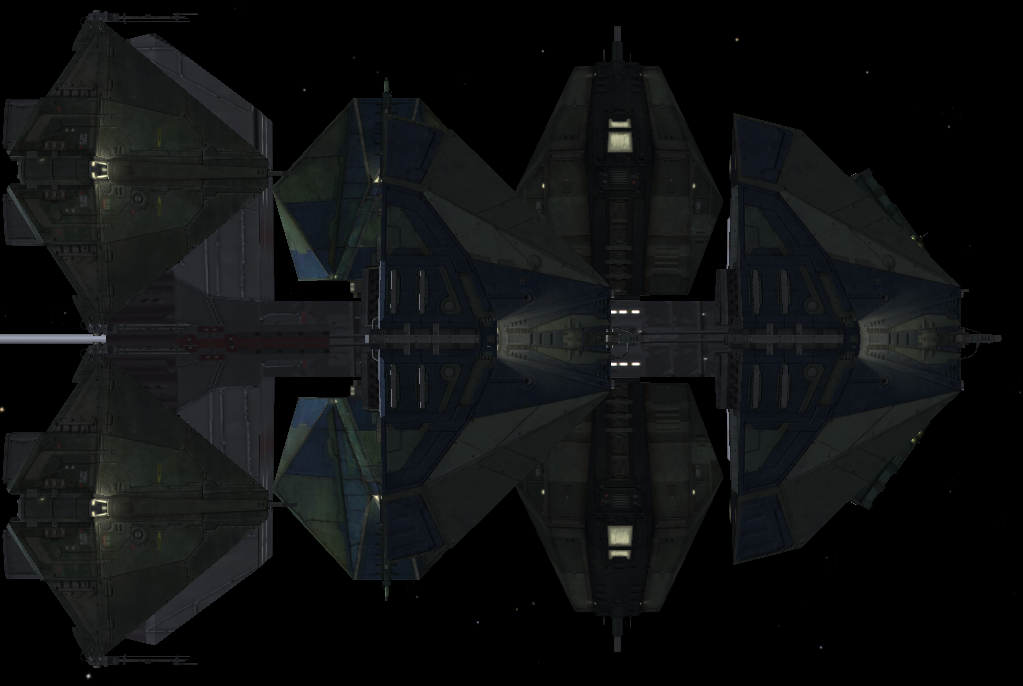 For more information see the regarding discussuion. 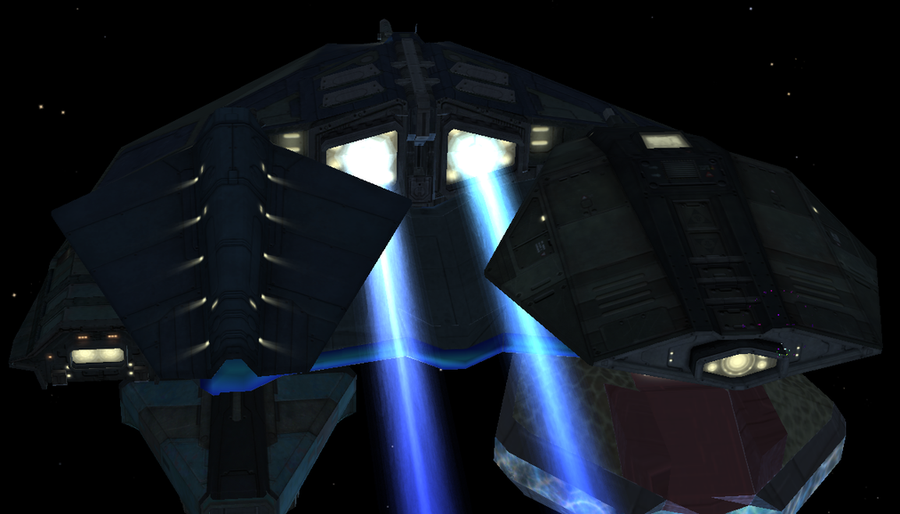 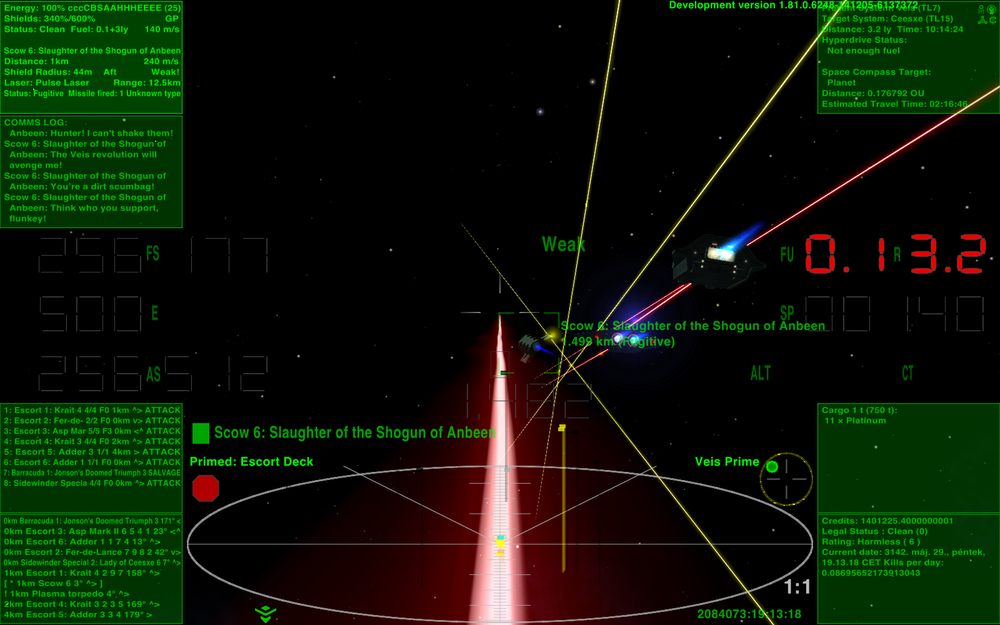 The 3D models of decks are derived from Leviathan Platform in Aquatics OXP, thanks to Thargoid and P.A. Groove.

Escort locked sound is equal with Towbar locked which is based on bgs-m_fx_shipyard1.ogg in BGS OXP.