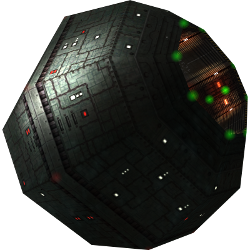 Lasers are the most common kind of combat equipment. There are four kinds of laser - pulse, beam, military and mining. Although mining lasers pack a powerful punch, their cycle time is too slow for combat use and so will not be discussed here.

The different kinds of combat laser

The Pulse Laser is the cheapest and most basic kind of combat laser; they are really only any good for ships that never go to dangerous systems. They are just about powerful enough to discourage opportunists from robbing you of your cargo, but that's about it. They have a very slow cycle time which only compounds the problems of being low powered. Pulse lasers have a maximum range of 12,500 metres. The only advantage of pulse lasers is they don't heat up very quickly, so you can almost fire them all the time without worrying about heat build up.

For a serious combateer or a trader who visits more dangerous worlds, the Beam Laser is more appropriate. This laser is not much more powerful than the pulse laser, but instead of firing in short pulses followed by a long quench time, the beam laser fires in a continuous beam as its name suggests. Beam lasers have a maximum range of 15,000 metres. The weapon itself is made up of 150 laser tubes which are fired together. A power pack augments the ship's power and keeps a continuous flow of high wattage current running to the laser tubes so there is no risk of fade out when other demands are made on a ship's main power unit. They do generate more heat, and when a certain limit is reached must be allowed to cool. The thermal cut-out is automatic, and will degrade the weapon to 'pulse' mode when thermal limits are reached so the weapon is still of some use when hot.

The Military Laser, despite the marketing hype, is nothing more than a beam laser with additional laser tubes. Consequently, its wattage is much higher - and so is its propensity to overheat. Like the beam laser, the thermal cut-out degrades firing mode gracefully to pulse mode when the weapon nears thermal limits. Military lasers have a maximum range of 30,000 metres. The military laser will destroy small ships like the Adder in less than two seconds - small ships have very little defence against a ship wielding this powerful weapon.

Lasers are extremely simple to use - line your target up in the targeting box, and fire. However, to be effective you need finesse. Follow this advice to get the most out of your laser, regardless of type:

There are two OXPs which help with aiming the rear laser at targets.

Moreover if your ship is not stopped then even a stationary target will always move sideways from your crosshairs due to your ship moving forwards: which looks like sideways movement in the side views, so you must constantly roll and pitch again.

Try practicing the side aim during movement on the navigation buoy first (but don't shoot unless you want a criminal record!). Asteroids make good practice targets.

Note that this is one of the player advantages over NPCs in the Vanilla game: you get extra speed, the Torus Drive, separate fore and aft shields, yaw, and side lasers. They get none of this, unless you add oxps which even out the balance (see Cheating for a list of these).

If you dislike the "roll" in side views then use the yaw controls ("," and "." keys) instead of the roll controls. See Roll vs Yaw crusades for more details on changing yaw & roll.

Combat in real life is different from any other simulation environments (especially games like First-Person-Shooters.) Simply put, you start out gunned by ships that are faster, more agile and better armed. To survive combat in this situation, you have to out-think your opponent. The only real way is to develop the mindset is to practice (and be willing to spend a lot of time running and/or being clobbered.) To get you going, here are few basic fighting techniques that should get you in the heady combat ranks of Average.

Most Harmless commander when they get in to their first fight, will charge head first at the target; then wonder why they get obliterated on the first fly past. Sometimes the other ship will not be able to pull away in time or pulls away in the same direction so both ship will be destroyed in the collision. Even if both ships miss each other the narrowest of margins they scrape shields or hulls and still end up wrecks. Until you truly mastered the ship, by doing a few hundred manual docking, you will not be able to judge distances and speed accurately, so it better to give ships a wide berth.

When A Ship Is On Your Tail

After a few fights, you may have noticed that some of the ships will use some unusual flight styles. These manoeuvers are both useful in bringing your ship into attack position and taking it out of another ship’s fire line. It is worthwhile practicing these manoeuvers in the safety of the station aegis till you become accustom to them. The manoeuver names listed here are the GCW Flight Academies' standardised terms for them. Individual races may used alternative name inspired by beings or creatures of their native environments.

Maintain your speed and roll your ship in a clockwise or anticlockwise direction. Unless the attacker is extremely close or absolutely on centre of your tail, the majority of their shots will miss your hull.

At maximum speed pull a series of tight dives and climbs. From side on viewpoint, the ship will appear to trace a sine wave. This manoeuver should keep you out of the attackers firing zone as much as possible while maintaining some forward movement.

At maximum speed pull a maximum pitch or yaw turn. This will put your ship in a tight loop bringing you behind your attacker. This manoeuver is best performed with the opponent close behind you, as it relies on them being unable to alter their flightpath in time.

This is considered to be a more dangerous manoeuver as it involves allowing the attacker to catching up with you. Drop your speed 85-90% so that the attacker closes within 500 metres. Now alter your pitch or yaw by at least 90° and maximise your speed. With luck, your opponent will over-shoot you allowing you valuable moment to either bring your laser on target or to put distance between you. By pulling a 180° turn, you will now be flying in the opposite direction allowing for an easier escape, or to target the opponent with your missiles or rear mounted laser.

The majority of ships out there only ever carry a forward mounted laser. This leaves every other direction unguarded. In the beginning most criminals will fly a series of strafing runs in the hope of an easy kill. If you damage them enough, they will cut their losses and run. Now chase after them and attack their undefended rear. It may not be cool or honourable, but you will live, they won’t and that’s what matters.

Someone Launched A Missile

When an opponent has launched a missile at you and you don’t have a ECM System, you have only two options. One, launch a Missile at the missile or at them in the hope that they have to ECM yours and take out theirs in the process. Two, run as fast as you can and give your ship enough time to recharge enough of the energy banks/shields to take the hit, or that it has to trail you for so long that it runs out of fuel and self-destructs. Witch Fuel Injectors really help here. When you want to make your own missile count, try to close in as close as possible to the target before launching, reducing their chance of being able ECM it in time.
There is a third option: shoot down the missile. You have very little time to do it and you will have to be a very sharp shooter, but it's a possibility and the combat console helps the pilot here by offering the target-nearest-incoming-missile control (T targets nearest incoming missile), which bypasses the entire process of having to center the target before it is registered. It was implemented for offering the incoming missile as target for turrets, for the ships that have turrets, but it can be useful also for immediately letting the pilot know where the incoming missile is and maybe giving a couple more extra critical seconds to react. If you do do this, if the missile is performing a spiralling vortex, don't try to follow it with your gunsight - let it come to you.

Only heroes/idiots stay and fight to the death. If you are out-classed, just turn tail and run. Most pirates have limited window of opportunities between police patrols and can’t afford to waste time. If you keep running long enough, they give up and their IFF System flags will go yellow. Another advantage of this that if you are in the stable systems it shouldn’t be long before you run in to a local Government or GalCop patrol. They will come to your aid if you are attacked (and legally clean enough.) If you run long enough, you will end up at the GCW station aegis, and any violence there will prompt a very aggressive response from the stations’ Viper fleet.

Use distractions to cover your retreat. Hitting d on your keyboard will trigger the dumping one cargo canister from the front of the Cobra. This is often enough to distract a pirate for long enough for you get out of scanner range and to be able to activate hyperspeed. By default the computer will dump the first item in the cargo manifest, using Shift-R will rotate through the manifest to for the cargo type to be dumped. It’s often worth carrying one ton of low value goods like food or minerals and rotating through the manifest to select it as soon as you exit witchspace.

The Manfred Manoeuver above only works for Oolite, not 8-bit Elite. Sorry!

This is pretty jolly useless for the Newtonian combat of FE2/FFE! Read here instead. Or watch this.

The smaller the ship, the more often the attacking NPC's miss it. The Cobra Mk.3 is much larger than an Adder.

Tips from an old, bold pilot - and there ain't many of them

If you can't hit your targets consistently with a Beam Laser, you'll probably be worse off with a Military Laser. You can't afford to fire a Military Laser into deep space. Finish your training at Lave before setting off and make your old Pa proud.
Get good with the Beam Laser before upgrading. And although I intend to leave you a tidy sum, don't do the dumb-rich-kid mistake of putting a Military Laser in a small ship. The power you need for shield regeneration will be running the laser and you've got to remember your target's pals are going to be shooting at you too.
Rear lasers are not an option. When you're running to save your skin - and you will some day - you'll be glad of scaring off or even taking out one of that gang of pirates that's chasing you. You won't do that unless you've learned how to aim and fire using the rear laser. There's no shame in running away, boy. No shame at all.
Believe it not, you too can shoot and destroy missiles, with practice. I've even seen these cute blue slimy frogs shoot the tail-fins off a hard-head - that's an ECM Hardened Missile to you son.

Found in a pile of notes marked "Advice to send young Timmy" in a burned-out Fer-de-Lance drifting off Ceenbion.

A range of OXPs which assist with laser combat/dogfighting can be found through the pages linked to Oolite Equipment. Or see: