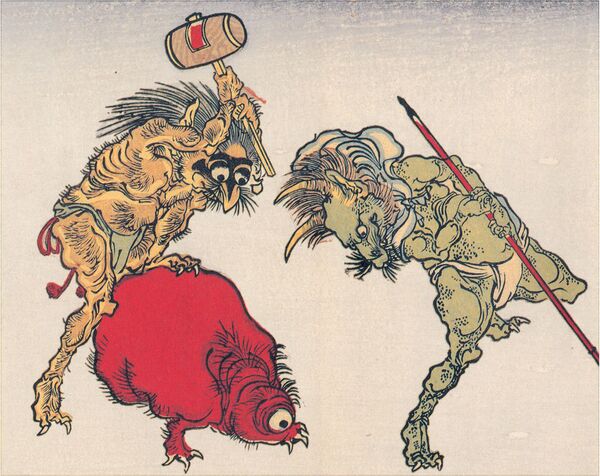 The Hounding of Ebortsa, provenance unknown: painting in the nave of the Grand Cathedral of Digebiti
Note the alternating hues of the demonic loincloths, a matter of profound analysis in the renowned treatise on Theological Arithmetics by Saint Phibo Nacci, the famed Tibecean Sacerdote

Ebortsa is now a minor daemon in the demonology of the Church of Giles the Creator. Once a major daemon, head of a large cohort of his fellows, he failed dismally to prevent the Holy Jens, Vicar of The Eight, Co-ordinator of the Celestial Codes of Creation from attaining the beatific state of Maximal Occultation. On being mobbed by his confederates, he was demoted to his current inferior status.

The Anniversary of the Auspicious Achievement celebrates the enhancement of the Holy Jens at the same time as it rejoices in the denigration of Ebortsa. In some systems such as Digebiti it is a major festival celebrated with domino-wearing, the playing of bassinets and the performances of maurice-dancers, who emulate the demon cohorts in their hounding of Ebortsa. The role of Ebortsa is usually given to a serf who is created a freeman on the conclusion of the festivities.

On Tionisla, Ebortsa is worshipped as the goddess of nomads.

Downloadable through the in-game Expansions Manager