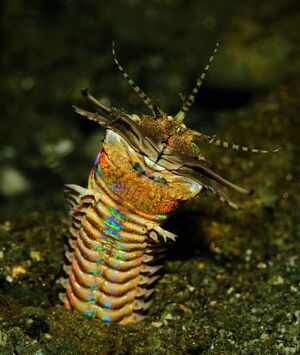 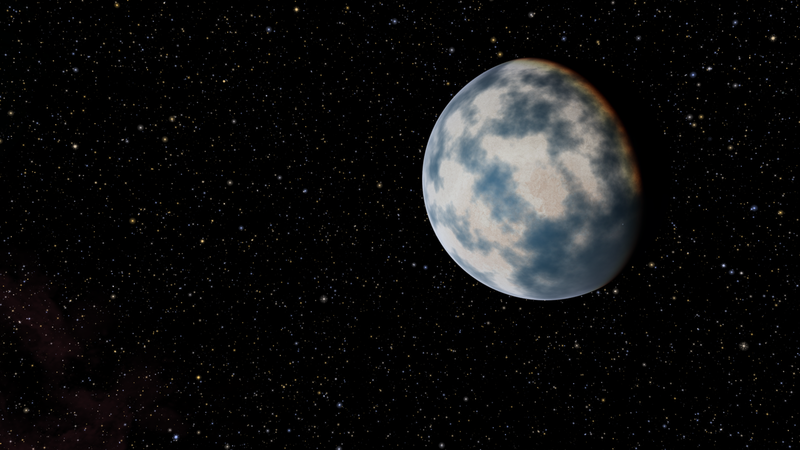 Digebiti (PovrayPlanets OXP) taken by Sir Cody of El Viejo, Officer of the Order of the Opulent Ooniverse

Digebiti is a member of The Royal Houses of Santaari. The nobility of Digebiti is of English descent. (Feudal States OXP).

The knight on the charger is, of course, Sir Ffoliot Frederick Cary, the Right Honourable Viscount Falkland, the golden hues emphasising his nobility and honour (see below for his importance in the settling of the planet). The "true blue" background represents his loyalty to his feal vassals.

A Digebitian variant of BroadcastComms MFD now exists. Downloadable through the in-game Expansions Manager in the HUDs section (BroadcastComms Digebiti Variations). For those in search of a more genteel mode of expression.

This system falls under the responsibility of the Navy Command Station 5 in Encereso. (Galactic Navy OXP)

Digebiti can be pronounced either Dih-djee-bih-tee or Die-djih-bih-tee depending on where on the planet one hails from.

The Supreme Ruler of Digebiti, Prince-Elector Rupert XIX of the House of Lancaster, reigns over the system from the Cocktail Throne in the capital, Lesser Walsingham. He took the throne after the death of his older brother, Desmond, the then heir, during a game of Real Tennis. This unhappy event led to Rupert's eschewal of Tennis for Extreme Dominoes. He is understood to be much concerned with the constant diplomatic friction between Digebiti and Inonri (and their compatriots in Vetitice) to the north. There are many worries about possible Inonrian agents working to undermine the political system here in Digebiti, fomenting instability and disloyalty.

Real Tennis had been brought to Digebiti by the Right Honourable Viscount Falkland's Generation ship which uniquely contained two Real Tennis Courts. Attempts to export Real Tennis equipment (the hand-crafted balls wrapped in tempered Seoid-skin, the angulated racquets) have been hampered by the lack of interest in other systems (possibly due to the extreme convolution of the rules and the vast expense involved in building Real Tennis courts: the colonnades and their roofing, the trenches, the golden bells...). The most prestigious court is that in the Cathedral in Greater Walsingham, lovingly instated there in the cloisters directly from Falkland's ship itself. Some local wags aver that the cathedral was built specially to house the tennis court. It is interesting to note that the usage of the building has indeed changed over the millennia: it was originally dedicated to quite a different church (the autocephalous Scottish Catholic Church which split from Roman Catholicism over the Pope's failure to embrace Jacobitism: it is still influential in the Tews & the Falkland demesne (the "Latin country"), just to the west of the Dismal Desert).

Other failed exports include the silk top hat, the tricorn and the pith helmet. Whilst hat-wearing is all the rage on Digebiti itself, and hats are worn by gentlemen of all ranks and none (not to mention the ladies), the particular fashions currently in vogue have proved of little interest to the sartorially inclined in other systems. There was a run on tricorns on some of the lobstoid worlds, but when the House of Lords came to understand that they were being used as knee-protectors, the trade was interdicted in a flurry of disgust and disbelief.

The most dignified of the Orders of Chivalry, and Digebiti's highest ranking honour, is the Order of the Opulent Ooniverse. Admissions to the Order are few - it is limited to a mere dozen Grand Commanders (mostly Royals), a half-dozen Knight Commanders, 13 Knights, 248 Officers and 613 Members. The rank of Knight Commander has traditionally been reserved for the five Marcher Lords whose lands border the mountains and who must fend off the depredations of the Killer Mountain Seoids. The occasional vanquishers of Seoids in combat may also merit this honour.

Mention must be made at this point of the House of Lords itself. Built in revival gothic style, the edifice is mostly constructed of a deep blue marble extracted from the mountain ranges north of Greater Walsingham. The golden veins running through the stone yield a scintillating shimmer at dawn, when the sun rises over the horizon and first strikes the facade. A popular sight for the tourists. Several hoteliers have redeveloped some of the local buildings to enable their patrons to witness this from their terraces. The tower of the Holy Jens contains the bells which mark the parliamentary divisions. Each marks a particular event: one for example is sounded only at the death of the Supreme Ruler, another at the elimination of a Seoid. The major political parties are the Adullamites, the Liberal Conservatives and the Conservative Liberals. These espouse a number of political positions along the Tory-Whig political spectrum.

The University of Old Salisbury is renowned for the long-standing debate between the department of the History of the Philosophy of History and the department for the Philosophy of the History of Philosophy - the growing heat of the debate (concerning the relationship between time, space & thought) has led to several duels over the past century, usually in hot-air balloons and featuring the famous duelling pistols (rather than the blunderbusses which were used in antiquity). These heated debates pass by the subjects of the Supreme Ruler who are much more concerned with the rival claims of Afternoon Tea and High Tea to cultural supremacy. Afternoon Tea is preferred in the capital and to the west, High Tea in the orient. Tiffin has been making inroads in the Tews. It is usually best to avoid the subject if one finds oneself in polite company. No such debates exist regarding the crucial importance of Elevenses.

Tea dances are a very popular form of social entertainment. Whilst attempts to import the better varieties of tea from Isence have been conspicuous in their lack of success (it just will not travel), this has been more than compensated by the growing interest in developing the perfect tea-cake. Spices and fruits from far-flung systems and galaxies have been combined in a veritable cocktail of combinations in order to vie for this honour. While open-topped sandwiches are de rigeur as an accompaniment, there has yet to be much interest shown in their possibilities. Whilst the gavotte is the most popular of the dances at such events, it is being challenged by the Viennese Waltz and the Rhumba. A new Digebitian variant of the rhumba has emerged, and is proving very popular in the region south of the Walsinghams, and around the city of Lancaster.

Digebitian sculpture is justly renowned. Often using translucent greywacke carved from the mountain ranges bordering the Dismal Desert, the sculptors have famously developed a traditional style which is oft-termed (per-) Phidian. The most famous such is the Schemata of Noblesse Oblige, a rendering of the Feudal Principle using principles of numerological symbolism derived from Saint Phibo Nacci's majestic treatise on Theological Arithmetics. Placed above the cocktail throne in the capital, it inspires the gathered nobility with the representation of the source of their authority. Mention here should also be made of Arbuthnot of Digebiti, the renowned artist, whose works adorn a number of royal and noble manses across the systems of Santaari. He was fond of painting the heavens as seen from different locations. His masterpiece, the Maximal Occultation of the Ordinator of Octoid Reality, is displayed in the Fifth Apse of the Grand Cathedral of Digebiti, located in Greater Walsingham (some 300 miles from the capital). It shows Saint Giles slowly fading from immanence into transcendence. The Art Historians debate the precise location of the heavens therein depicted. The cathedral is also famous for the painting of the The Hounding of Ebortsa, displayed in the nave.

The current craze for Extreme Dominoes involves large dominoes crafted from Bemearan Walnut Wood and imported at great expense. The Dominoes are half again as big as a chap. Players usually stand on galleries surrounding the courtyards where the games are played, issuing instructions to those moving the pieces. The current champion is the Dowager Margravine of Outer Snoring, whose grasp of the deficiencies of her opponents is second to none. The larger households have already deputised some of their heftier footmen for this task, and a new guild of domino dominators is being formed. Attempts by the Guild of Sculptors to replace the wood with carved local stone have yet to achieve any success.

One of the local peculiarities are the catacombs of Greater Walsingham. A web of tunnels runs under the old city walls which contain elaborate catacombs from the time of landings. Carved into the solid rock, the tunnels run for miles and contain a number of underground rivers and waterfalls. Some of the catacombs are quite magnificent and professional guides offer tours with baritones chanting threnodies: the subterranean acoustics can be rather overwhelming.

The Digebiti Debates: Metafiction: Dialogues on the Lore of Xlite 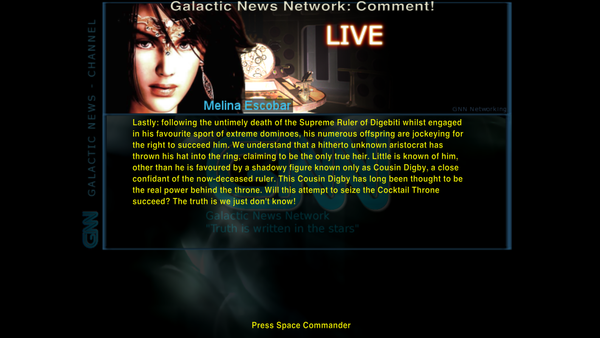 Debate includes the Cody-Stranger solution to the issue of why one can only travel in one direction around The Eight.