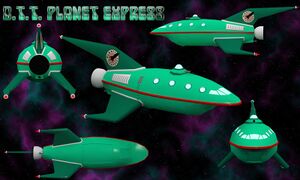 The DTT Planet Express may seem an odd choice; small, no longer in production, a poor weapons platform, and falling into the odd gap between small courier / combat ships and freighters, where it's desperately hard to find cargo contracts. But it's cheap at 100K credits, very fast, nimble, and looks so silly that it's easy to underestimate it; D.T.T. Ship Builders Inc. somehow managed to come up with a design that could take extensive modification, up to and including Naval shields and energy units, without any hit on performance, and nobody (including the company's own accountants) can figure out how they did it for the price. Some conspiracy theorists suspect that the small production run was subsidised by Naval Intelligence, who wanted a few innocent-looking ships for special operations, and deliberately came up with something that looked totally impractical.

For general use the biggest snags are the weapon systems. The forward laser is placed so far above the centre line of the ship that it's easy to miss at long range, the rear laser is below the single exhaust, and placed so that it fires through the exhaust flare if fuel injectors are in use. The design is so stupid that the aforesaid conspiracy theorists think it's deliberate; they reason that there's probably a naval variant with lasers mounted in the oversized rear fins instead. There are no side mounts, and only four missiles can be carried.

Weapons apart, the Planet Express is a dream to fly provided you're competent and don't let its speed ambush you. It's regrettably easy to launch, accelerate to full speed, then realise that you are within seconds of ramming another ship or the navigation beacon. The typical launch profile is a burst of acceleration followed by a desperate 90-degree turn. The bridge is large for the ship's size, again suggesting a possible naval role, giving this ship it's odd beaked appearance.

Ignoring the naval rumours, most of these ships are in the fast mail / passenger business; commanders with good reputations may also attract lightweight valuable cargoes such as gems or precious metals, but it's very difficult to reach that level with a ship this small, since there are few cargoes that will fit. I spent nearly a year getting to that point with the few small loads that came my way, and for a while regularly ran two or three valuable cargoes plus mail, passengers, and the usual trade goods. Then I missed a delivery date, and the only way to build up my cargo reputation again was to strip out all of the cabins to make room for bigger loads. Go through this a few times and you realise that there have to be easier ways to earn a living; I made enough money to move on to a Boa Cruiser and never looked back. But if you aren't bothered about cargo contracts the Planet Express is an excellent choice for passengers and packages, and can out-run or out-fly nearly anything it's likely to meet.

Reviewer: Commander Turanga Leela, formerly captain of the Shiny Metal Ass, with one of the rarer ships of the spaceways, the DTT Planet Express