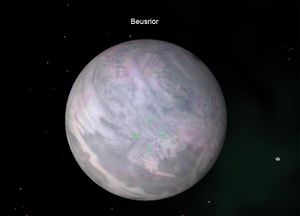 "A dull world says the register. In 2513 a large freighter broke down in orbit around this planet. The people had to leave the ship. The colonials built an underground base called New London as the whole surface of the planet is covered with snow and Ice. Day temperature varies between -22C to -40C but in the night the temperature drops sometimes below -55C." 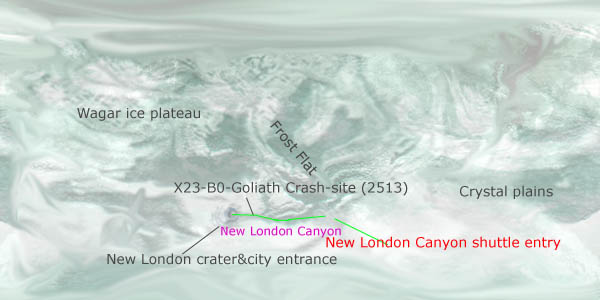 X23-BO 'Goliath' was a generation ship or freighter. It's how you call it. A navigational error caused the large ship (which did not have atmospheric capabilities) to enter too low an orbit. In 2513 the 'Goliath' plunged down with 3500 people on board. They were not lucky as they fell into the New-London Canyon. This canyon is about 9000 km long and ends in the so called New London crater.

The impact was hard. Thankfully due to the sturdy construction of the ship a few people survived. They found themselves in a harsh Arctic climate. After surviving the first 'Winter' the temperatures raised enough to organize an expedition. The second expedition exploded the New London Crater. They found a large cave network. The next year found the crew moving all the equipment to the cave. The crew were lucky that the lab and the engineering sections of the Goliath were only lightly damaged. After 2 years the cave network featured living quarters, workshops, a greenhouse (largely stripped out of the 'garden' section of the 'Goliath'. After 3 years the crew engineered an efficient climate system inside the caves. The underground city kept expanding and expanding. Nowadays the underground network spans the whole planet. The main entry and space-port remains in the New London Crater. An automated landing system leads shuttles, transports and traders to the docking platforms. 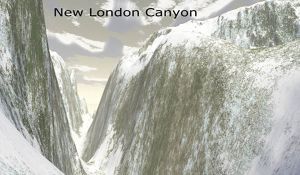