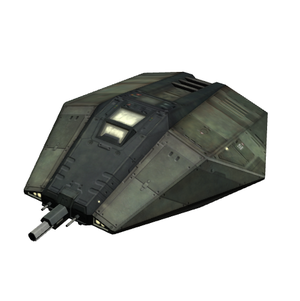 So, you've got some credits to spend. You've worked hard to get there and it's time to choose your ship. So be a real amphibian and pick like a winner and not some gonad deficient mechanoid.

Cargo space? What for? Trading?... Don't be an accountant when you can be a real frog. Trade is for the afraid. Pay your bills with kills. There's plenty of pirates around, let them pay your way every time they're foolish enough to attack you. No, you don't want cargo space, you want engines. Speed, more speed and just enough room to cram in a hyperdrive.

Missiles? They run out unless you've got room for half a dozen. No, you're thinking like a trader (spits), you want one missile pylon and no more. Just enough for a mine if it all goes wrong and then all that space you've saved gives you more room for engines, more engines and generators. You want room for more mines do you? Well that's you thinking like a gutless tadpole. You need speed to get out cleanly, to control the fight. More pylons means more size means bigger target. Either that or less speed and if you think you want less speed then you're just not thinking straight.

Recharge rate, that's what you want, not some poxy side lasers that you have to slow down to aim with. Why be a sitting duck just to get off a few badly aimed shots at some miscreant who's got the good sense to point the front of his ship at you while he's firing? No. You want lasers fore and aft and that's yer lot. Any more is just a waste and makes you fly like a lobotomised newt.

And why do you want recharge rate? Well, I'll save myself the half a planetary cycle it'll take you to come up with the answer and tell you myself. You want firepower and lots of it. Firepower and shields. Both of those things will need charging and when you're up to your eyes in trouble, the faster the better. Speed again you see? You really are green, froglet...

What you need to get into that thick, wide-mouthed skull of yours is that it's about speed, speed, speed. The three 'S's! Fastest engines, fastest generators, fastest damaging lasers. Anything else and you're losing speed. Now pick a ship.

Fer-de-lance? You're wrong... Cobra Mk III? You're wrong AND stupid... You know what, I'll tell you myself. There's only one ship worth choosing and, I'm obviously doing you a favour here as you don't know your fore from your aft, I'll spell it out for you. Asp Mark 2. It's that simple.

What's it like inside? You're thinking like someone who's never left an atmosphere. It's what it's like on the OUTSIDE that counts you fool! And what it's like on the outside is deadly. When were you last in water? Is your brain all dried out or something? No fancy interiors. Comfortable yes but not spacious because that means less engines and less generators and we know what that means don't we?... Yes, less SPEED! Took you long enough. You'd better wake up kid, cos not every pilot's as nice as me you know.

Military lasers, fore and aft when you can, and all the shields you can stick on it. Combine that with one of the fastest ships out there and you're in business. It's not a new design but folks got fancy in their thinking, forgot the three 'S's, they moved in other directions instead of forwards. So you'd better make sure you're thinking in the right direction or you'll end up on some colonial's menu!

Recharge is better when you've got the batteries to charge and five energy banks is more than that flying target that's the cobra mk III; just get above or below it and you can't miss. Five energy banks is nearly in freighter territory and the asp mk II charges faster than pretty much all of them. Five energy banks could keep even you alive, you clueless shuttle-droid! Asp... Mark... 2... Anything else and you're a flatulent toad.

My ship? No, it's a moray. Crashed the damn asp trying to dock it at half speed...

Reviewer: Boffrey Geycott
Straight talking, no nonsense (and no diplomacy either), veteran pilot. Some disagreement about his true skill rating but considers himself good enough to debate the best and (to his credit) has certainly 'been around the block'. Claims to hail from the planet Westrid and that he's currently under consideration for GLY certification (Galcop Legends of Yestercycle). Perhaps they're just waiting for his formal retirement...