This page focuses on two types of Ambience OXPs - those which affect all solar systems. Not those which just change one individual system such as Tionisla, or those which change minor details of the planets (PlanetForests).

Oolite's collection of Ambience OXPs is a rather rum selection. Some aim at scientific realism in varying degrees. Others aim at spectacular eye-candy. Written by human beings rather than disembodied organic brainlets, some are stand-alones whilst some form part of suites. Some just twiddle with the one thing (eg distance to the sun) whilst others do many different things (distance to the sun, colour of the sun, grade of quirium scooped from the solar corona etc). 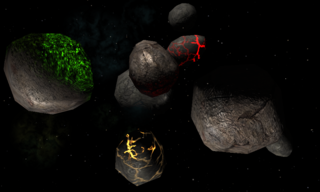 Griff's Glowroids (not yet included here)

Tweaking of the Vanilla game's one moonless planet for each sun model.

With the vast variety of OXPs out there, it is possible to mix and match. Here is one of LittleBear's tried and tested recipes:

Graphics improvements in the Vanilla game

This means that the most recent OXZs have been able to take advantage of these improvements.

...Rings, Solar flares, Quasars, Binary Stars, Black Holes etc.
Alas, we don't have much of this stuff in Oolite. See Cool OXPs for celestial objects. But we do have:

As regards Black Holes, Charlie of Benolubiweed fame worked on one back in 2006/7. Sadly, if you look in his Black Hole folder, you will find a Black Hole (and sadly, it seems to have swallowed him, too)! There are also one or two ideas here: Are there any Black Holes OXPs? (2012).