JazHaz is me, James Haslam.

It's a nick that started as a nickname of Jaz when I was in school in the early 1980's, and it was a logical extension to add the Haz part from my surname.

I started playing Elite at school soon after it was released in 1984. At the time the BBC Micros were everywhere in schools, and everyone I knew played BBC games such as Chuckie Egg (a great platform game), Revs (a Formula Three racing sim) and Elite. In fact somewhere I still have a 5 1/4" floppy disc with Elite on it (doubt it would load now though).

In 1986 I bought an Atari ST, and also bought Elite for that machine, and later still Frontier: Elite II. In 1998 I upgraded with the 32-bit Atari Falcon030, which is broadly compatible with the ST. Frontier runs even better with this machine. 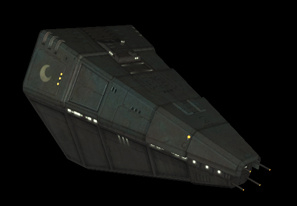 Have had several Windoze PC's since 2003. Currently use an MSI GE620DX laptop, that has an Nvidia GT 635M 2gb graphics card in it, and plays Oolite in full shader mode.

Having playtested a lot of OXPs over the years playing Oolite, I have compiled a list of OXPs that I would recommend to anyone to enhance their game, without restricting the gameplay for those people with slower computers. These are my top recommended OXPs (in alphabetical order).

BGS, or the Background Set is an OXP that enhances the menu system used in Oolite by providing background images. Depending on the version you install you can also have ambient sounds for each menu option and when outside the station, background radio chatter. If you have shaders on your computer, then the docking and hyperspace sequences are enhanced.

Essential OXP that adds support for adding big ships to your Ooniverse. It doesn't add any ships by itself, but gives any large ship some AI to not attempt to dock at stations where the docking port is too small.

Bloomberg Markets creates random events that affect the commodity prices in specific systems. Prices can go up or down, and it's up to the player to decide whether to take advantage of an event to maximise their profit. Requires Snoopers OXP to be installed.

This is an equipment item that when used in conjunction with the Scanner Targeting Enhancement equipment, shows the bounty another ship has. Helps you to decide if a pirate is worth attacking.

Adds a service to replace destroyed navigation buoys. In certain systems a huge orbital factory is added to make new buoys. This OXP can cause some slowdowns, but I've found that they are not too bad even when using a really slow PC such as a netbook. However its worth it as the stations are amazing, with ships coming and going, docking at a special dock.

Not an OXP as such, but is required by some OXPs, so I include it here.

An OXP made by Smivs, which improves the docking music to an actual orchestral recording of the Blue Danube Waltz, slows the main stations' rotation, and also lines up your ship with the station if you have to queue to dock, so you have a good view while you wait.

This OXP re-enables the Energy Bomb super weapon, that was removed from Oolite v1.77 for the sake of balance. If you want Oolite to have everything that Elite did, then you'll want this OXP.

This shipset replaces the standard ships with Griff's fantastic models. Best used on computers with shaders, however I have used them without shaders, and they are still good.

Adds Casino stations to certain systems. You can gamble your hard earned credits on a game of Ball and Cups. I never seem to win though. The stations are a good place to trade Liquor & Wines, and Gemstones.

Adds huge cruise liners to the spaceways. Can use Big Ships OXP if installed, but has its own AI if not.

Adds equipment to display the type of incoming missile. Required if you later decide to go for an anti-missile system, there are a couple to choose from (I don't recommend any for beginners though): Armoury OXP has one amongst other weapon systems, and the Automatic Chaff System (or ACS).

Adds equipment to process mined asteroid splinters, and extracts any valuable resources such as gemstones, hidden inside.

Gives you the ability to land on planets and moons.

There are several addon OXPs for Planetfall. The only one I use currently is the Planetfall Taxi OXP, which gives taxi missions to & from planets.

Improves the planet textures to some excellent ray-traced ones.

Gives a random name to other ships.

Adds equipment which enables you to find the elusive Rock Hermits. Requires the Advanced Space Compass to be installed.

Adds more ships in a similar style to Griff's ships. I used to fly a Staer9 Python Class Cruiser.

Adds rings to a few planets in each galaxy. Shaders, and Oolite v1.77+ required.

Adds a message to the comms log when you select an Advanced Space Compass mode.

Adds a huge space station in one system in every galaxy, eg Tionisla in Galaxy 1. The above link goes to the Oolite BBS thread for the OXP.

Adds equipment to give you system information on arrival from hyperspace.