It all started with the Budget Crisis of 3119, when the Co-operative finally realised the scale of the overspend on the project to upgrade the old Faraway wormhole navigation system to the new Witchspace Beacon network. Gross financial mismanagement is hardly new to the Co-operative, or even (sadly) uncommon, but the Faraway fiasco was of an entirely different order of magnitude. This hole wasn't going to be filled with some budgetary offset and a bit of creative accountancy; somehow, the Witchspace Beacon network would have to start generating income.

The idea of charging a levy on all ships using Witchspace was briefly considered, then discarded as a) unpopular and, sadly, b) impossible. Fortunately, a solution was found: the Ad-X Corporation was prepared to pay handsomely for the right to station giant TeraScreen advertisements at the Witchpoint (and, in some larger systems, outside the main station itself). 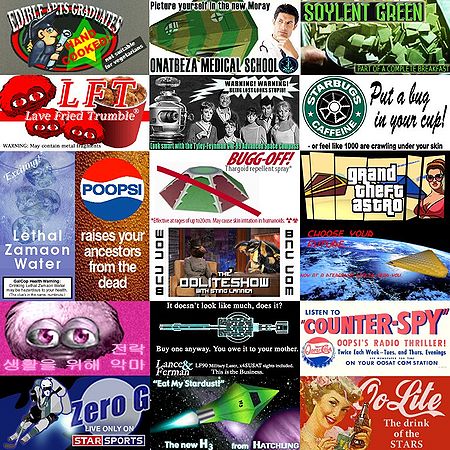 Just some of our favourite adverts!

It seemed like the problem had been solved. Unfortunately, the only systems prepared to accept unrestricted TeraScreen advertising were the Corporate States, the Democracies and the Confederacies. Dictatorships wanted to use the screens for their own purposes (usually, giant pictures of one Glorious Leader or another); the Communist worlds would have nothing but propaganda (and, indeed, have been working on a system of propaganda screens of their own); and the Multi-Government, Feudal and Anarchy worlds wanted a slice of the pie for themselves – one far bigger than their downmarket demographic warranted.

In desperation, the Co-operative cast around for other possible revenue streams. The various member worlds of the wealthy Corporate State voting bloc had always bridled at Co-op restrictions on the classes and quantities of commodities exchanged at main system stations, demanding "Free Trade" instead. Other planets in the Co-operative, fearful that their own domestic economies would be overwhelmed by an arrangement that inherently favoured the rich and powerful, had always resisted such demands. But faced with the possible bankruptcy of the entire stellar trading network, a compromise was reached: in return for a regular rent on the local Witchpoint volume, the Co-operative would allow a number of independent trading posts to be set up in systems with sufficiently high levels of economic, cultural and political cohesion – or, as some cynics have suggested, those systems with a big enough population to make the venture worthwhile.

Thus the Convenience Stores were born: franchise stations, based near the Witchpoint, offering goods and services to passing ships. Exempt from Co-op trade regulations, the Convenience Stores set about making money from every possible source. They are encrusted with advertising, and even the stations' defence craft – cheap ex-Navy Sidewinders – are plastered with logos and corporate sponsorship. Most controversially, controlled commodities – slaves, narcotics and firearms – are offered freely, and legally, for sale.

Within a Convenience Store, commerce moves at a rapid pace, and prices of even the most basic goods can fluctuate wildly. Some merchants, for commercial or ideological reasons, have abandoned the main system stations altogether; but cannier Commanders, balancing the reliable price index of the Co-operative against speculative capitalist bubble-blowing, can often exploit the feverish atmosphere of a Convenience Store to obtain impressive profits on relatively small quantities of goods. 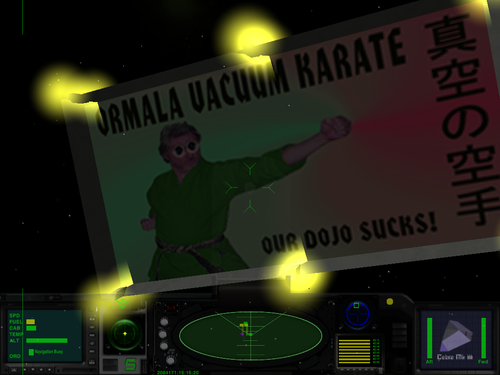 An Ad being used as a navigation buoy. 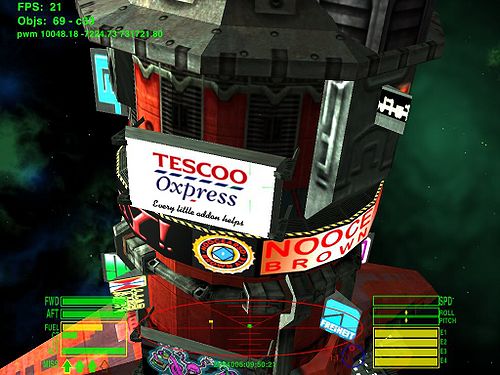 Do you want spam with that?

This OXP adds a lot of variety to the Universe. Witch-point and navigation beacons are replaced with giant bill-boards displaying adverts.

Every set features 50 different adverts and also adds a different type of constore to the universe (Set A introduces the Pi-42 constore, Set B the Tescoo Ooxpress constore etc). A constore is a dockable commercial base which is added to the space lanes of most systems with a large population. Also from version 4 and above of this oxp each constore has its own security force, the ships of which are skinned in the colours of the store they protect, and billboards will occasionally appear in asteroid fields of Corporate Systems.

All ads made by different Oolite players for a more varied visual experience. You can contribute with your own ads on the Oolite BB. Note that your ads must be relevant to the world of Oolite and submitted as 256x128 pixel images. Also for ver 4 and above all the artwork on the constores is a contribution of different oolite players

Constores follow population – you should find them in any non-Anarchy system with more than 4 billion inhabitants. There's an occasional overflow in prices in some convenience stores resulting in huge prices for food and textiles. Or incredibly low prices for narcotics.

No difficulty. It only adds ads and innocent constores to the universe.

To play the OXP, unzip the download file. This will create a forlder "YOUR_AD_HERE.oxp" and also several folders named "YOUR_AD_HERE_SET_X.oxp". In order to have a functional installation of your ad here you need the primary folder ("YOUR_AD_HERE.oxp") and at least one set ("YOUR_AD_HERE_SET_A.oxp" for examble). The more folder sets you chose to install the more the variety of the ads, constores etc you introduce to the universe. Move the folders you want under the AddOns folder inside your oolite installation

1.All the native constores have been replaced with variants of Griff’s Trade outpost (The original one with the ads).

2.Every station has its own dedicated defenders (Pi-42 security, Tescoo security etc) and every defender ship is different for each station.

3.Increase the maximum energy and maximum defenders of the constores.

4.Replace the buggy AI of the constores with the one Eric gave me. It is not so wise to attack a constore anymore!

5.Improve and translate (into JS) the script of the oxp. Now the script has a second condition (if the player is launched from the station) and also checks before placing a constore if there is already one in the system.

6.Increase the appearance of billboard buoys in systems with government above 4. Now the billboard buoys almost always replace the original buoys in confederacies, democracies and corporate states and not half of the time, as in the previous version.

7.Integrate Ahrumans shady billboards as a very rare encounter inside the asteroid fields of corporate states. Every set has only one asteroid billboard and it would be easily maintained for future sets with just the replacement of the png (with the same logic as the common billboards in every set)

1.All Constore brand name ads are made by DaddyHoggy and Pangloss.

4.All Constore roof billboards are made by Griff and Pangloss.

6.The sidewinder defenders artwork is Pangloss and DaddyHoggy’s job.

8.The station itself is a creation of (well, who else?) Griff. Also Griff with the new improved shaders gave us the possibility to have different stations in different colors.

9.Special thanks to Ahruman for allowing us to integrate its shader billboard demo oxp.

10.Special thanks to another_commander for all his help and support in the translation of the script.

This version has significant improvements and bug fixes from version 3. The most profound of the improvements is that the original box-style convenience store dockable bases have been replaced with variants of the original Griff trade outpost, but due to the use of JS and shaders for the new constores it is only compatible from version 1.72.1 and above.


Download Set G for version 4.1.x You must first install the basic package of version 4

This version has minor changes over version 4.0. Version 4.0 will no longer be able to orient the con-stores correctly in space when used with Oolite 1.74. Not a big deal of course but users of Oolite 1.73 and above should use the new version 4.1.1 that contains the corrected main script. Sets A till F are unchanged.

Added a buoy to the constores for ease of docking with them. Sets A till F are unchanged.

Removed a system specific problem for some linux systems not being able to read the billboard shader correctly.

Fixed a bug that all the constores had the same name and used the same defenders.

Fixed a bug introduced in version 4.1.4 were all stations get the same colour and some stores had white screens.

Fixed a bug that prevent a proper function with Oolite 1.75.

Download Ver 4.1.7 Version for oolite 1.74 and above. It only contains the main oxp (1.7 MB) and updates for the sets, but none of the sets itself. You should also download above 4.0 package for obtaining the sets A to F when you don't already have those.

Download Ver 4.1.7 OXP and Sets A-G Version 4.1.7 and fully updated (and in the case of Set G bugfixed - courtesy of Eric Walch) sets A-G for version 4.1.7 can be downloaded from this link. Or an alternative mirror is available here

YAH discussion topic can be found at the Oolite BB.

Simon B created an alternative shipset for the station defenders. When you install this oxp, the stations will launch defenders in the neolite style. Make sure the oxp loads after any of the sets. Currently the name is chosen so that it does.
"Download alternative defender set: Yaw_neolite.zip" (2.6 MB in size)

Market Ads adds the ads in the bottom corners

YAH Constore Removal OXP removes Griff's lovely constores (and their associated nav-buoys) from the witchpoint area, as some people seem to think that they unbalance the game.

Your Ad Here Constores Only suppresses all other buoy billboards added by YAH except for the Constores' own navigation billboards.

Your Ad Here Fuel Station uses ConStores as fuel stations. Be aware that this change makes the game considerably easier by allowing you to refuel right after hyperjump.

Your Ad Here Gem Casino adds casino games using gems as credits to the Con Stores from Your Ad Here.

Your Ad Here Mobile is a small add-on OXP by Thargoid which introduces ship-towed mobile billboards to the route one space lane of suitable systems. Requires at least one of the YAH ship sets to be installed.

YAH Witchpoint Override OXP restores the default witchpoint buoy (or any other that your installed OXP set may provide) in lieu of the large YAH billboards, which some Commanders seem to have problems not flying into on arrival in the system.