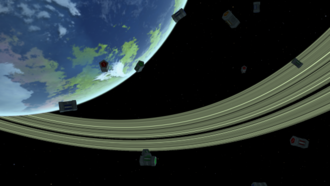 In the universe there is a lot of commercial traffic. Goods and documents are transported from one solar system to another. Like transportation on Earth, a small percentage of the jobs offered are on the open market. Almost anybody can accept such free contracts provided their ship has the right cargo capacity. However, most of the lucrative transport jobs aren't offered on the open market. You have to use connections to gain such contracts.

UPS is only one of the many organisations in the universe that delivers goods between planetary systems. Normally they use their own ships and pilots. On rare occasions they ask strangers to do some deliveries for them. If they do it well, the chances increase of getting more offers. Only the very skilled pilots get the best offers. UPS is present in the whole universe with business points in every solar system with a political level of Multi-Government and higher. They don't have their own combat ships to protect their transport ships, but rely on police and occasionally on unbound fighters like yourself.

Earning money is hard and competition is strong in the universe. For regular transport missions UPS pays very little. If you don't find the payment enough, go to the passenger / cargo contract market, maybe there is a better offer displayed there. But bear in mind: for their regular delivery pilots UPS sometimes has very well-paying jobs to offer.

This OXP adds several random mission that run simultaneously. There could be up to 5 missions simultaneously active. The first sets of missions that are offered are mainly various transport missions. After you run enough transport missions, a series of combat jobs is offered, but the main focus of the OXP stays at friendly transports. Consider the missions as a more advanced version of the passenger / cargo / parcel contracts that are offered if you press F4 (or F8-F8 on older Oolite versions). Unlike most mission OXPs that offer a story that is only run once, this OXP will continually offer random missions, but with a low probability of appearing. You will get an end message when the last type of regular combat mission has successfully ended and nothing new can be expected. Occasionally, however, some small variations on existing missions may appear. The OXP itself never ends as long as it stays in the AddOns folder of Oolite.

Most missions only work as long one stays in the galaxy where the mission is accepted. On intergalactic jumps those missions are aborted when there is no solution in the new galaxy, but a new mission will be presented soon in the new galaxy. So intergalactic jumping in the middle of a mission should do no real harm. Because of the nature of this OXP you can leave it in place and forget about it. It should be compatible with most other mission OXP's.

"Medium". The ships appearing in the OXP are within the power-range of the standard set of ships. No new type of ships are added, nonetheless, mission ships have more often than usual the maximum shielding and firepower for their type of ship. You wouldn't need a full Iron Ass to take them on, but you should have some basic upgrades fitted such as a beam laser, fuel injectors, an energy unit and perhaps a shield booster.

Until Oolite 1.76, the courier reputation was the same as Oolites own reputation for Cargo contracts. Both increased the same counter. But, as Oolite 1.77 introduces Parcel contracts and a reputation counter for it, it seemed logic to use that counter because of the resemblance between parcel and UPS contracts. (Small deliveries that don't take cargo space.) As a result, any build up reputation is lost and the player has to start building a reputation again. Doing a lot of the native Oolite parcel missions will help in this. Also make sure you only use version 1.8.2 or higher. There is a bug in all previous versions making you loose important equipment during one of the mission when playing with Oolite 1.77 or newer.

To install the OXP, use the in-game download manager to install. Alternatively, you can manually download the OXZ file (linked above) and place it in your AddOns folder (no unzipping required).