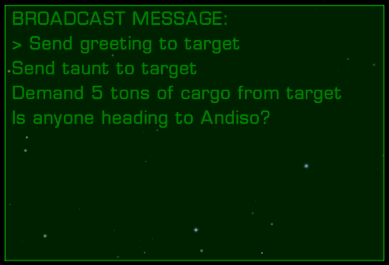 Once this MFD has been selected, use the b-key to select your option, and the n-key to broadcast it

This OXP provides a means by which the player can communicate in a real way with other ships. That is, the types of communications the player transmits will have a bearing on the game in some way, depending on the transmission type.

It seems like such a simple OXP on the surface -- you send messages to other ships -- but adds so much functionality to the game. All at once, you can find other ships heading your way in a convoy, you can bribe (with credits, a boon to those of us who don't carry cargo) or scare off pirates, or taunt them into messing up a shot. You can call for help from other ships or even the police.

Not to be confused with CommsLogMFD which keeps a long record of Vanilla game (non-Broadcast Comms) messages which you can scroll through.

The BroadcastComms MFD (Multi-Function Display) is available for purchase for 200₢ at all stations, regardless of techlevel.

For devotees of The Dark Side who wish to their OXPs to access these comms features, press here -> -> ->

For those in search of a more refined vocabulary and mode of expression, there is finally a Digebitian Variant available. Produced with the utmost skill and hand-tailored finesse in the workshops and laboratories of Lesser Walsingham, Xenon Industries are proud to present you with BroadcastComms Digebiti Variations.

If you wish for a taste, see here: Jack Sterling (profile by Smivs - see especially the link at the bottom of the page) & here (a rant about being diddled in the Shipyards). The thread with the fons et origo is here.

You can add this to your game by downloading BroadcastComms_Digebiti_Variations.oxz (also available through the in-game Expansions Manager - HUDs section).