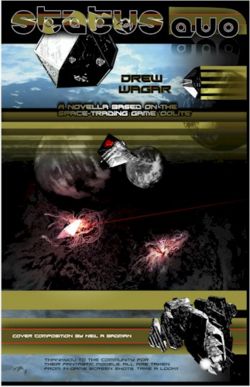 Status Quo is an Oolite novella by Drew Wagar. It is the first part of the Oolite Saga, followed by Mutabilis.

Status Quo was written to give newcomers to Oolite a feel for how Oolite differs from Elite in a the form of a story, setting the scene for all the adventures to come, rather like the original Robert Holdstock's novel The Dark Wheel set the tone for Elite itself.

It's set four years before the time in which players of Oolite find themselves.

Status Quo is set in the year 3138, four years before the official time frame of the Oolite game, which has been set as 3142.

The author also recommends the following OXPs be installed in order to make the game play as close to the novel as possible: BoyRacer, Tori, Famous Planets, Tianve Pulsar, System Redux, Behemoth, Imperial Courier, SuperCobra and Snoopers (which adds the Tionisla Chronicle news feed to the game.)