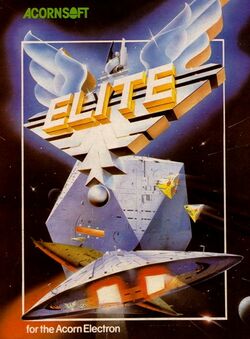 The Dark Wheel , a novella set in the elite universe and distributed with the original boxed elite game, expands upon the universe Robert Holdstock outlines in the Elite manual and introduces many new concepts.

It introduces the Ryder family, Alex and Jason. Alex watches his father die at the hands of an unknown Cobra pilot and almost dies himself in the process. His journey for revenge takes him to several places, including the fabled Tionisla Orbital Graveyard and into the hands of the legendary Dark Wheel organisation.

Though plot caution is intended, there may be spoilers:

Jason Ryder: commander of the Ophidian class trade ship Avalonia. Killed during the destruction of his ship by a pirate. Had a secret life as an Elite combateer.

Alex Ryder: Son of Jason Ryder. Survived the destruction of the Avalonia and dedicated himself to seeking revenge on the unknown pirate.

Elyssia Fields: a clone from the "clone world" Teorge. Rafe paired her with Alex because she was an excellent pilot but could not claim the honours of that for herself due to her clone status.

Rafe Zetter: a former friend and business partner of Jason Ryder's. Also a senior member of the Dark Wheel organisation.

Patrick McGreavy: a shady trader and associate of Rafe Zetter. Often trades in illegal goods or exotics. Has a known base on one of the stations in orbit around Xezaor.

What is The Dark Wheel?

The Dark Wheel is a secret organisation about which very little is known. They are known as dream chasers or legend seekers, since many of the stories about them involve them searching for legendary places or artifacts.

One of the legends they chase is the planet Raxxla. It is fabled to be a gateway to other universes, or at the very least a portal to somewhere else in the galaxy. Many parties actively search for Raxxla, but no-one has ever found it.

Is The Dark Wheel part of the Elite/Oolite lore? On the one hand, the novella came in the boxed set with the original game. But on the other hand, there are a number of glaring discrepancies between the novel and what one finds in Classic Elite. One such is the lack of planet earth and Sol in Classic Elite, but which is mentioned throughout the novel:

And the mechanics of jumping through Witch space are also very different:

The Dark Wheel has claimed him.

A young man narrowly escapes from the murder of his father at the hands of a mysterious bountyhunter. Pennyless, he nevertheless vows revenge...

There are a number of .oxp's which recreate some of the elements of The Dark Wheel within Oolite.

The novel is hosted by Ian Bell: read it here