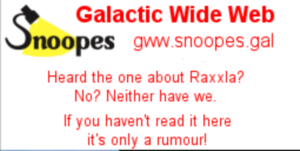 Raxxla is the name of a legendary planet, first featured in the novella The Dark Wheel by Robert Holdstock, which came packaged with the original Elite game in 1984.

Raxxla is prominently featured in the story Mutabilis by Drew Wagar, where it is an alien artifact, traveling through the galaxies and connecting them.

Raxxla is also featured in many Frontier stories, such as Jason Togneri's Darkness Falls, where it is the base of an evil group of Elite pilots who found an alien Gateway there to traverse the galaxies at will.

A fable as old as space travel itself, a mystery and an enigma: Raxxla. The very name causes conversation to cease, and meaningful glances to be exchanged.

The younger generation mocks it, until quelled by stern glares from their greybeard elders. Parents tell their offspring the story of a ghost planet, beyond witchspace, lost in the void. The name is interspersed throughout popular culture as a synonym for futility.

Pervading opinion suggests it is indeed a planet, but no one has ever seen it and lived to tell the tale. Its very existence is in doubt, its reputation spread only by hearsay via notorious borderland trading posts on the edge of inhabited space, far from civilisation.

Where there is any overlap in the reports that have come back, they seem to suggest Raxxla contains some kind of alien construct; a gateway or portal to... somewhere else. The nature of this device remains unclear.

A number of missions have been undertaken with the express purpose of locating Raxxla, some official, others less so. Some pundits have suggested Raxxla is guarded by a corps of ruthless, power crazed Elitists who will stop at nothing to preserve their anonymity.

A planet older than the Galaxy itself, a gateway to different dimensions or a power base for a clandestine group of Elite combateers; Raxxla remains as inexplicable as it is elusive.

There are many myths surrounding Raxxla, such as: