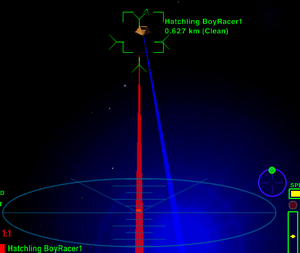 Such a small target

Before Hatchling released the first BoyRacer1, the characteristics of traffic near hi-tech system stations were quite different, as veteran pilots will fondly recall. Hatchling calculated from the very beginning that there was a hungry market for small, fast, luxury vessels, and the target customers reacted exactly as hoped. Far too expensive, colourful and useless for anyone with the need to make their livelihood in space, the BoyRacers are the favourite ships of bored, hideously wealthy youths.

Although they are quite fast and steer reasonably well, the Hatchling models all share a common trait in their vulnerable hull, which makes them an unlikely choice of vessel for anyone with serious space combat on the agenda. Nevertheless, as is often seen, young, unscrupulous and thoughtless pilots with too much time and money, have a tendency to stir up trouble.

As Hatchling sought to perfect their concept, the first BoyRacer was built as a minimal though luxurious compartment to fit the skeleton of only the essential engineering needed for high speed and intergalactic jumping. As the series has progressed, this has remained unchanged, and although improvements in speed performance and maneuverability have come about, these ships remain hazardous to take into battle. The makers insist however, that in the lack of bulky armoured protection lies its strength, as this allows the BoyRacer to be a 'near impossible target to hit', and no efforts to solidify the hull are expected in future models. Continued releases of new colour variation models, however, is a fairly safe prediction. 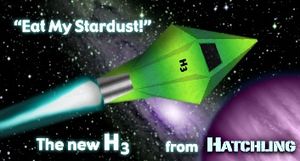 From the most recent campaign

Prior to unveiling the BoyRacer3, Hatchling chairman Ludo Van Der Budenmayer did little to dispel rumours that the BoyRacers would make a conservative shift in the direction of business travel and the courier market, only to present a BoyRacer with enhancements based entirely on suggestions made by their loyal fan cult. Although there is pressure on the company to condemn typical BoyRacer behaviour, Van Der Budenmayer often speaks up in their defence, and although no longer a youth, he is himself said to frequently fly about in BoyRacers while acting as obnoxious as any rich punk. Little is known about the BoyRacer2.

Those who take space travel and trade seriously have little patience for the stereotypical BoyRacer pilot. Although occasionally someone flying a Hatchling may actually have a legitimate purpose in mind, far too often there is absolutely none, and out of boredom they will attack and annoy those that have actual business to do in space. Their attitude has a particular way of getting under the skin of older pilots especially, since their unimaginative taunting usually revolve around the subject of age. It makes them no less cocky that in all probability they may say and do anything they please, and then disappear much too quickly to ever face any consequences for their impish actions.

Although unconfirmed by any evidence, there is cause to believe the story of Burle Pfaff, said to have been pushed too far by a BoyRacer gang calling themselves "The Zips". A seasoned trader in his autumn years, Pfaff was forced to draw upon 40 years of space experience, in order to survive an encounter with the dreaded gang by the skin of his prosthetic teeth. When he, and his beloved Wolf Mk II, eventually recovered, he made it his mission in life to seek satisfactory retribution. It is rumoured it took him 7 years to hunt down and kill every one involved in the offending incident, many of whom had since matured and moved on to more responsible roles in society, and never saw the payback coming.

Famously, he was himself killed while executing Biff Reese, the last surviving member and the leader of the gang. Having successfully ambushed the unrepentant young man who had long since put his BoyRacing past behind him, and caught his ship firmly in an inescapable clamp-lock, Pfaff went on to remind Reese of his past crime, before activating a Q bomb that would see them both dead. Reese made a run for it in his escape pod, but never came close to escaping the blast.