Rock hermit is a generic name for an asteroid that has been hollowed out for the express purpose of accommodation. This practice began in the early days of asteroid mining by prospectors looking for a cheap place to base their operations. Today, rock hermits are frequently occupied by retired bountyhunters and pirates seeking protection from the law.

Usually small traders are welcome to trade, swap gossip or to get robbed. Often Rock Hermits are home to shady affairs so narcotics can be obtained here at a low price. Food and luxuries are the stuff a hermit cannot produce, so these will go at a premium. Assure you get paid before you offload your fine Ineran Brandy though! Do not let the unglamorous name fool you: rock hermits are not defenceless. Most have a small fleet of ships ready to be launched.

Docking with a Hermit

Insofar as docking with a GalCop station is a similar exercise, some Rock Hermits do not rotate. Commanders should be aware however the standard dimensions of a hermit docking port as set down in the Hermit Almanac (see below), is a relatively narrow 138 x 138 x 330 (WxHxL). Given the standard hexagonal design. A tilted roll angle, keeping your wing tips to the corners is probably the best landing option for ships with a wide beam.

It is alleged that 'ColdCrushCorp' was the front for a massive smuggling ring. Xiibli was said to be the richest amphibian since the 'great marauder' Bloxfod Agriblad of Biabite. After 37 years of complete monopoly the 'ColdCrushCorp' was plunged into a financial scandal. The subsequent investigation promised to uncover corruption that went to the very top of GalCop. However the star witness Mau-Mau Mau-Mau, a feline from Soinuste (Chief accountant of Plyforth/Garand/Plyforth), mysteriously disappeared just hours before he was to take the stand. With Its reputation in ruins and a now hawk-like eye on its dealings from GalCop special anti-corruption department, 'ColdCrushCorp' was broken up into many smaller companies (who were greedily bought by ColdCrushCorp's previously intimidated rivals). Xiibli disappeared and many rumours circulated in dark corners of Corolis taverns about Xiibli having Hyper-spaced to Galaxy 4 to start a new empire of space junk yards. In fact the truth has only very recently been revealed that Xiibli had had a full body transplant and lived out his days as rock hermit dealing in gemstones & precious metals in the Atzaxe system until he was assassinated by Zau-Mau Mau-Mau the brother of Mau-Mau Mau-Mau. A posthumous DNA test revealed his identity. In excess of 100 tonnes of Gold was found hidden in the caves of his asteroid.

The demise of the Lavian Tree grub?

Weighing in at a hefty 14,000 pages, it is said that the hand-bound pages of Red Chaldo's The Hermit Almanac were responsible in part for the deforestation of Lave.

Covering such diverse topics as GalCop Asteroid excavation regulations (40 chapters) to the finer points of Galactic Brandy tippling. The Almanac will be found in any serious Rock Hermit's quarry. Antique hand-scribed versions (like the one shown) have been known to change hands for over 100,000₢. One particularly famous copy (said to have belonged to Chromebeard) was used as stake collateral aboard FurCorp heiress Magda DeMug's own CoachWhip liner in a no holds barred poker game. This copy is reputed to contain the only sure-fire prophylactic against the Hermit's Bane, apparently involving vast quantities of lethal spotted craboids boiled up in Dileonian lethal water and the resulting concoction dissolved in lethal brandy and the resulting salve then applied to the affected parts. This is usually regarded as sounding too much like someone's sense of humour to have any chance of success. The last person who tried it (another one of those eccentrics who seem to populate Galaxy 7 in vast hordes) died in the process, foaming at the mouth about some sort of Dawn Chorus, which must have been some sort of reference to the Orbelaxe Academy.

Other hermit-like stations added by OXP's 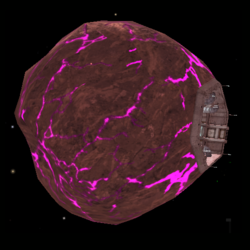 We have a couple in our community, people who disappear from public gaze and slowly, slowly work away on an oxp or two. Check out CommonSenseOTB's work on Oolite 2.0, Frame's work on Babylon 5 and DGill's work on Feudal States.