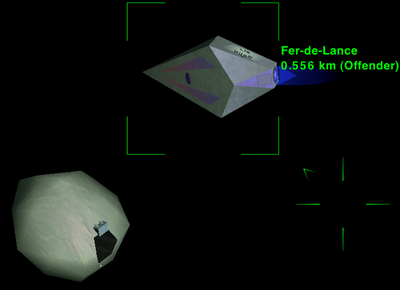 It's a trap! A pirate Fer de Lance lurking by his hermitage.

The Bane of Shipping

Ever since the earliest times of maritime and space travel, there have been individuals who have preyed upon those they saw as helpless and likely to yield a profit. They have gone by many names: privateers, reavers, brigands, buccaneers, marauders and 'alternative entrepreneurs'. However, most traders and the police force of GalCop know them as pirates.

These outlaws make their living by attacking trading ships, forcing them to dump their cargoes, so that the pirates can scoop and sell them at their leisure. It is a brave trader that refuses to dump his cargo as the predatory pirate ships rake his vessel with laser fire. One reason some traders refuse to lose their cargo is the enduring story that many pirates will not allow an attacked vessel to escape to inform the authorities of the piracy, thus forcing the pirates to take extra care should they end up facing squadrons of Vipers.

For this reason, entrants to the Flight Training Academy on Lave are trained in combat tactics and even use sim-combat to learn to defend themselves at least to a basic level of competence. On top of this there is the Federation of Elite Pilots' ranking system, with full endorsement from GalCop, to spur starry-eyed young combateers from the ignominious rating of 'Harmless' up to and including the immortal heights of 'Elite'.

Many Pirates live in systems where the law is decided by the strongest: Anarchies and Feudals, and where GalCop has little presence. While most pirates remain in these systems, many venture out and raid the space-lanes of more affluent neighbouring systems where trading ships are less likely to have squadrons of escorts accompanying them (and then flee back to their home systems when the heat gets too high). Squadrons of pirates roam the space lanes freely in these systems, their usual formation being one or more large cargo-carriers equipped with fuel scoops, and accompanied by a bevy of small fast fighters to swiftly tear apart their targets.

It is rumoured that in the more dangerous systems, pirates have the temerity to go as far as actually setting up a base of operations within the Space Lanes. Within this Pirate Cove the brigands lie in wait for passing traders. Occasionally, a battle-scarred ship will limp into dock and its crew will tell tales of an attack by Renegade Pirates slicing through their shields with multi-coloured laser beams. Whatever the truth of these tales, Commanders are well advised to keep a close eye upon the scanner in systems where pirates are known to lurk.

Cim wrote a Space-sim simulator (see bottom of page) setting up a basic ecosystem with pirates, traders and bounty hunters. It allows you to change the rules - ship performance, trade good costs, legal system, etc. - to see what effect this might have over time. It starts with some Oolite-derived settings.

Also see his thread: The Oolite NPC ecosystem (and other questions - where do pirates come from?)

See also the discussion here: System Populator Memory on the balance between realism and playability (2016).

Piracy as a career choice

OXP's doing both - and adding complexity