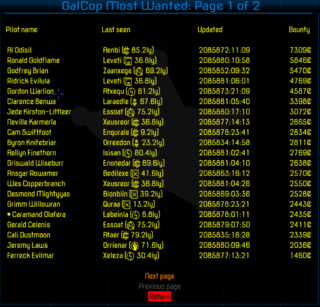 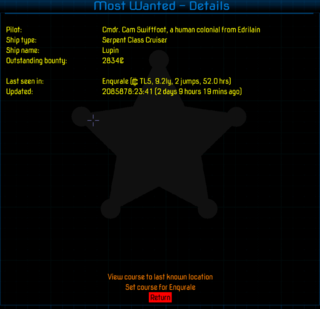 Basic details (without paying for license)

GalCop keeps a record of all offences committed by pilots throughout the eight charts. Sometimes pilots try to escape from their bounty by running. GalCop doesn't have the manpower to track down each and every pilot who tries to flee their legal problems, so instead GalCop regularly publishes a "Most Wanted" list. The "Most Wanted" list is available through the GalCop Security Office, accessible from the system's main station, or through the GalCop Security Kiosk, which is accessible from other GalCop-aligned stations.

This list contains the most recent updates concerning the criminals in question: their last known location, their departure time and destination (when they had docked at a GalCop-aligned station), and the type and name of their ship. When data is available, the last three locations the criminal was seen will also be displayed1, enabling pilots to track down where the criminal might be headed. When viewing the map to the last location, each of the last seen locations will be marked with a white or gray box. If GalCop doesn't have any location information concerning the pilot, this means the pilot is avoiding docking at main stations, so any tracking information is unavailable.

If you suspect the criminal is due to arrive within a small time frame, you can select the "Wait for time period" option1, which allows you to wait for anywhere between 1 and 12 hours. Any updates to criminal tracking information will then be displayed.

When a pilot tracks down a criminal from the most wanted list, they must use the Warrant Scanner to make the criminals offences visible in the current system. Destroying a criminal without performing this task will mean the whole bounty amount will not be paid to the pilot.

1 Premium features only available if you have purchased a Bounty Hunters Licence" (see below).

GalCop appreciates the effort and danger involved in tracking down and destroying pilots on the most wanted list. To encourage pilots, GalCop will pay pilots a bonus amount for each pilot taken off the list. You can see the details for your claims by going to the "Bounty bonus claims" menu in GalCop Security Office screen. This bonus amount can only be claimed at the GalCop HQ system in your sector.

If you travel to a new sector, the bonus amounts will remain - you can still claim them in other sectors.

Prospective bounty hunters are advised to purchase a "Bounty Hunters Licence" from a GalCop-aligned station in any Communist TL11 system or higher. This licence can only be issued to "clean" pilots, but by having it you will get access to additional information relating to wanted pilots that will greatly assist in tracking them down.

If your legal status becomes "Offender" or "Fugitive" while holding a Bounty Hunters Licence, and you dock at a GalCop-aligned station in a TL10 Confederate, Democratic or Corporate State system, your licence will be revoked.

Your licence will expire each month, but a renewal can be purchased for half the licence cost when you are within 5 days of your licence expiry.

Once you have your licence, GalCop provides a noticeboard service within the Security Office menu, where tips and information can be shared by other bounty hunters. The reliability of some of these messages cannot be verified, however, so hunters should be careful in making decisions from this data.

It is highly recommended to install the GalCop Galactic Registry OXP, which can help with tracking criminals along spacelanes, or between safe/dangerous systems.

This OXP is discussed at this forum link: http://aegidian.org/bb/viewtopic.php?f=4&t=19202