The Falcon Advertisement, the first of many

The YT-1300 light freighter, also known as the YT-1300 Corellian freighter is a highly customizable multi-role ship. Manufactured by Corellian Engineering Corporation and "imported" to GalCop space by Benulobiweed Inc. this craft became known as the Falcon. While various configurations are available, the best known are the Falcon and the Falcon-S.

On the planet Tezaeded in Sector 2 a pair of engineers (nowadays known as Q and A) came across a spacecraft that had not been broken up by one of the many scavengers in the system, indeed it appeared to have been abandoned and concealed within the sprawling scrap-fields that litter the surface of the planet.

Their investigation of the ship found that although a number of key systems were damaged, the main drives and navigational computer were still functional, so after a few patch repairs, they retraced the ship's last course into one of the unknown regions of space which was controlled by an independent Empire. While restoring the data from the main computer they learned that the vessel they had found was a trading ship known as a YT-1300 'Falcon', more important, a secret hyperlane showed up, leading directly to the mysterious Empire.

With this knowledge, they purchased a number of the YT-1300s and towed them back to their workshops on Tezaeded. After modifying and replacing some systems with their own designs along with several cosmetic alterations, they produced their first run of 'Falcon' traders.

The first ships sold within a month, and both men were stunned when they received orders for more Falcons. So many more, in fact, that they had to start hiring other hot-rodders and ship-builders with the promise of greater profits to come. Thus, a small 'cottage industry' swiftly became a stunning success with sales across the eight regions of the Galaxy.

a table with the most common Falcon configurations

This ship is based on the YT-1300 light freighter from the Star Wars universe. Below you find a basic blueprint of the original Millennium Falcon: 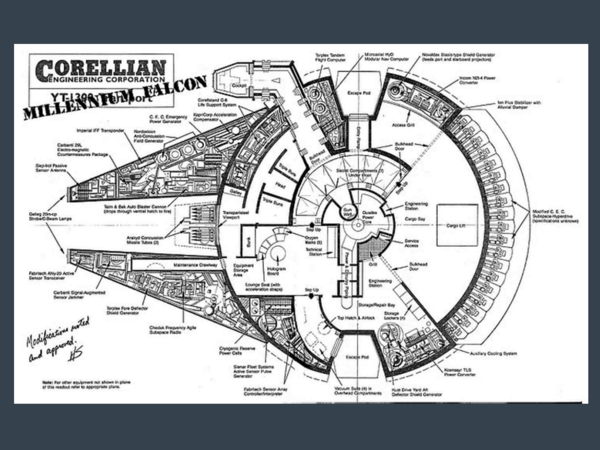 More background information and lore could be found at Benulobiweed Inc..

This ship/ships belong to the category Ubership, flying it will make you superior to most core-ships, but some opponents will be much stronger as well.

The Falcon is found in the Kestrel & Falcon OXP.