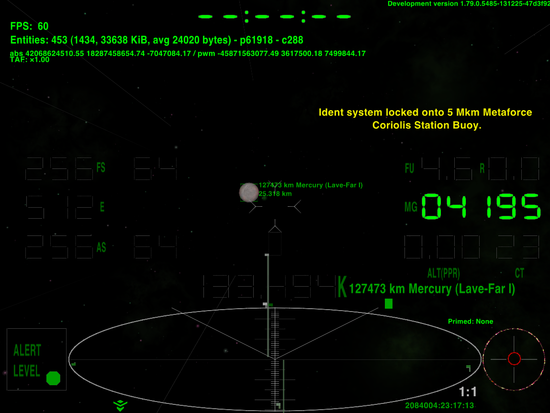 "Space is big. You just won't believe how vastly, hugely, mind-bogglingly big it is. I mean, you may think it's a long way down the road to the chemist's, but that's just peanuts to space." - Douglas Adams, The Hitchhiker's Guide to the Galaxy.

The planets nearest witchpoints are discovered first and are thus used most often, but many systems have other interesting places, especially out of sight! Using the newest technical improvements these are reachable today.

Your new pursuit is to deliver contracts to far planets, ie. very far from the witchpoint.

You can spend much time travelling to them: your clock will be forwarded to help tolerate it - or buy "Micro-G" equipment to arrive in reasonable time. Be wise: pirates can attack you both ways.

Contracts are obtainable from trader ships in space lanes if you go near them. Sometimes traders only spread rumours, but if you hear the same information from many sources then you may have found a valuable tip! The most important advice often comes from traders attacked by pirates after you save them.

Orbits of stations are as high as the masslock range of the planet - so it is possible to dock without planetary masslocking regardless of the planet size. If the station is at the opposite side then go around enough far enough to stay within Green alert.

Certain ships, such as the Andromeda are better suited for this sort of activity. 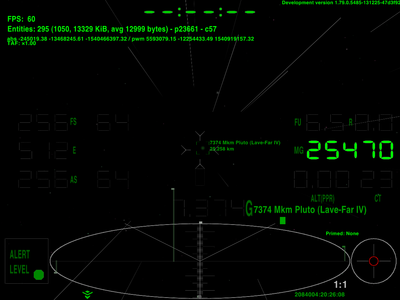 Your Torus Jump Drive can obtain extreme speeds with this extension if you are far from planetary masses and nothing is near you. They need some internal space, so they will fit into ships over 30t mass only, such as the Cobra Mark I.

Speed varies with the distance from both the sun and the nearest planet at long range, and is also reduced if a ship or any entity is approaching over scanner range also. You can generate a truly frightening speed as you get further the sun, but the gravity field of your target planet will slow you before your reach your goal.

The very large mass of the Sun will allow Micro-G speeds when you exceed the sun-witchpoint and sun-main planet distances. Forwarding will also be turned on over this border, if you lack the Micro-G equipment, so the journeys from the witchpoints to the far planets are not too slow.

If you leave the main planet then turn your back to the sun, hit the Torus-drive "j" key and your Micro-G will start when you are distant enough. If you travel to the main planet from a far place then align the planet into the center of the sun for the quickest route. You should go around the sun first at Micro-G speeds if the main planet is the other side of the sun.

When you approach a far planet and you want to dock at a station over the planet then check the distances: if the station is farther than the planet then you must go around to avoid the masslock of the planet. It will be faster to start avoiding the planet early when your speed multiplier is high. Lock the station (you need Telescope OXP to "lock it" when it is over scanner range) and then turn until the station is at the border of your screen and the planet is further in the same direction - even if out of sight. Then go forwards and turn slowly to keep the station near the border of your sight until you arrive at the center of the planet or the distance will be less than 200km - where you can then turn straight to the orbital station.

If you get masslocked in between, then turn your back to the planet and move away until you return to green alert. Then place the planet into your port or starboard view in a position where the station is before you (regardless of whether it is in your forwards screen). Go forwards and turn a bit periodically to keep the planet in your sideview. You can view forwards if you keep the lollipop of the planet exactly at your side in your scanner. After some time the station will be in your forwards sight. Keep it near the border of your view until you arrive.

Your performance will improve over time until you will know the best way to arrive at the station in a few seconds once you behold the planet.

This equipment is primable (with Shift+N): you can change the level of displayed messages using the activate key ("n"). The speedup always works automatically as soon as possible regardless of the message settings.

You can reach interstellar space between systems if you request it by priming this equipment and pressing mode ("b"). Sometimes there are "planets" (large asteroids, comets or other kind of rocks) with stations in these dangerous places, sometimes with high rewards but often with hazards too.

You will be warned before jumping if you forced to set your destination between systems using this mode. If you cancel the countdown then this setting will be cleared also, so you must set it again to confirm your intentions.

Take over the task if primary Micro-G is damaged and provide better acceleration if both are working. Cannot fit into small ships. 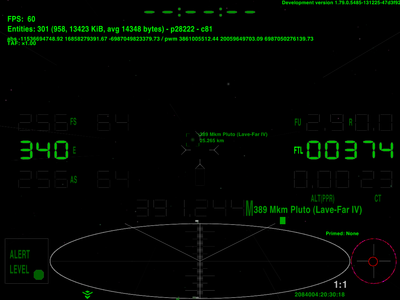 Some far planets are too far even if you use Micro-G speeds due to your ship being unable to move faster than 90% of lightspeed without using Quirium fuel. This Faster Than Light extension of Torus can do it until you have too little fuel left. Half of the fuel is used just for the necessary acceleration so at maximum speed one needs 50% more than at just over lightspeed. Do not forget to fill up your tanks before a long journey.

FTL can engage only if your energy banks are full and uses more energy at higher speeds. You will be slowed below lightspeed if less than a quarter of your maximum energy remains. Wait until your banks are filled and your FTL will be restarted.

There is a minimal gravity everywhere due to the mass of the galaxy which set the maximum of FTL Torus to 15 million times of your standard Torus speed. In a Cobra Mark III this is equal with 560 times of lightspeed. You will hit this limit in the case of the farthest planets so you need patience and refuel to reach these than others which are accessible in a few minutes.

See http://en.wikipedia.org/wiki/Micro-g_environment for a precise gravity table between galaxy, sun and planets. Micro-G uses rough linear approximations in order to behave similarly with this table.

Multipliers are applied to the maximum speed of your ship so you will be arrive sooner in a faster ship.

FTL Torus needs more internal space than Micro-G: it can fit into ships over 130t mass only, such as the Cobra Mark III. 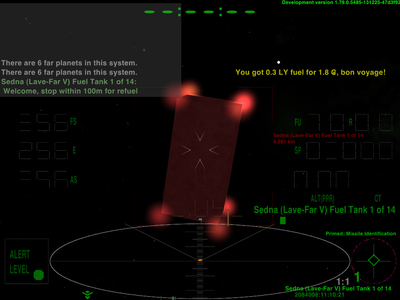 Farthest planets (like Sedna in Lave) need much more fuel than you can hold. To reach these you must stop at Fuel Tanks which are placed in the way. Refuelling will start if you are stopped within 100m of these. The cost of fuel increases the further you get from the Sun! You can also use one of the many fuel tanks (see Links below for a list).

Contracts with time limits need to use FTL but this equipment is vulnerable in combat so better if you keep your shields up on your long way and avoid fights.

Sometimes there are a few repair station near lanes from sun to far planets, otherwise it may be worthwhile to jump into a nearby system, get repairs and jump back to go along the road from the witchpoint again. A hyperjump is done within a few days but a farplanets trip without FTL or Micro-G maybe requires years to arrive, and may need several minutes to finish the time adjustment in addition to the minutes of forwarding if you have no Micro-G.

It is suggested to set a jump destination before travel to get a mark on your fuel gauge where you should save it to avoid getting stuck in the middle of nowhere in the case of a damaged FTL! 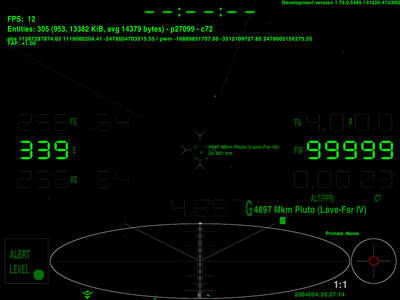 There is a mixed mode of Micro-G and forwarding if your FTL is damaged which can help a lot: you travel with 0.9 lightspeed using Micro-G Torus plus get 100x forwarding, so if you run out of fuel then you can wait until you arrive... but you will run out of time if you have urgent contracts. There is a smaller help also by 10x forwarding to regain your energy faster if depleted by FTL.

This little help also aids safe travel to the nearest far planets (within about 200 million km): you can reach these in an acceptable time without fuel.

As a last resort you can consider to use your Escape Pod (make sure you have one before a long journey!) but in this case you will lose your cargo.

Systems with low tech levels are harder due to no local repairs being available - but the payments of "far contracts" are higher in these systems if the government is bad as a compensation for that risk.

Provide better acceleration and double maximum speed if both FTLs are working. Can move faster than light if first FTL is damaged. Can not fit into small ships.

You can not use normal docking computers due to the inaccurate floating-point arithmetics in v1.77 (else you will collide with the station!). You must use the "instant" version (which will add 20 minutes) with "Shift+C" to dock.

Far planets in v.1.77 are at maximum only 10,000km distant from the witchpoint to prevent serious problems. Gas giants are left at their original distances (as otherwise they are unreachable with v.1.77.) There is no way to bring these enough near due to the radii of giants being larger than the maximal usable distance.

From v1.79 there is several million times more "space", just as in real solar systems: there are some planets 100 000 million km distant!

The "Sensors have detected x planets" messages after launching with System Redux or Deep Horizons Systems OXPs do not count these new "far planets". You will get a separate message about the number of far planets.

FarPlanets use very high quality textures but these are placed into separated OXZs due to the size. Please download FarPlanetsLave and FarPlanetsFamous OXZs below to get all textures, these probably will not change too often.

FarPlanetsLave OXZ is 56MB and contains: 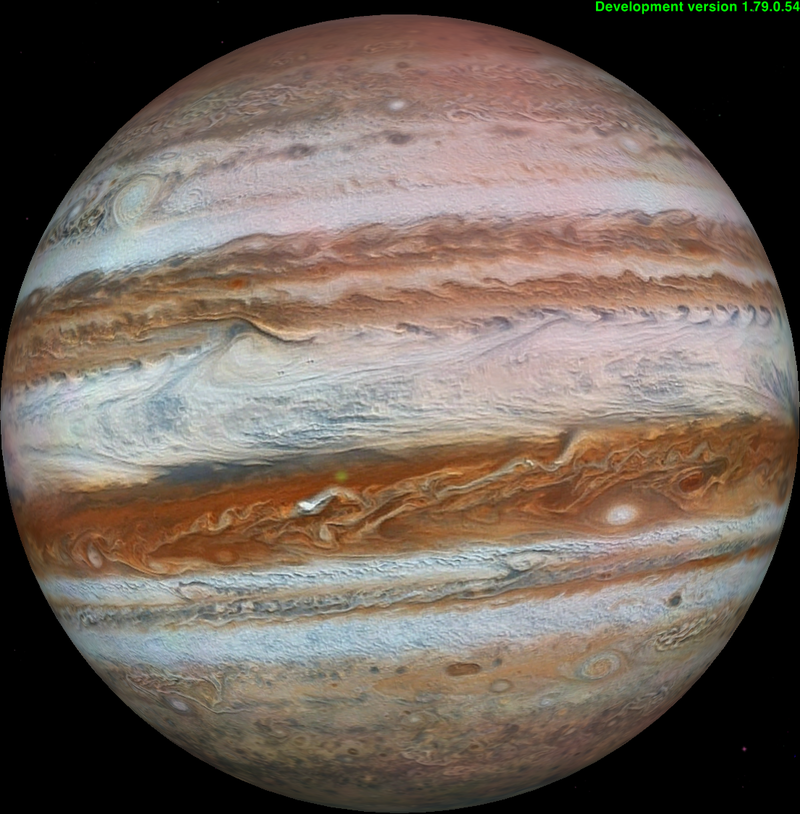 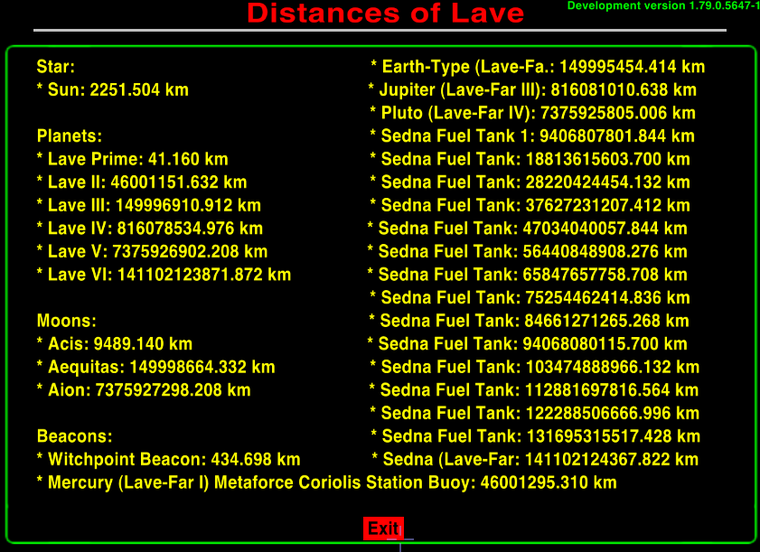