NumericHUDv3.13 is a compatibility update with Detectors, RocketShips and Towbar OXPs by Norby.

For many years the members of the vast Oolite Space-faring community have asked for and discussed the possibility/probability of a 'numeric-style' heads-up display (HUD) but with no solution in sight... until now!

Features improved numbers that are less distracting and which glow and pulse to draw attention to the gauges that need monitoring.

New HUD invention: creating numbers using selector drawStatusLight: which allows for both horizontal and vertical lines of a grey color or lines that pulse the color of the alert condition. 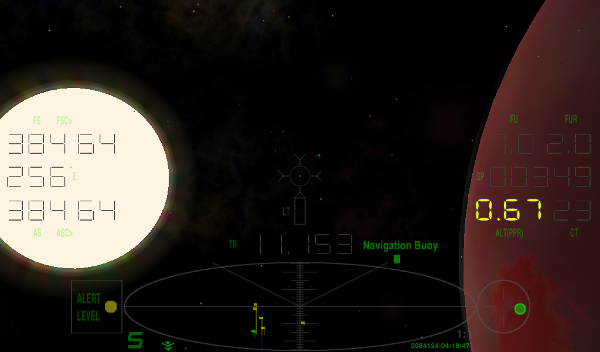 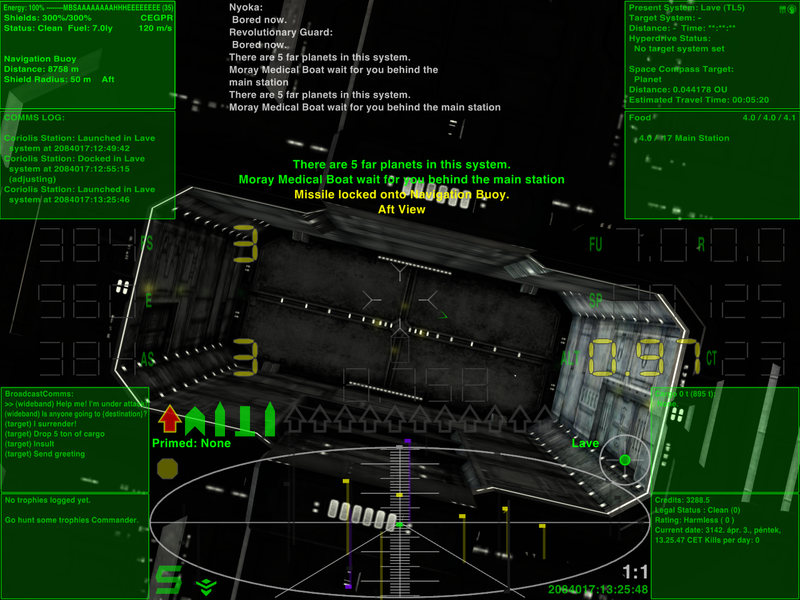 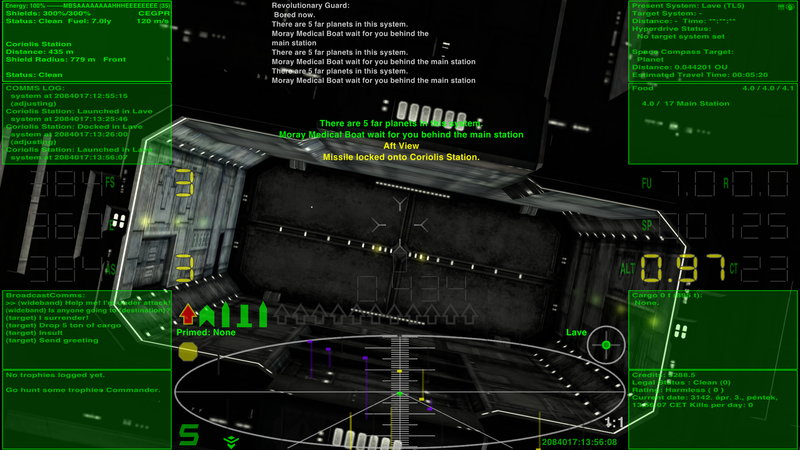 Another layout with 4*4 MFDs (selectable in HUDSelector): 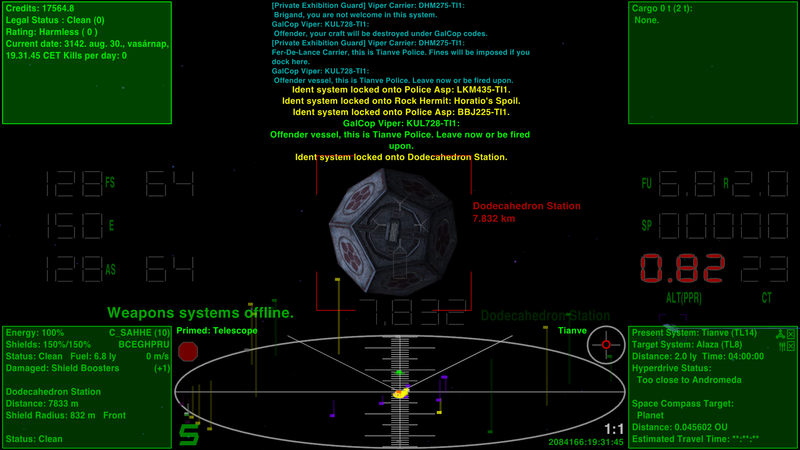 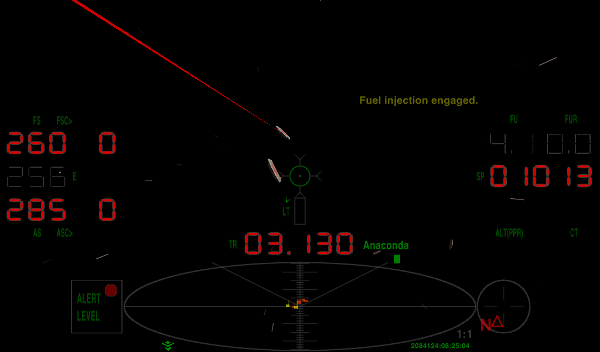 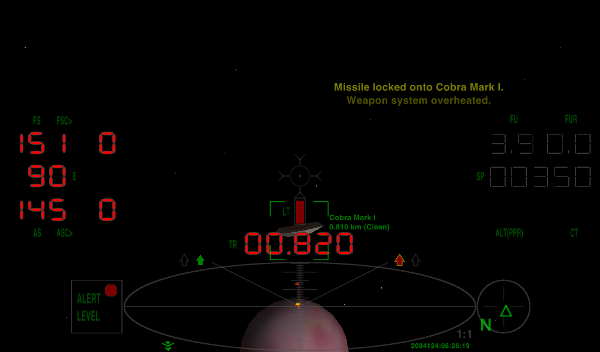 Features smaller numbers and is wide screen compatible. v2.1 also has a redesigned cross-hair (not shown). 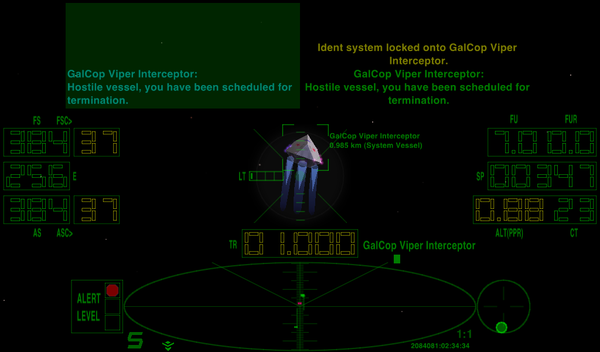 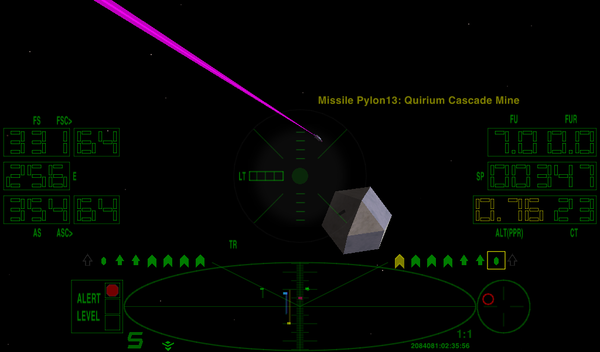 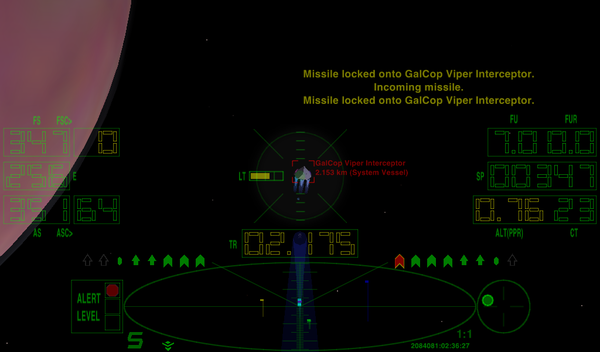 Condition green with no target 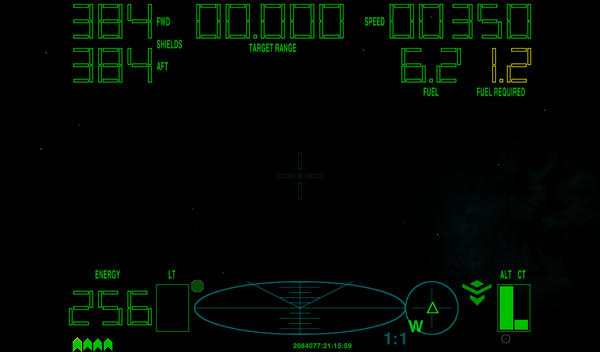 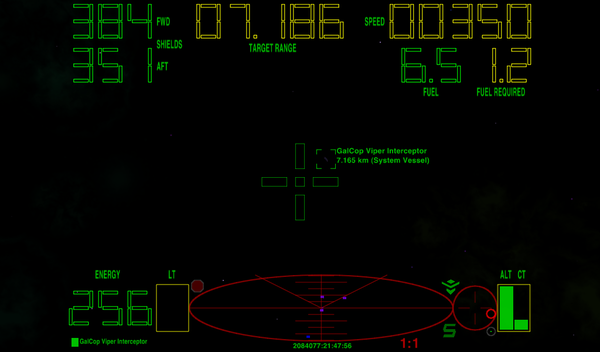 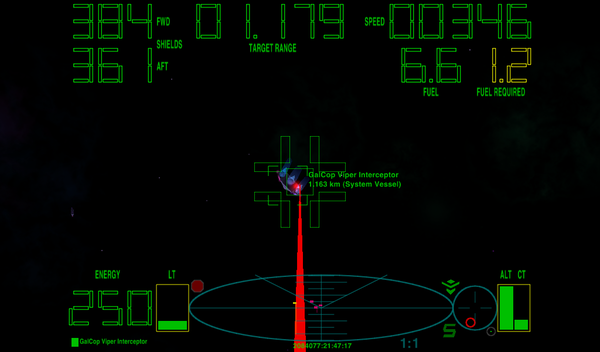 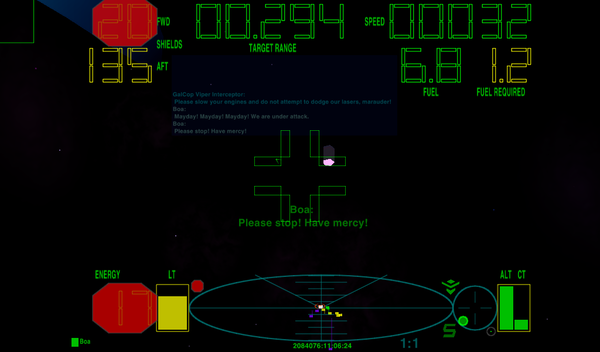 NumericHUDv3 is the latest version and takes it a step beyond version 2.1. As an improvement to version 2.1, numbers now really look like numbers and glow to draw attention. Specifically, shields, energy banks and capacitors when below normal, target range when target is hostile, speed when over normal max speed, altitude when within range of a body, cabin temperature when over normal, fuel when low, fuel required when over the fuel available to jump with. The idea was to only draw attention to gauges when required, otherwise the readouts are barely visible which helps prevent pilot distraction. The layout of this HUD and operation is essentially the same as version 2.1, just improved to a point I had envisioned when I created the original in June of 2011.

NumericHUDv2.1 is the previous version. It now has a redesigned cross-hair combining the stick sensitivity indicator with the built-in cross-hair. It also incorporates a smaller number set in a layout compatible with wide-screen monitors. New numeric gauges include shield capacitor readouts, cabin temperature readout and a PPR (Proportion of Planetary Radius) altitude readout. Some gauges now disappear when not needed. There is now a custom missile display with missile ID feature. At Cmdr Wyvern's suggestion a contraster from the MilHUD series has also been integrated. An alert condition stop light has also been added as well.

NUMERIC HUDv1.3.2 is the first numeric gauge HUD that uses arrangements of "draw surrounds" controlled by equipment activation in the hud.plist to produce a numeric gauge animation with the use of frame callbacks for frame-by-frame updating of the display. This is a first for Oolite and a must-see feature. Other features include the use of two colors and color switching to highlight thresholds of various gauges. Also a custom range-to-target gauge changes color to indicate the nature of the target. A fuel-required gauge is included to remind players of hyperspace fuel required for the target system. And finally, the scanner and compass change size, position and color to indicate alert condition and to provide ease/efficiency of use, all within the HUD without switching HUDs. There are also critical shield and energy warning lights and the first animated position adjustable cross-hair for all four views. Another must-see. The cross-hair has 10 size/shape configurations that grow/change as the range to the target decreases in an attempt to provide better targeting and accuracy in combat. The positions of the cross-hairs are adjustable in all four views to allow the player to match the ship's lasers with the sight more accurately. Also included is the first morphing main HUD with morphs for the scanner, compass and several icons that are triggered by change in alert condition. Finally, there is an escape pod HUD that shows the inside of the escape pod just prior to docking. Overall it is a fully equipped and very playable/usable HUD.

Docked HUD: unlike almost all the other HUDs, this one displays nothing while docked, leaving a nice clean screen for the F2-F8 interfaces.

Versions 1.1 and 1.2 were demonstrators of the hud.plist/equipment.plist arrays and scripts that make up numeric gauges.

Version 1.2 was also a demonstration of an animated adjustable cross-hair.

Version 1.3.2 illustrates the use of morphing animation in the swapping of various gauges and has an example of an escape pod HUD.

Version 2.1 has a full set of smaller numeric gauges with an improved layout and new cross-hair design.

Version 3 has improved numbers that are less distracting and which also glow/pulse to attract attention to the gauges which require monitoring.

NumericHUD v3.26 (downloaded 814 times) Similar with 3.25 but contain a small fix to hide HUD in some cases if needed.

NumericHUD v3.23 (downloaded 316 times) has independent MFDs for each view (16 in total), support narrow and widescreens and do less update by default to save CPU by Norby.

NumericHUD v3.20 (downloaded 212 times) positions tuned by Norby and ETA is deactivated due to Navigation_MFD.

NumericHUD v3.19 has better MFD positions by Diziet Sma and non-linear scanner turned on from Oolite 1.79. (downloaded 232 times). The Comms Log does not auto-display in this version of the HUD, as it would cover other instrumentation, and thus the player must use the Comms Log key "`" to view it.

Package in OXZ format for Oolite 1.79 or later but you can use it in Oolite 1.77 also if you make a NumericHUD.oxp folder into your AddOns directory and unzip this file into.

NumericHUDv3 is with improved numbers to prevent pilot distraction which also glow/pulse to attract attention to gauges which require monitoring.

NumericHUDv2.1 is the previous version with a redesigned cross-hair, smaller numbers, widescreen compatibility and some added numeric gauges.

NUMERIC HUDv1.3.2 is the original version and has morphing animated gauge swap outs triggered by changes in alert condition and an example of an escape pod hud.