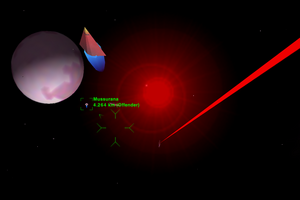 A typical pirate mob on an attack run

The best advice to honest traders is to simply avoid the kinds of places where pirates are common. Just as the best way of dealing with a Q bomb is to be somewhere else, the best way to deal with pirates is to be somewhere else. This advice is not always practical, particularly if you are a smuggler or supply some of the more dangerous systems. You may want to actually seek out pirates if you are bounty hunting. It is assumed that bounty hunters know what they are doing. The audience of this article is the small lone-wolf trader, who may be alone when attacked by a group of pirates.

For the lone wolf trader, to blunder into a group of pirates is never a good thing. You must be able to figure out the possible intentions of a ship or group of ships before you get within weapons range. If you're to survive long enough to get an iron ass, avoidance is the best strategy which must be commenced before you are in weapons range.

You don't necessarily need technology to have a good guess at another ship's intentions, and it is likely a new trader will not have the equipment fitted to help them. Be suspicious of the following signs:

A pirate group may otherwise resemble a typical trader formation: a large ship escorted by several fighters. Genuine traders try to get from the witch point to the station in as little time as possible, so will be travelling at full or near full speed. Genuine traders aren't known to loiter in space or travel away from the planet towards the witch point. If you see this behaviour, be extremely cautious - the small fighters are there to tear your ship apart, and the large ship is there to sift through the wreckage for your cargo. More experienced pirates may travel very slowly or simply loiter in space as to not raise suspicion by travelling the wrong way. If you find yourself gaining very quickly on a group of ships, it is quite possible that they do not have honourable intentions. Finally, a loitering lone fighter with cargo capacity (ships such as the Cobra Mk.III) may also be a pirate.

Pirates may use other tactics such as hiding within asteroid fields. Rock hermits should be approached with care to ensure that it isn't a pirate ambush.

It is also worth noting that sometimes you can determine that pirate-like activity is occurring well out of scanner range. Look for the flashes of distant explosions. You can then navigate around these regions and avoid coming within scanner range of the pirates.

Technology for recognising a pirate

One of the earliest upgrades a trader should seek is the Scanner Targeting Enhancement.

With this piece of equipment, you can find out the legal status of any other ship within the range of your IFF system. You won't have to wait to be attacked to find out whether a ship has a rap sheet or not. Dilligently use this equipment to inspect any other ships that show up within scanner range so you may plan your next actions accordingly. Be cautious of any ship that doesn't have a 'Clean' legal rating, doubly so if it is behaving as described in the previous section.

The standard IFF scanner can also help identify a pirate. The IFF scanner's artificial intelligence watches ships within range, and will usually spot agressive behaviour that indicates an attack, and flag the attacking ship in red instead of yellow.

Avoidance has failed: what now?

You must decide now whether to fight or flee the battle that is about to occur. To make this decision, you have to assess several things about your opponents:

You must assess this quickly and make your decision early. If you decide to plunge in and fight only to discover that one of the ships is a Rattle Cutter, it may be too late to try and flee. Discovering information in the heat of battle that would have changed your decision to go into battle at all is never a pleasant experience. In your decision, always assume the pirates are carrying missiles. It is extremely inadvisable to take on pirates without either an ECM or witch fuel injectors.

You decide to give them what they want

If pirates have demanded a tribute or payment in the form of cargo, you can dump some and hope that keeps them satisfied. You need to do this fairly quickly, otherwise the pirates might get in range and start firing on you anyway.

When you dump the cargo, make sure you dump it in a way that makes the pirates have to run to get it. Turn, and fly directly away from them, then pull up and dump. That should send the cargo on a direct line away from the pirates, meaning they will spend a bit of time chasing down the cargo and giving you more of a chance to escape.

You decide to flee

A decision to run must be made early. One of the best ways to get out of Dodge is to use your hyperdrive: is there a star system nearby that you can escape to, preferably a safe system? The decision to hyperspace must be made early. It's no good waiting for the 15 second countdown to finish while your hyperdrive warms up while the pirate group strips away what's left of your last energy bank. Hyperspace is usually only a worthwhile escape method prior to battle due to the countdown time.

You can also run (prior to battle commencing) by making a 180 degree course change and hope the pirates haven't spotted you yet. Wait until they no longer mass lock you, then turn so you are perpendicular to your intended flight path. Hyperspeed for a short while before gradually turning back on course, and steer around the area the pirates are lurking, until you are eventually headed for your intended destination.

Witch fuel injectors are by far the best method (so long as you have sufficient fuel). You can use witch fuel injectors even long after battle has commenced to escape, and few pirates will bother following you. This also assumes that they do not become damaged in battle, which is always a risk.

You decide to fight

You must identify which ships are most dangerous, and dispatch them first. Look particularly for beam or military lasers, or ships that have strong hulls. If you have witch fuel injectors, use them to pass the pirate group as quickly as possible - they usually don't expect this from a trader and you may be able to get behind them and nail one of their number before they can adjust tactics to account for your rapid movement. 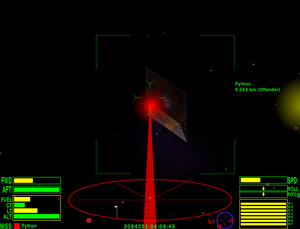 Deciding to fight: this pirate is hopelessly outclassed

Missiles can help since this allows you to attack multiple targets at once, however, don't waste your missiles if they get destroyed by ECM. If no one activates an ECM, you can tie up several of the pirates while you take one of them on with your main armaments. If your trade runs are profitable enough, consider ECM-hardened missiles.

If you hit a member of a pirate formation fast enough and hard enough, they may flee. If they do, let them go and concentrate on the remaining ships. It is highly unlikely that the runner will come back to have another go.

Weapons of mass destruction can also be used against formations of pirates, but they must be used with care. The energy bomb and Q bomb are indiscriminate, and will take out any clean ships within their sphere of influence, so only use them when you are sure that you won't cause collateral damage (especially if Police are coming to your aid; this is a great way to become a Fugitive). The energy bomb will destroy most ships on detonation, and the Q-bomb will destroy even the largest and strongest pirate ship. Be especially careful with the Q bomb as it is easy to suffer 'Q bomb blowback' where you fly into your own wave of destruction - if you run into your own Q bomb, an escape capsule won't help you.

This tactic is one for the truly desperate. The Cobra Mark III is fairly fast and agile. If you had decided to fight but found yourself outclassed and out-gunned, consider just pushing your ship to the max and running. Make sure to spiral a bit here and there and bob up and down. This reduces the amount of hits to your ship, allowing the shields to regenerate. Simply run for as long as possible and hope that some of the pirates are slower than you are. If that is so, you can either turn back and take out the lead ships before the rest can catch up and repeat this tactic, or you can just keep it up until they (let us hope) get fed up and try and catch slower prey. The basic point of this tactic is to a) Buy you time and b) Thin the pack.

In some systems, frequent Police patrols means that there is somebody who will come to your aid should you be attacked. However, don't rely on them being there. Unless you have Police within scanner range, assume that they are not going to get to you in time.