"Piss one of those things off, the last thing you're going to see is a sea of plasma green" Sector Chief, besieged Navy Sector Station 4-994.

There are many rare things in the 8 galaxies, the natural phenomena and then the sentient made from monuments to orbital grave yards. There are one or two oddities that fall into both categories, the Caduceus being one of them.

It is believed (according to several well read yet unofficial dossiers) that the Caduceus was the brain child of Udian Foraga Shulth, the youngest (and arguably most talented) son of the bio-maniac Mirias Shulth. Whilst several thousand books, personal testimonies, holo-recordings and overly sentimental documentaries have been penned as to the exploits of his father. Little is known about the formative years of Udian (most official records having been lost in the first great SHARD bio-purge). He does surface as a young adult embroiled in the new genesis war as something of an unlikely hero. Saving several sub-core trading systems from the gene-menace through the unlikely unification of celltec and nano-mechanics.

One of the few quotes directly attributable to Udian is also probably the most telling: "I don't build ships, I birth them. They are my children and like any good father I watch over them." Indeed most traders, pirates (who survive) or military personnel who happen to see a Caduceus, concur that there is something distinctly biological about its construction. They tend to be encountered cross station side of industrial planets, dropping in and out of the atmosphere delivering god knows what, to god knows where, for god knows who.

These ships although still rare are making something of a blossoming appearence in the eight. Despite the disparagingly small number of original Caducei, it was some what inevitable that the new biotec would be copied. Given the tenaciousness of the ship itself to want to heal. One could say it was a forgone conclusion that sooner or later some one would be able to coax a fragment of Caducei shrapnel to form a whole new ship.

This technique has not been countered legally or physically by the Shulth (not surprising as they still decline to accept responsibility for the ships creation), lending ammunition to conspiracy theorists that this was the intention from the outset. There is something hidden in the bio-mechanic DNA of the ship. Indeed the proliferation of these child Caducei has prompted some commentators to draw parallels between it and the invasive nature of the SHARD itself (media blocks permitting)

Although initially mysterious the properties of the Caducei have become fairly well known.

It would appear that these ships tend to be above average in most respects, lower top end in most categories. A speed 1 shy of half light, quickish turning circles, pitch and yaw, good shields and an apparent ability (as reported by station engineers) to successfully utilize a patch work quilt of non standard upgrades. More disturbingly, eye witnesses have reported the ship being capable of absorbing monstrous amounts of damage whilst retaining much of it's offensive fire power. Leading some ship designers to speculate that there maybe one or two specialist pieces of repair equipment (a damage control node?) that this bio-machine is utilising to 'heal' itself in flight.

The ship also appears to have some form of rotating thrust directors mounted over its two main engines. How these features adds to the ships performance, handling or otherwise improve the ship is as yet unknown.

From the initial 10 Caducei recorded by GalCop it would appear that some have been refitted. Certain celltec crack pots suggest that the ship goes through a growing process, that the 2 variants of alpha and omega are part of a wider arc of micro evolution. Little evidence has been sighted to support this theory however.

So far 10 separate "alpha" or adolescent ships have been documented;

Leaked military records recently reported at least one Caduceus has been confirmed destroyed (see above). This event occurred several cycles ago during a fierce Thargoid insurgency. It appears that the battle not only engaged the military, but also many reservists and privateers who were caught in the cross fire. Details are sketchy (the documents are heavily censored) but the battle appears to have taken place some where along the Lower Insurgency on the outer rim of galaxy 4 (probably Maindice or Learvexe given the speed of military intervention from Geonerbe). The ship in question seems to have purposefully manoeuvered in between several invading warships then proceeded to deliver a barrage of devastating broadsides, to both ships simultaneously. A tactic repeated several times until it was eventually overwhelmed by robot fighters. Although not pivotal to the subsequent rout of the invading fleet, the Caduceus' actions "significantly influenced the tempo of the battle" (Vice Admiral Mineemer).

The real eye opener for the military was the subsequent annihilation of the remaining Thargoid ships involved in the conflict 5 days later, and the complete sterilization of all Thargoid-held worlds within a 15 light year radius of the fleet. This count included two heavily defended system hatcheries. This has been suggested that this assault was a direct response from Udian Shulth. Possibly by omega-caducei, possibly by a yet unseen super weapon.

Despite ample opportunity for the GalCop military to sample Caducei "DNA" and derive a ship from it, no comparable military bio ship has yet appeared; this has again caused people to comment regarding a hidden agenda around the replication of these ships.

Dispatches from Naval HQ indicates it is involved in "sporadic but ongoing negotiations" with the Shulth family regarding the acquisition of hyper-biomechanical ship-building technology and any other advanced tech which may help secure victory in the on-going war. Indeed some maintain that said negotiations resulted the new Kirin military transport and lead directly to the Tibecea incident which cost the lives of over seven hundred and fifty civilian pilots and crews. A planet side memorial for the fallen at Tibecea, is currently under construction at the crash site of the Tibecean space station.

More recently,The Order of the Black Monks of St. Herod have been unavailable for comment regarding the loss of several of their dreaded Holy Avenger Mark II Tri-Laser Gunships or Black Monk Gunships, as they are more commonly known, apparently at the hands of one or more Caduceus pilots.

This also coincides with a reported alteration to the basic ship's shape. 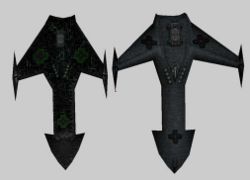 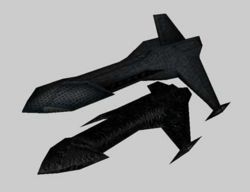 Whether this is due to a pan-galactic refit or some sort of spontaneous bio-mechanical "evolution" is again, as yet unknown. Despite the proliferation of these ships, It is still rare to find one of these ships not in the hands of a Shulth or one of their associates. Rare but still obtainable.

Given the multi-generational reputation of its pilots and masters, the mere reporting of a Caduceus in system has been known to empty orbit stations soft-bars of pirate informants, hackers and one shot cargo ejectors. Oh and if you see a ship-bay on station that appears to be empty but the dock manifest indicates it's paid for three times over, best not try and park in it eh?

Weather an overclass or a natural evolution of an alpha ship the Caduceus Omega is a fierce combatant, sporting an extra upper and lower super plasma gun (also known by other race commentators as the "sun-gun", "seelak-nur" and "the ruinous light". It is capable of causing catastrophic ship damage. Although evidence is still a little sketchy many consider this weapon pivotal in the kind of catastrophic system damage inflicted during the Thargon insurgency.

Omega class ships appear to be on the increase with several sightings over recent months:

Arguments continue as to which Caducei might be considered original and which are offspring ships. In combat terms, there appears to be little to no difference between the two. 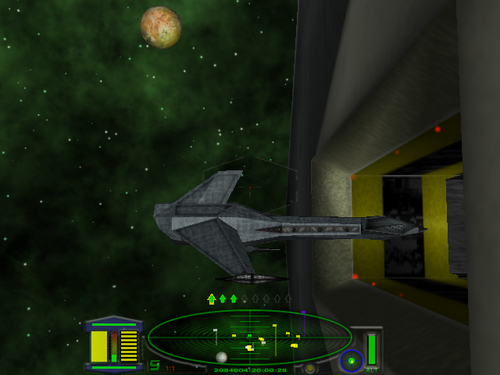 Publications of partially decrypted Caduceus bio-mechanic genome have recently lead to the birthing of some interesting variants. Still very much unique they do appear to be a near evolutionary step in natural selection. Most appear to "die" fairly quickly, although there have been some notable successes. As to the state of the reproductive "DNA" of these variant ships and if the selective process can be continued (without degradation), only time will tell.

The Dark Rainbow is also part of this family of ships.

This OXP would not have been possible without the support of:

Wyvern : Coding consultation, adoption and improvement.
another_commander: Shader code review and fixing
Eric Walch: Coding tips, cheats and work rounds.
Ahruman: For his vertex shader code
Griff: For his fragment shader code
Thargoid: For hosting above and beyond the call of duty.

Thank you to everyone who has downloaded this oxp and are helping to make a ship, a story in itself.

Clym's original oxp was just Caduceus. This newer version (2009, also edited for game balance, and with alpha & omega variants) came out just after the Neolite Ships debuted with their new aesthetic and was thus labelled Neo-Caduceus.