Tibecea is a member of The Royal Houses of Santaari. The nobility of Tibecea is of Italian descent. (Feudal States OXP).

The legendary lion of St. Mark is emblazoned across a golden background, emphasising the mythical Venetian background of many of the nobles and the financial foundations of their wealth, through trade and industry, and of course, their inclusion in the original Golden Book, fabled forerunner of the Sable Onomasticon. The portrayal of the left-hand side of the lion symbolically shows the nurturing side of the national leaders, who are sworn to protect their serfs. 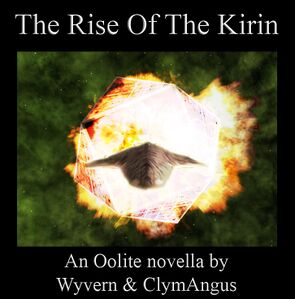 Rise of the Kirin cover art

Rise of the Kirin is a PDF novella bundled with the kirin.oxp collaboratively written by Wyvern & Clym Angus. Tibecea is the system where Rise of the Kirin story both begins and ends. It is used as a backdrop for a major space battle towards the end of the novella: the Tibecea Incident.

The Rough Guide to the Ooniverse also has an entry on Tibecea.

In Service to the Margravine

A recent putsch led to the downfall of Tsar Nikolas Zarakov IX of Oreseren. He fled with his family to exile in Tibecea. (In Service to the Margravine)