Cmdr.Svengali was born at a practically forgotten world at the outer rim of Galaxy 3 and absolved his flight training in a pimped Adder, build of spare parts and combined with more tape than anything else. After a few restless years he settled with a standard Cobra, cruising the eight.

GalCop has an eye on him, but it seems that his usual business of trading in narcotics and slaves and occasional acts of piracy are not enough to get him on the list of the most wanted fugitives. All in all a lightminded and rotten soul.

From the last interrogation protocoll, Soamaxe.

He's known to be friendly to cats though .-)

The only thing Cmdr.Svengali is really worried about, it seems, is the growing number of clashes and cheats out there. 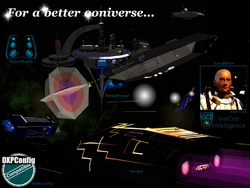 Collection of OXPs made by Svengali, some of them together with other members of the BulletinBoard.

The current development versions can be found -> Github.

BGS and GNN got a function to return usage info. Specially bigger scripts are unhandy and often enough it is not clear what you can or should use. The other AddOns may follow. Just use the console to get you started, eg.

Please note:   The following AddOns should be treated as deprecated. New versions are under development.

If you have a problem with one of them, please drop me a note at the Bulletin Board.

Have a nice one.
Svengali