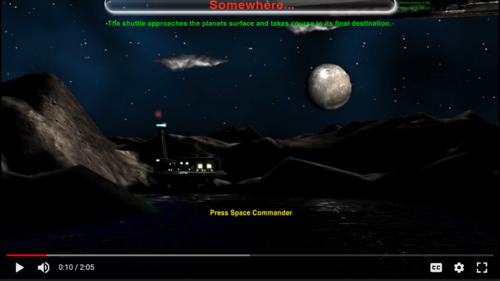 Svengali, Oolite's dramatic genius, produced this demo back in 2012 for Oolite trunk v.1.76. It needs a trunk version and Cabal Common Library.

After a little bit more tweaking (see Screenshots) a demo cutscene for trunk users is available - to make appetite for more...

The goal for the demo was to create a set of shaders for cutscenes. As you can see (filenames) it started as addition for the Vector OXP, but the shaders will be moved into Cabal_Common for the next version.

The advantage is that the scenes are real in-game mechanisms - using the same rendering engine has a pretty nice binding to the look and feel of other game mechanisms. The next step is to make the demo v1.76.1 compatible and sort out Audio stuff.

Cutscenes require some more work than just displaying a model on a missionscreen. To make things look right you need mechanisms to move elements (subentities), to sync movements and to get effects. E.g. models on missionscreens don't have speed == no exhausts. Via shader you can simulate these effects and framecallbacks can be used to move elements. Combined with overlays (or HUDs) and some dirty tricks you can create complete animated scenes. The demo shows some possibilities with a different lighting situation.